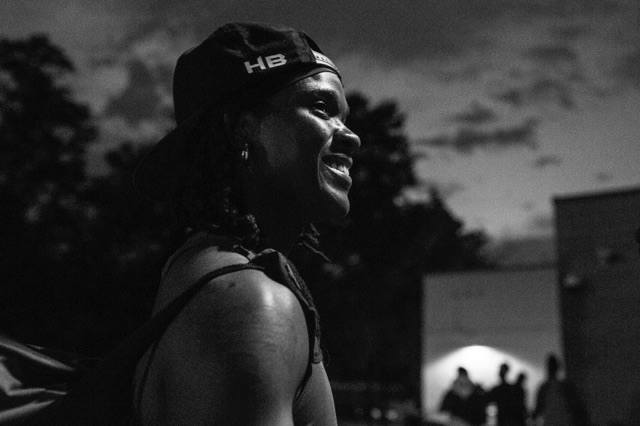 Tiara Brown: No Time to Rest

Get home from a long, tough day of work and the furthest thing on your mind is more physical and mental activity. You want your brain to shut off as you just rest. Put your feet up. Take off the edge.

Undefeated boxer and police officer Tiara Brown knows all about those grueling days of work, but ask her about rest and you’ll get a smile or a chuckle sent right back at you.

“You know, people ask me that. About that word, ‘rest.’ I looked it up in the dictionary,” Brown, with a laugh, told Combat Press. “The thing that gets me going is, I know there’s a time zone, so this is what motivates me. I know if I’m asleep, a girl in a different time zone is up and she’s training. And that’s how I look at it.

“When I was on the USA team, I would look at it that way. Well, we’re in America, and they’re in Kazakhstan or something, so they’re up already training and I’m still asleep. It just motivates me to get up [and] don’t complain, because at the end of the day the victory is so sweet. That’s what I think about. The ending is just so great.”

Brown has found success early in her boxing career. Before turning professional in 2016, she donned the colors of the red, white and blue to represent Team USA in amateur boxing. It gave her the opportunity to travel the world and build relationships with not just her teammates, but opponents, some of whom she still speaks to till this day.

Brown’s transition into the pro ranks has been just as successful. She has rattled off four dominant wins and garnered the attention of one of the most prominent promoters in boxing, Lou DiBella, who recently signed her. It was about time someone took notice of Brown’s success.

“I think it’s still kind of surreal for me,” said Brown. “I’m just very excited to be with Lou, and I’m excited that everyone else is excited. So I feel I’m sharing this with all my family, friends [and] fans. We’re all sharing this together.

“I’ve known about Mr. DiBella for quite some time, and I always thought he was the type of promoter that cared, not only about his male fighters, but who cares about his women’s fighters just as he does with the males. That stuck out the most, because a lot of promoters, they try to undermine women and still feel that women shouldn’t box. And Lou DiBella — he’s real, he’s truthful.”

Boxing has been, up to this point, a man’s world. Women have clawed and scratched to find relevance in the sport, and so many times have failed to do so. There seems to be a change underway, however. More people are pleading to have women fight on main cards and televised events. More people are noticing that the ladies can scrap too, and often at a level more impressive than their male counterparts.

“Now is the time for women to have the opportunity to be broadcast on a different platform, and I think that is due to women’s MMA and UFC,” Brown said. “I commend those women, and I’m very grateful and thankful to those women, because they have opened up the door for women’s combat sports. And now you see people more interested in women’s boxing. And you had Ronda Rousey versus Holly Holm, and that was MMA versus boxing at its best. And ever since then, more people want to see boxing.

The change is slowly happening, and Brown is right in the middle of that process. She is set to make history in the Washington, D.C., area, where she headlines an upcoming June 30 card. She will feel the weight of the pressure on her shoulders, because she carries with her the blessing and the burden of being a representative of women’s boxing. If she puts on a fantastic show, then she can silence critics who feel women should not headline a boxing card. Brown has been hearing all about this ever since she was given the chance to headline, but she’s dealt with far greater pressure before and overcame the odds.

“There is pressure,” Brown admitted. “This is the first time in D.C. that a woman has headlined a card. The promoter who is hosting it, he tells me everything, and he told me there has been people that have been like, ‘Why don’t you let my fighter be the main event?’ or, ‘You sure you want a woman to be the main event?’ He stuck by his guns.

“I’m one of the most accomplished boxers in the area. As an amateur fighter, I accomplished more than any male here. Why not let a female be the main event of a card? And the fight is in my district [where] I’m a police officer. Imagine the turnout.”

Boxing is a full-time job in itself, but Brown holds an even more important role in the streets of her community. Both jobs deliver gratification, albeit in different ways.

“Most of the time, I’m on a bike,” Brown said of her police work. “I’m a mountain bike officer, and that class is one of the most intense training to pass in the police department. Only the elite officers are allowed to be on the mountain bike, because they have to pass this rigorous training that a lot of them can’t get through. So, most of the time, I’m on my bike, patrolling certain areas. I patrol schools, I go see kids, I go through the neighborhoods, and everyone knows me. Everyone knows me.

“And it’s very gratifying to know, all right, it’s lunchtime, I can go stand on the corner and see a group of guys that some people might be like, ‘Oh, what are they up to?’ or they look suspicious, and I’m like, ‘Hey, how y’all doing?’ And they’re going, ‘Hey, Officer Brown,’ and that brings me joy. It brings me joy, especially during the times we’re in right now when everyone sees the news, everyone sees the social media, where there’s a lot of police brutality and there’s a lot of people that aren’t liking the police right now, and I think that it’s my job to kind of mend the community to trusting the police. They not only see me as a cop, they see me as a person — a smiling face, a boxer, athlete, a motivator, all of that — not just a badge.”

Brown is using her presence to facilitate change and show that D.C. is much more than a bleak, crime-ridden community the media make it out to be. It’s full of wonderful people. People facilitating a positive dialogue with all members of the community, young and old.

“Quite often in the community, we’re having events like every week,” said Brown. “When school was almost out, they had end-of-the-year career days, and I was requested on several occasions to come speak at the schools. And I like making bonds with kids, because it starts with them. You change the way they look at things and you change the world, really.”

The year 2018 has been special for Brown. Her success is no surprise, though. She’s a determined individual. Her skill set is among the best. It’s now time for others to see that in Brown. She’s a young, talented boxer with a big smile, a big personality and an even bigger punch.