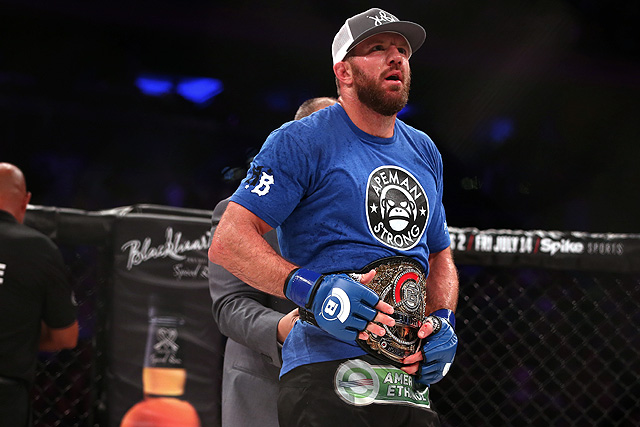 Bellator MMA heads back to school this weekend.

The co-headliner will crown the first women’s flyweight champion for Bellator. Ilima-Lei Macfarlane and Emily Ducote meet for the second time. In their first go, Macfarlane was able to take the fight by unanimous decision. Since then, Macfarlane has submitted Jessica Middleton and Ducote has won two fights.

Two former Penn State students are featured on the bill. The aforementioned former light heavyweight champion Davis returns to his alma mater and takes on undefeated fighter Leo Leite. Blue-chip prospect Ed Ruth also returns back to where he was a four-time All-American and a three-time NCAA Division I wrestling champion. The middleweight fighter meets Chris Dempsey.

Bellator 186 will also head to the lightweight division, where Zach Freeman takes on Saad Awad.

Ryan Bader puts his light heavyweight title on the line against Bellator mainstay Linton Vassell. Can Vassell prove that Bellator produces talent on par with the UFC, or will the UFC veteran Bader steamroll him for a successful title defense?

Bader for the win.

The UFC veteran would still easily reside in the top five among light heavyweights if he had remained in the UFC. Vassell, while a quality light heavyweight, just isn’t at that level. When Phil Davis made the move from the UFC to Bellator, it didn’t seem possible that anyone would beat Davis on his way to the title. When Bader made the jump, things changed. Now, Bader occupies that unbeatable role.

All it takes is one bad night for Bader to come out and lose the belt. Davis remains a possible threat down the line. In this fight, though, Bader should be able to win with relative ease. He has the vastly superior grappling skills backed, of course, by high-level wrestling that even allowed Bader to neutralize Davis. Bader, while not the best striker, has the better stuff on the feet, too. He has improved this part of his game over the course of his current three-fight winning streak.

Four of Bader’s five losses have come against dynamic strikers Anthony “Rumble” Johnson, Glover Teixeira and former UFC light heavyweight champions Jon Jones and Lyoto Machida. Vassell just doesn’t compare. Johnson and Teixeira have some of the most powerful strikes the game has ever seen. Jones and Machida are both so creative and diverse in their striking and seemingly unhittable. Bader’s other loss came to a “retiring” Tito Ortiz, but that was more a fluke loss than anything.

Bader gets this fight to the ground, where it won’t be pretty. He’ll use his wrestling to completely negate any and all offense from Vassell en route to an easy unanimous-decision victory.

Ilima-Lei Macfarlane and Emily Ducote meet to determine the new Bellator women’s flyweight champion. Who emerges with the gold?

After a long wait while Bellator built the division and signed women to fight in it, the promotion is finally prepared to crown a Bellator women’s flyweight champion.

Macfarlane has looked good since making her debut in Bellator. Out of all the women in the division, she appears poised to become the face of the women’s side of the Bellator roster. That time has now come.

Macfarlane did struggle in her Bellator debut, which was just her second professional MMA fight. Since then, she has won three of her four fights by submission. The lone fight in that stretch not to end before the bell? Her Bellator 167 outing against none other than Ducote. Macfarlane took the fight by unanimous decision. We can expect more of the same in the second meeting between the two ladies. The difference this time is that they’ll have five rounds to work, rather than three rounds.

Macfarlane’s striking has steadily improved over her six-fight career. Her submission game is obviously a strength — her three submission finishes came against some of the better fighters on the flyweight roster. Ducote can’t let Macfarlane dictate the striking game. If Macfarlane takes control on the feet, she’ll use her advantage to bring this fight to the ground, where she can easily add a fourth submission victory to her resume.

In the pair’s first fight, Ducote was winning the fight early by stuffing the takedown. When it did hit the ground, she was able to reverse Macfarlane. However, over the course of the next two rounds, Macfarlane was able to settle in and land the takedowns. Macfarlane took advantage of the positioning by trying for submissions. If Ducote looks to make this a ground fight, then she needs to be wary of Macfarlane’s guard.

Macfarlane should take the rematch, but she can’t start slow and needs to avoid a late fade like she experienced in their last fight.

We’re heading to Ed Ruth’s alma mater. Ruth, who has been a great signing for Bellator’s middleweight division, fights Chris Dempsey. Ruth has slowly been building himself up over the course of his three professional fights. Now, he gets a challenging veteran opponent. Ruth’s wrestling is an incredible thing to watch, and his pure athleticism gives him so much potential for the future. This is one of those fights that fans should watch as one of the first steps in Ruth’s MMA ascension.