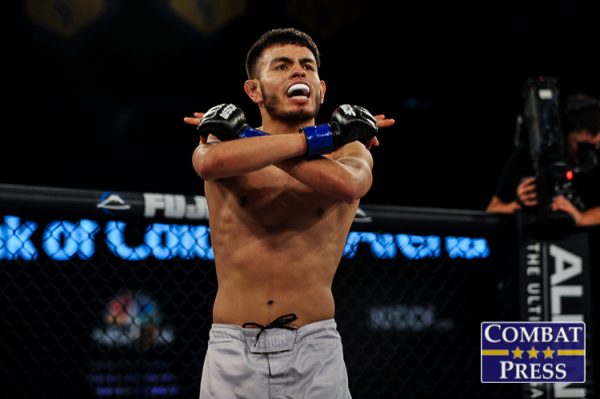 Factory X Muay Thai in Englewood, Colo., has quickly become one of the best MMA gyms in the entire state. At Legacy Fighting Alliance’s 39th show just a couple short weekends ago, one of the camp’s talented young fighters, Brandon “Raw Dawg” Royval, picked up another victory, albeit under strange circumstances.

Royval is no stranger to hard work. He sports a record of 7-3 and has been training in some form of martial arts since he was old enough to legally drive.

“I’ve been training for just about 10 years now,” Royval told Combat Press. “As soon as I decided to start training when I was 16 [years old], it was full-on competitive, training every day, putting in all the practices. I think being so competitive gives me the upper hand with a lot of things in life.”

Competition builds confidence, and it appears “Raw Dawg” has that in spades. How did Royval develop so much bravado so quickly?

“It all comes back to martial arts,” Royval explained. “As a martial artist, even when I was 16, it gave me enough confidence to not be afraid to pull over to the side of the road to help someone change a tire. I figure, if worst comes to worst, I can always choke them out.”

All kidding aside, Royval looked great in his most recent outing at LFA 39. However, the fight ended just 40 seconds in, when his opponent, Jerome Rivera, suffered a freak shoulder injury.

“I didn’t even realize what was going on in there,” admitted Royval. “I thought he was just trying to make space to get away. When I saw the replay, I was like, ‘Oh shit, that’s what happened!’ Even after watching it over again, I still don’t really know what happened in there to his arm.”

It’s a tough break, no pun intended. However, it’s unlikely the fight would’ve gotten out of round one anyway, on the account of Royval’s six first-round finishes.

A fast starter in every sense of the word, Royval wastes little time putting his opponents out of their misery. As for his goals? Well, those are just as lofty.

“By the end of the year, I want to be in the big show,” said Royval. “I think I’ve shown myself to be the most dangerous flyweight outside the UFC. Even in the UFC, I don’t think any flyweights hit as hard as me, and my ground game is even more deadly. I don’t think my guard has ever been passed.”

If Royval continues on his current trajectory, he will no doubt make it to the sport’s elite level. When this Factory X fighter does get his shot at the UFC, he’ll be out to not only be the “Raw Dawg” but to prove he’s the top dog as well.