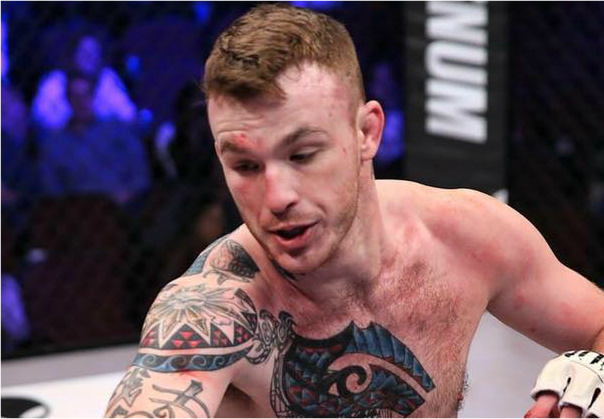 This is exactly the opposite of what one may hear on the roulette table at a casino. However, if you ask Mystic Lake Casino security associate Brandon Jenkins, he will tell you to always bet on red.

Jenkins is also a professional mixed martial artist who is getting ready to fight for the Legacy Fighting Alliance lightweight title on Friday night, and there is only one thing he wants to see in the cage.

“I want people to be excited every time I’m on a card,” Jenkins told Combat Press. “My fight is usually the best one on the card. I’m always trying to cut the guy open, and I’m always trying to get bloody. I always put it on the line out there. You can call me anything, but you can’t call me boring.”

In his 16-fight professional career, the Florida native turned Minnesota resident has spilled a lot of blood. He holds seven knockout wins. He has been to five exciting decisions. He has even tapped out a few opponents. He has only been stopped once. Don’t let his soft-spoken demeanor fool you. Jenkins is no stranger to violence.

“I started fighting in Florida and had about 30 amateur fights,” Jenkins said. “I started fighting because I got bullied as a kid. I had long, curly blonde hair, bucked teeth, and played a lot of video games. My dad bought me a gym membership and let me learn how to defend myself. I started training, and within six or seven months, I had my first MMA fight. From then on, I fell in love with it. I never thought I’d be fighting professionally on TV and stuff.

“I started fighting in Gainesville, Florida, and the MMA scene there wasn’t too big. I moved to Panama City, to a bigger gym, and I won a couple titles there — one in Alabama and two in Florida. I moved up here to Minnesota about four years ago, because there were more opportunities.”

In Minnesota, Jenkins is now training at American Top Team Savage in Prior Lake, which is also the home of the Mystic Lake Casino, where the LFA makes regular stops. However, when the lightweight standout applied for a job there, he didn’t know he would eventually be fighting for a title. He was really just there to help control the type of people who might get a little too upset if they crap out at the tables.

“When I moved up here, I started working at the casino where the LFA is taking place,” Jenkins explained. “I had never thought they would start doing [Resurrection Fighting Alliance] shows, and now LFA shows. I’m actually fighting for a world title at my job in my hometown.”

ATT Savage is only four miles from the casino, so it’s an easy commute for the young fighter. The training environment in Minnesota is great for the Florida native, and the training is helping to fill in some gaps from his initial training in the South.

“When I went pro, I was fighting a lot of wrestlers from the Midwest,” Jenkins explained. “Florida has a lot of jiu-jitsu guys and kickboxers, but up here, it’s a whole different animal.”

Jenkins’ first pro fight was in Alabama in July 2013, but since then, most of his career has taken place on the Midwestern circuit. He has fought for the LFA in his last three fights — two wins and one close loss. The loss was a tough one to stomach, but he bounced back quickly.

“Last fight, I was coming off a split-decision loss to Jeff Peterson, which a lot of people didn’t think I lost,” Jenkins said. “It was a really good fight and was really close. I came back and fought four months later against a submission specialist guy [Carl Wittstock], and I had a horrible weight cut and came in like 0.4 pounds over, and lost part of my purse.

“Every time I hurt this guy, I was kind of worried to go in and finish him. I didn’t want to blow my gas tank, so I never really put my foot down on the pedal. I had the guy hurt a bunch of times, but I never really went in for the kill. He kind of came back at the end. He never gave up really, and kind of got better. I needed to work on my conditioning.”

Jenkins’ fight against Wittstock was at LFA 29 just two and a half months ago. The win earned him a shot at Robert Watley, the current lightweight titleholder, at LFA 34 on Friday. Watley, who hails from Maryland, is 9-1 as a pro and is currently riding a nine-fight winning streak, which is a fairly even balance of knockouts, submissions and decisions.

“Watley’s a pretty intelligent fighter,” Jenkins admitted. “He’s really athletic, and he doesn’t make very many mistakes. He doesn’t take many risks either. He doesn’t mind going to decision to win the fight. He’s all about the ‘W.’ I’m the opposite. I go out there guns-a-blazin’, and I’m always looking for the finish. We have different styles.”

Jenkins may always bet on red in the cage, but outside the cage, he is a pretty reserved guy. However, one is likely to find him climbing, cliff diving or doing some other activity to enjoy the outdoor environment that Minnesota has to offer. Inside the cage, Jenkins is definitely not a boring fighter. He is primed to bring a stop to Watley’s streak and walk out of the cage with a new accessory around his waist.

“I’m hoping to get another win streak going and get a call to a big show,” said Jenkins. “I love fighting for LFA, though, and they treat me really well.”

Jenkins would like to thank his coaches and training partners, as well as the wrestlers from Augsburg University, who helped him train. Follow Brandon on Twitter: @KillerBJenks
Advertisement