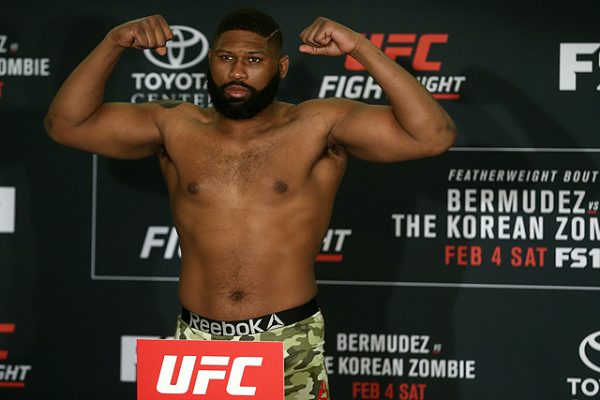 For all the talk of UFC 221 being one of the worst pay-per-view main cards in history, it turned out to be a really entertaining bunch of fights. We learned a couple things, too. Most notably, we learned that Curtis Blaydes is a legitimate top-five heavyweight. If he continues on this trajectory, he could even turn into the heavyweight champion that Cain Velasquez never was.

The Chicago-born heavyweight showed a lot of character and fight IQ last weekend against hometown favorite Mark Hunt in the UFC 221 co-headliner. Blaydes, an NJCAA national champion wrestler, dealt with some early adversity in the opening stanza when the “Super Samoan” connected with a flurry of looping right hands that nearly sent the Aussie crowd into a frenzy. Although rocked, Blaydes still had the wherewithal to land a perfectly timed takedown and regain his composure.

Blaydes went on to take Hunt down a total of 10 times — he just missed the UFC record of 11 held by Velasquez — and threw in a couple of nice belly-to-back suplexes for good measure. Blaydes stuck to the game plan for the remainder of the fight. He took a unanimous-decision win back home with him to Colorado’s Team Elevation.

What’s next for Blaydes?

Well, he would love to have a quick turnaround and fight in Chicago on June 9. UFC 225 will be the first time the Octagon touches down in the Windy City for a real UFC pay-per-view card — the city hosted back-to-back years of Fox cards, but we all know that’s not the same.

Blaydes is a little pissed off that he’s not in the new UFC 3 video game, too. In his post-fight interview with Megan Olivi, the up-and-coming heavyweight said, “I’ve beaten two guys that are already in the game: Aleksei Oleinik and now Mark Hunt.” Fans of the game are probably just as disappointed.

The idea of Blaydes getting to fight in his old stomping grounds is great. There’s always the idea of a title-eliminator, but his possible opponent should be the winner of this weekend’s UFC Fight Night 126 co-main event between Derrick Lewis and Marcin Tybura.

In that scenario, you can bet the UFC would be crossing its collective fingers and hoping that the “Black Beast” is victorious, thereby setting up Blaydes to fight Lewis in Chicago. That heavyweight title-eliminator fight would be downright exciting, and the UFC would have four months to build it up.

The UFC has done an admirable job of bringing Blaydes along. There’s no reason why the company would drop the ball now. With his wrestling pedigree and ability to stand with some very intimidating opponents, Blaydes looks like a second coming of Velasquez. Can he be the dominant, long-reigning heavyweight champion that we all thought Velasquez was going to be? That remains to be seen, but if you take a look at the top 20 heavyweights in the UFC, who has a better chance at a dynasty if not the kid from Chicago?