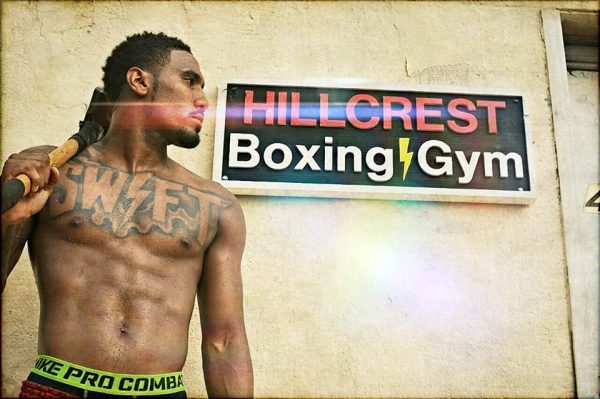 Jarrett Hurd: ‘This is a Statement Fight’

On Saturday, Oct. 14, the 154-pound division will be at the forefront of the boxing world. There aren’t just one or two title fights, but three championship affairs that will take place at the Barclays Center in Brooklyn, N.Y. Six of the division’s best will be out there to convince fans they are the king of the weight class.

In the main event, Erislandy Chara defends his WBA title against Terrell Gausha. The co-headliner puts WBC titleist Jermell Charlo against Erickson Lubin. And in the opening fight of the stacked card, Austin Trout returns to take on IBF champion “Swift” Jarrett Hurd. For Hurd, who is undefeated through 20 fights with 14 knockouts, it’s been one hell of a ride.

“It’s crazy,” Hurd told Combat Press. “This whole journey is overwhelming. There was a time when it was hard for me to even get on a card, because people didn’t think I’d bring fans. I didn’t have a big amateur career. Promoters were skeptical of putting me on a card, and now I’m a world champion.

“It’s just amazing, being from a small city of Accokeek, Maryland, and other boxers now in the area look up to me. It’s been a blessing. I mean, no one had ever thought Jarrett Hurd would be this. For all these guys that I looked up to when I started boxing, these champions, and trying to follow their footsteps, and now I’m the world champion and these guys are calling me asking to train with me.”

Hurd took an unconventional route to championship status compared to his peers. There were no Olympic trials or qualifying, let alone an extensive amateur career. Here is a boxer who wasn’t hyped when making his pro debut. He wasn’t signed with some notorious promoter who was slowly building him up as a blue-chip prospect. Simply put, Hurd had to earn his right to be taken seriously.

“Keystone Promotion was the first promotion that picked me up, and they started putting me on their cards,” explained Hurd. “I started headlining them and they started to see this guy’s the real deal. They put me in the ring with a guy named George Armenta, and they thought this was gonna be my toughest competition. I got a second-round knockout and got recognized for 2013 ‘Knockout of the Year.’”

“After that, other promotions started to call and wanted to pick me up. Keystone wanted to keep me long term. Then we reached out to Al Haymon and he wanted to see me fight. I headlined a fight in D.C. and got another knockout, and he sent some of his scouts to come watch me. That was when I eventually got picked up by Al Haymon.”

Haymon is a name that resonates with almost every boxing fan. He’s a world-class promoter. His eye for talent is one that is hardly matched, so when he comes calling, you pick up.

Hurd has convinced Haymon that he’s a top boxer. He wouldn’t be on this card if he wasn’t. Now, it’s his turn to convince viewers. It’s a talent-rich division, with many of those top talents on display Saturday evening. This performance against Austin Trout, whose record sits at 30-3 with 17 knockouts, can go a long way for Hurd in proving his name belongs with any boxer in the division.

“This card is the display of the 154-pound division,” Hurd said. “This is a statement fight for all three of the bouts. There’s gonna be comparisons all night between all of us. And a win over Austin Trout and the fashion I do it in — if I can be the only one to stop him, because, in his three losses, he hasn’t been stopped — it can separate me from those guys that beat him but had to go the distance. A stoppage would be a big statement for me [on] Saturday Night.”

Trout’s three career losses — all decisions — have come to the aforementioned Charlo, Saul “Canelo” Alvarez, and Erislandy Lara. A knockout of Trout would indeed be a statement for Hurd. It would also be an opportunity to set up an even bigger 2018.

“2018 is the year of unification,” said Hurd. “I do have a mandatory afterward, but that can be pushed aside if we can get a unification bout. Hopefully, the business side of that works, because I want to unify these belts.”