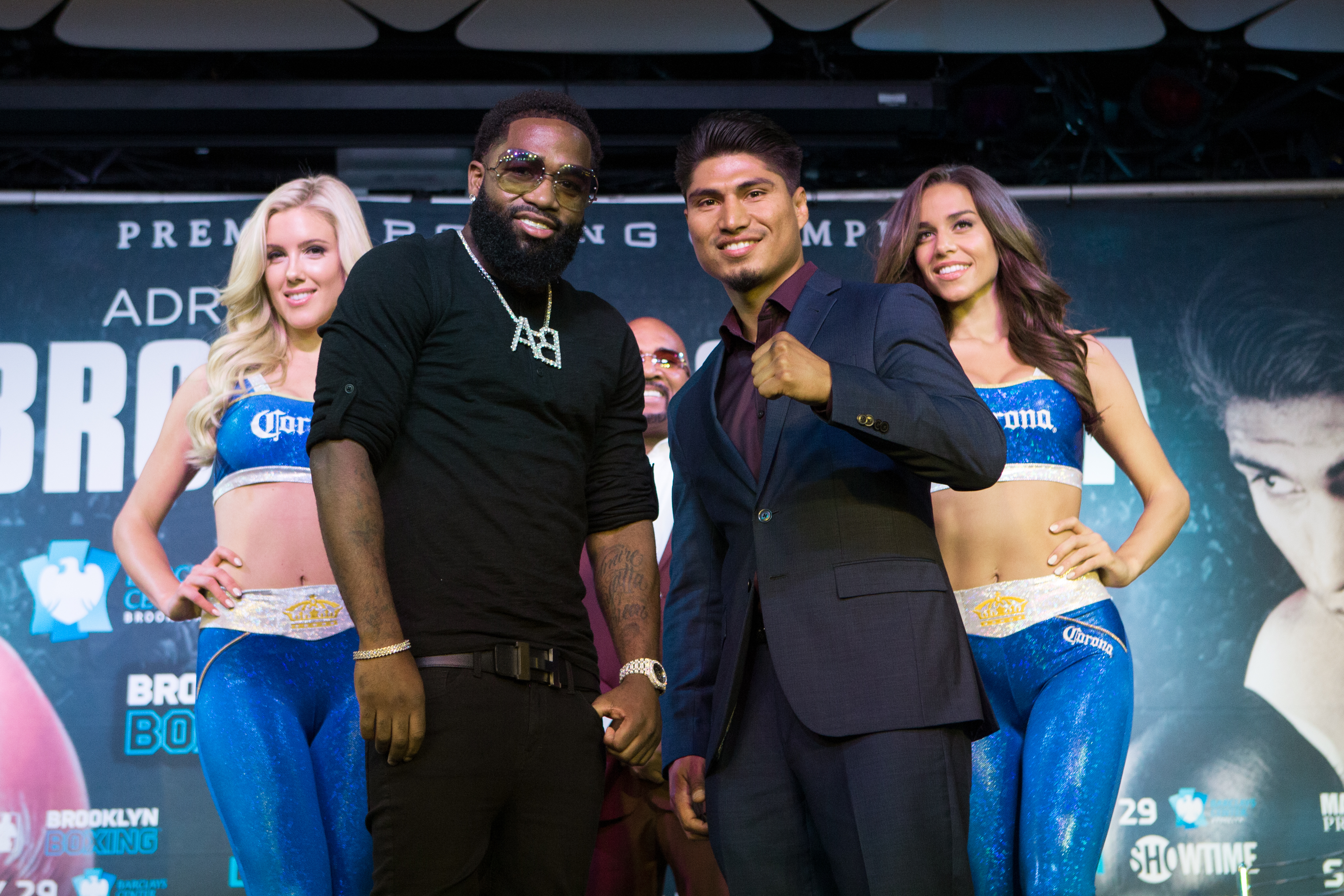 In a big fight, there are a few key factors to consider when trying to decipher who’s going to come out on top. Obviously, there are the strengths and weaknesses of the two fighters, how they’ve looked in recent bouts, their best wins to date, and a few other intangibles. There’s always that “anything could happen” atmosphere to live sports that makes us keep watching, but a finely tuned eye can still take a look at these factors and tell you who’s gonna win a good deal of the time. So with all that in mind, here’s the breakdown for this weekend’s biggest boxing match, a 140-pound super lightweight clash between Adrien Broner and Mikey Garcia.

Both men are gifted boxers. Garcia, as a member of a boxing family, has the sport practically in his DNA. Broner is blessed with quick hand speed and all-around athleticism.

Garcia seems to have the edge in punching power. He is the more technically refined of the two fighters as well. His pedigree helps him significantly in this regard, as he’s been raised learning the finer points of the sport.

Broner would have the edge in speed. He has fought at heavier weights than Garcia has prior to this fight, so he could conceivably have an all-around strength advantage as well. Garcia hasn’t previously faced an opponent with the quickness that Broner brings to the table, so it’ll be interesting to see how Garcia handles that.

Broner’s main weakness has been a tendency to hang back on the ropes and rely on his defense too much. He’s a very quick fighter with good reflexes, but he’s much better off when he’s on the attack. When he hangs back and waits to counter, it often results in him being outworked for long stretches or hit with big power shots that can sway the judges. He’s not gonna want to be taking clean power shots from Garcia. Broner will definitely want to correct this flaw in his game if he wants to come out on top.

Let’s look at the five most recent performances for each fighter.

Broner is coming off a tough decision win over Adrian Granados. He looked lethargic at times in the fight, and he was outworked for long stretches while Granados attacked, but Broner ultimately did enough to convince the judges he’d won the fight. Prior to that win, he notched technical knockouts of Ashley Theophane and Khabib Allakhverdiev, two solid fringe contender types who he was favored to beat. He fought Shawn Porter, a highly ranked welterweight, in June 2015, and was beaten via close decision. Porter was able to take advantage of the lulls in action from Broner to outwork him and win on all three scorecards in spite of an impressive showing and a 12th-round knockdown from Broner. Broner also won a lopsided unanimous decision over the powerful, but limited, John Molina.

Garcia comes into this fight having never looked sharper. He just won via emphatic knockout over the highly touted Dejan Zlaticanin in three rounds in his last fight, and he dominated every step of the way. He defeated Elio Rojas via technical knockout a year ago. That was his first fight back following a long spell of inactivity due to a contractual dispute with his promoter. His last fights prior to the layoff were solid victories at a lower weight class.

It’s debatable what you could call the best win to date for Garcia. It would have to be either his lopsided, technical-decision victory over Orlando Salido, or his most recent knockout win over the aforementioned Zlaticanin. Salido, a veteran of many great and memorable fights, is the only man to hold a professional victory over Vasyl Lomachenko. Zlaticanin was an unbeaten lightweight titleholder at the time and had looked excellent in his recent outings coming into the fight with Garcia. Garcia steamrolling of Zlaticanin was very impressive.

Broner never looked more spectacular than he did in taking apart Antonio Demarco to win the WBC lightweight championship. He was brutal and efficient in attacking Demarco relentlessly and battering him to defeat in eight one-sided rounds.

These are the little things that could make all the difference.

Broner has had a slew of recent run-ins with the law. He’s gotten into all sorts of trouble for various incidents over recent months and years, and he seemingly always has some sort of court appearance pending. Could this throw him off his focus? We’ll see. One thing he does have going for him, however, is his ability to take a punch and keep on coming — Broner has never been stopped.

Garcia has never faced a fighter with Broner’s quickness. It could certainly spell trouble in the opening rounds, and it could be possible that Broner will have a strength advantage, too. However, Garcia has always been big for the lighter weight classes and will be very healthy and ready to go at 140 pounds. Whether or not the weight will be an advantage or a disadvantage, it’s hard to say.

How will it play out? Well, they’ll start off tentatively, both wary of the incoming shots from their opponent and feeling each other out to see how powerful or quick their opponent is. Broner will get the better of it early. As the fight goes along and Garcia starts to adjust to Broner’s speed and begins to time him with his attacks and cut the ring off more, then he’ll begin to take control and start piling up points. Garcia will maintain the advantage throughout the fight once he takes over and either win a clear unanimous decision or possibly score a technical knockout in the later rounds. A few knockdowns for Garcia wouldn’t be a surprise, but my gut tells me it’s gonna go the distance.