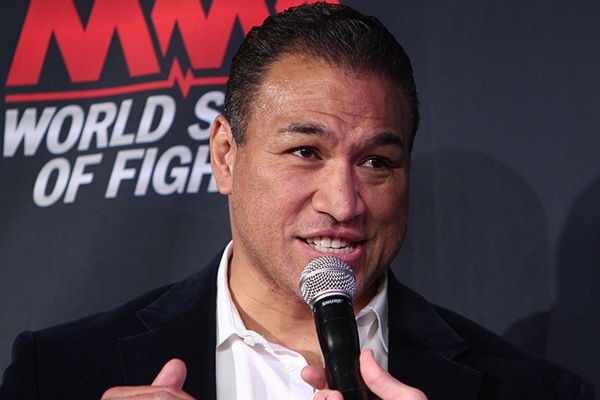 Something seemed to be vastly different for Travis Browne in his headlining contest with Derrick Lewis at UFC Fight Night 105. Browne looked like the fighter fans had pegged to be a future heavyweight champion only a few years prior. There was something different on the outside of the cage as well: the man providing instructions to Browne.

That man was former kickboxing star and World Series of Fighting President Ray Sefo. Browne paired up with Sefo while traveling to Las Vegas to train with Ricky Lundell.

“That was kept really quiet,” Sefo told Combat Press. “Nobody really knew about it until about two weeks out from the fight. Every now and then, Travis will come out to Vegas and we’ll move around a little bit. We’ve only done that two or three times. I got a phone call asking if I would meet up with him and chat. He was wanting me to be his striking coach. So, yeah, I met up with him, had lunch and talked about what he wanted to do and why he wanted to come down here.”

The two men worked together for a few weeks to create a game plan for countering the seemingly unstoppable force known as “The Black Beast.” Lewis was on a tear and was adding highlight-reel knockouts to his collection in each outing.

Browne utilized a strategic game plan from the opening bell. “Hapa” used his long reach to deliver devastating kicks to the body while also avoiding the power strikes of Lewis. Browne had Lewis in trouble on several occasions early on. However, as Browne looked to capitalize on his success, Lewis was able to catch him and swarm in for a TKO finish in the second round.

“The first round, [Browne] followed the game plan,” said Sefo. “You saw Derrick Lewis had no answers for that, because he hurt Derrick a few times in that first round.

“When I talked to Travis afterwards, he said he felt more confident in that second round. That’s the thing about heavyweights. He got caught. He tried to punch through it and got caught again.”

The loss was Browne’s third in a row, which normally would mean a UFC fighter should start getting in contact with other promotions for his next bout. However, the UFC’s heavyweight division doesn’t feature a lot of depth, so Browne will get another chance inside the Octagon.

Although his place on the UFC roster may be safe for at least one additional fight, Browne needs to avoid getting hung up on the loss. It’s always a crucial step for a fighter to find peace following a defeat. Many fighters have been unable to move on from losses, their careers forever marred by a single outing. Despite the recent downtrend in Browne’s career, Sefo is confident his new student will continue to move forward in his MMA career.

“He’s in a good place mentally,” Sefo said. “After the fight, his manager asked me, ‘Well, what do you think, coach?’ I told him that I don’t think Travis should fight again until he calls me saying, ‘I want to rip that guy’s fucking ear off.’ That’s the phone call I got from Travis, which is good. As a coach, it’s always good to hear a fighter say that.

Sefo definitely has his philosophy on making sure his fighters are ready to step back into action following a loss.

Although Browne didn’t leave the Octagon with his hand raised in victory, the fight was not a total waste for the former top contender. He looked like a new fighter against Lewis, finally bringing back the array of kicks he used often earlier in his career. He also appeared to be light on his feet, not content with using a wide and static stance. As the famous saying goes, you either win or you learn. In his last bout, Browne and the MMA world learned that he’s still capable of being one of the most dynamic fighters in the division.

“Duke [Roufus] and some other coaches spoke to me and said that was the best he’s looked in a long time,” Sefo said. “Combining his athletic ability with fighting skills was a key focus for this, and I think you saw that from him in that first round.”

While much of the MMA world will focus on the thunderous flurry of punches Lewis used to end the bout or Lewis’s post-fight interview, Sefo would remind his protégé to stay focused on the positives.

“He called me afterwards to go over the fight,” Sefo said. “I told him, ‘Listen, you went out there and showed what you’re capable of for those first five minutes where Derrick Lewis couldn’t touch you. OK, the outcome wasn’t what we planned for, but that five minutes of positivity, that’s what we’re going to stick to and enter the next fight with.’”

Sefo and Browne were only able to work together for roughly seven weeks before the Lewis fight. If Browne can make such an improvement in a short amount of time, Sefo and his power of positive thinking could lead to a second wind in the sails of Browne’s career as a top contender.