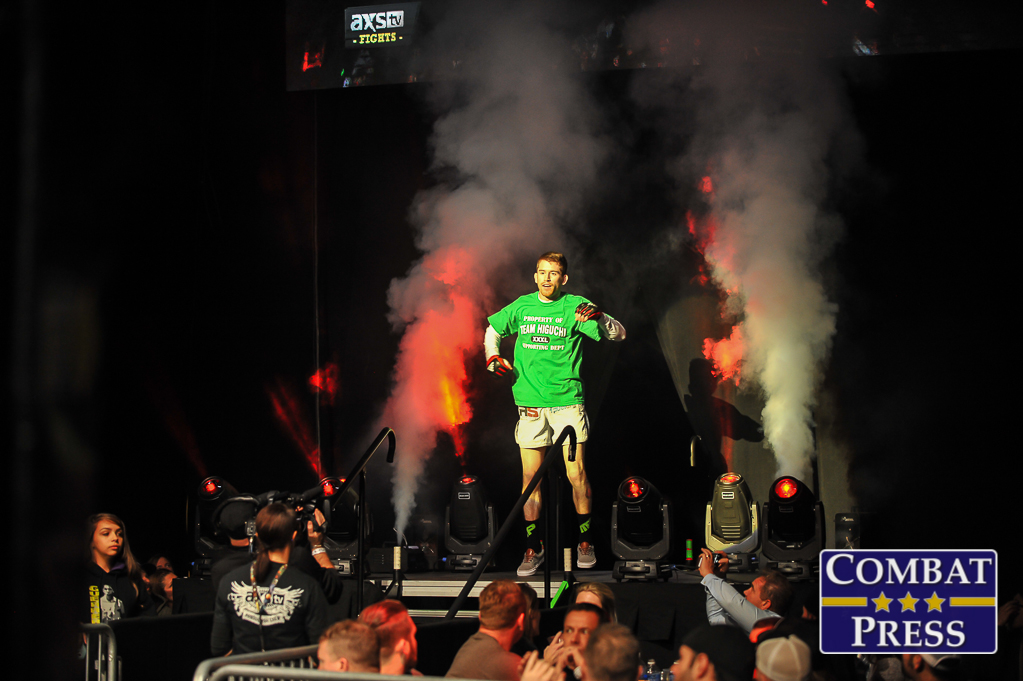 Legacy Fighting Alliance remains extremely busy with its nearly weekly offerings. It might be time to slow down, guys. The fifth event is again void of title fights, but that doesn’t mean it lacks intriguing fights. The headliner features Marcus Edwards and Adam Townsend, and undefeated prospect Ian Heinisch is also set to appear in action. However, our attention turns to the featherweight co-headliner between undefeated rising prospect Cory Sandhagen and 13-fight veteran Jamall Emmers.

Emmers entered the Resurrection Fighting Alliance cage for the first time after a strong run across numerous promotions, including the Tachi Palace Fights organization and Legacy Fighting Championship. Emmers, a natural featherweight, stumbled in his RFA debut, a lightweight title fight against Thiago Moisés. He bounced back upon returning to 145 pounds and fighting Rivaldo Junior at RFA 41. Emmers made his pro debut in 2012 and went 1-1 through his first two fights before finding his groove and piling up six straight wins. During his streak, Emmers topped Ernest De La Cruz at Legacy FC 17 and took victories at three Best of the Best events to maintain a grasp on the promotion’s featherweight crown. His second career loss came against veteran Rey Trujillo at the fourth Best of the Best show. Trujillo, a Legacy and Strikeforce vet, submitted Emmers in the second round. The 26-year-old then moved to Tachi Palace Fights, where he picked up two victories before joining the RFA. The Pinnacle MMA product has three finishes via strikes and two submission victories.

Sandhagen has already earned the praise of former UFC champ T.J. Dillashaw, for whom the undefeated youngster served as a primary sparring partner. The Elevation Fight Team member is a strong kickboxer who scored several quick knockout finishes as an amateur. He has yet to flash knockout power as a pro, though. Instead, he quickly submitted Bruce Sessman in his May 2015 debut. His RFA debut in early 2016 ended in a unanimous nod for the Colorado-based fighter. He added another submission before defeating veteran Josh Huber for the Sparta Combat League featherweight crown. He jumped back to the RFA for his most recent fight and notched a decision win over fellow prospect Clay Wimer.

The eye-opener on Sandhagen’s resume is his victory over Huber. Huber is a veteran who has competed for the likes of the World Series of Fighting and Titan FC. Sandhagen appears to be the real deal, and Emmers is the type of opponent who can give him a test on the feet. However, Emmers has stumbled several times and seems like the perfect opponent for the rising Sandhagen.

Neither man is a significant finisher, so this fight is probably going the distance. Sandhagen should preserve his unblemished record against a tough veteran test.

In November 2015, at Deep Jewels 10, Naho Sugiyama and Mina Kurobe clashed in an atomweight headliner. Sugiyama emerged with the unanimous decision. Now, more than a year later, it’s time for the rematch. This time, there’s gold on the line. Sugiyama will put her Deep Jewels atomweight belt up against Kurobe in the Deep Jewels 15 headliner.

Sugiyama captured the Jewels featherweight (105-pound) title in 2011, but she never successfully defended the title. Her next two fights for Jewels were non-title affairs, with a failed Invicta FC atomweight title bid against Jessica Penne sandwiched between them. When she finally did put her Jewels title on the line, she was defeated by Seo Hee Ham. Sugiyama rebounded with wins at Deep Jewels 2 and 3, but fell via strikes against established former champion Ayaka Hamasaki in August 2014. “Sugi Rock” remained on the shelf for more than a year before returning and defeating Kurobe at Deep Jewels 10. This set up a title affair at Deep Jewels 12 in which Sugiyama beat Emi Tomimatsu by unanimous decision to claim the vacant championship. The Wajutsu Keishukai AKZA has just two submission wins and one technical knockout. Her remaining victories came on the scorecards. The 39-year-old had no combat-sports background before training in MMA.

The 39-year-old Kurobe got a late start to her professional MMA career. The Master Japan product, who has a background in grappling, debuted in December 2012 at the age of 35. She won her first five fights, including three by way of rear-naked choke submissions. Her victories, however, came primarily against opponents who currently sit right around the .500 mark. When she stepped up to face Mei Yamaguchi, Kurobe fell on the scorecards. Her next fight, which came against Sugiyama, also ended in disappointment when the scorecards were read. Kurobe regained her confidence with wins over MMA newcomers Hana and Renju Date, who had a combined 1-0 mark when they clashed with Kurobe. The Deep Jewels mainstay then stepped it up and scored significant wins over veterans Tomo Maesawa and Saori Ishioka.

Sugiyama has struggled to find success against the best competition she has encountered. Her most recent two-fight winning streak, which includes victories over Kurobe and Tomimatsu, is probably her best showing. Prior to her first pro loss, the 39-year-old fighter had defeated a handful of top ladies, but her three-fight skid included losses to Penne, Ham and sub-.500 fighter Celine Haga, who later found new life at atomweight. Kurobe, meanwhile, is just starting to find success against opponents who have records above the .500 mark. Her first attempts against Yamaguchi and Sugiyama came up short, but she showed improvement with the wins over Maesawa and Ishioka.

Sugiyama might not be among the division’s true elite, but she proved to be a handful for Kurobe in their first meeting. It was a back-and-forth affair, but “Sugi Rock” took the edge in the striking and clinch. This will be another tough, grinding affair fought mostly on the feet — neither lady had any success with takedowns in their first fight — but Sugiyama should once again be capable of gaining the upper hand and doing what she does best. “Sugi Rock” will claim the judges’ nod in a hard-fought contest.

Grachan and Brave Fight hardly ever grace this column, but the combined promotion does house one serious flyweight prospect. That man is Hayato Suzuki, who is undefeated through 17 outings. The 30-year-old returns to action at Grachan’s 28th offering, where he’ll scrap with 12-fight veteran Isamu Odagiri. The event won’t steam live, but Grachan will consider rectifying this situation in the future if the promotion can gain at least 1,000 followers on its YouTube channel.

Suzuki bounced around between the Deep, Brave and Grachan promotions for the first 10 fights of his pro career, which launched in 2012. Then, he appeared on Vale Tudo Japan’s sixth offering, where he edged Ryuya Fukuda on the scorecards. He returned primarily to the Grachan and Brave Fight promotions after defeating Fukuda. He has now extended his record to an impressive 15-0-2, but most of his opponents have hovered around the .500 mark in their careers. The 30-year-old has six submission victories and five finishes via strikes. On the mat, Suzuki is fond of hunting for rear-naked chokes, a hold he has used successfully in all six of his submission victories.

The 28-year-old Odagiri isn’t exactly a head-turner, but his 7-4-1 mark puts him among the upper echelon of Suzuki’s opponents. The Wajutsu Keishukai Tokyo export debuted under the Pancrase banner with a loss in 2010. After a win with Pancrase in his sophomore outing, Odagiri moved to Deep and went on a 5-0-1 run. In 2015, he hit a rough patch. He has gone just 1-3 since then, and two of his losses came against sub-.500 fighters. He only has one submission victory and one technical knockout.

This fight would seem to give Suzuki another step up in competition that he needs if he wants to prove he can be successful at the higher levels of the game, but Odagiri’s record is somewhat deceptive. Odagiri might be above the .500 mark, but his recent losses suggest that he’s a grinder who can’t get the job done even against lower levels of competition.

Suzuki, who fights out of the Brave gym, can be a dominant force in top position, where he’ll work a ground-and-pound attack while looking for openings to sink in his favored rear-naked choke. He’s facing an opponent who has succumbed to a submission and has dropped three additional bouts on the scorecard. Suzuki would appear to be far superior to Odagiri in every aspect of MMA. This should be another easy win for the rising flyweight fighter.