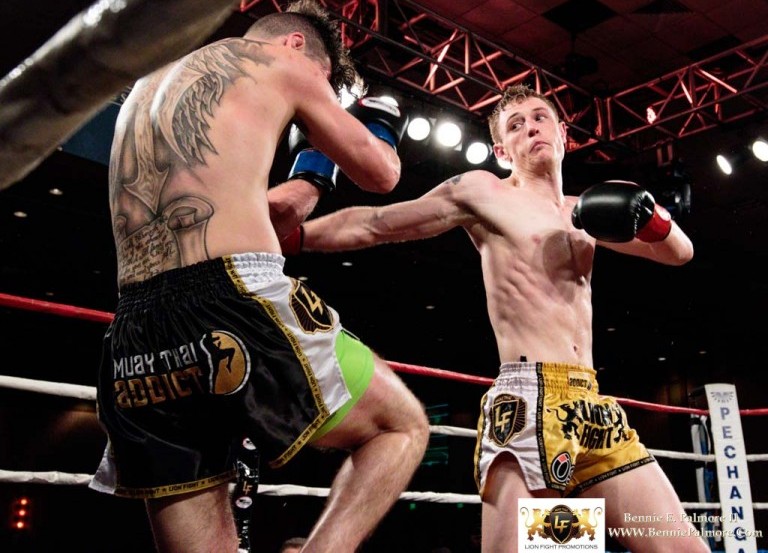 What happens when a guy wakes up one morning and decides he needs to lose some pounds? Some of the most common self-talk includes, “I’m going to run every day,” or, “I’m going to eat healthy from now on.” The problem is that there is no longevity in these vague and lofty goals. The more successful approach is to find something he’s good at, and to stick to it.

Destiny led Travis Clay in the direction of the perfect weight-loss program. It just took a decade to realize it.

“Originally, I got interested in Muay Thai when I was very young — I was nine or 10 years old,” Clay told Combat Press. “I had a next-door neighbor, and their family traveled a lot. They went to Thailand on vacation and brought back some books. One of them was on the history of Muay Thai, and that interested me a lot. It kind of sparked my interest there. I didn’t actually pick up the martial art until many years later.

“I was 25 years old, overweight, and was looking for a place to train. I was over 225 pounds. A guy that I worked with told me about Sitan Gym, and that’s where I’ve been ever since.”

Sitan Gym in Chandler, Ariz., has been in business for over 30 years, and Thiago Azeredo is the head coach. Under Azeredo’s tutelage, Clay went from an overweight guy to a 130-pound wrecking machine. With over 20 fights and double-digit amateur titles, he steadily made his mark in the sport. In 2016, Clay had his first pro fight and Lion Fight debut at Lion Fight 27 in January.

“I really enjoyed the fight,” the Arizona native said. “My last fight was against Jared Papazian. He’s a UFC vet, he has lots of fights, and he was trying to make the transition over to Muay Thai. It was a really good fight. It went all five rounds to decision. I felt like I dominated the fight, most of the rounds, but he’s a tough guy.

“I was a little gun-shy in the first and second round. Being my first fight as a pro, I had a little bit of nerves going on, more so than normal.”

In his pro Muay Thai debut, Clay came out victorious against the seasoned MMA fighter, and that has led to a big step up in competition going into his next fight, which takes place on the main card of Lion Fight 29 tonight on AXS TV.

East-Coaster Julio Pena is 4-0 as a pro, has a couple consecutive knockouts, and is also in his 30s. Even with a combined record of only 5-0 as pros, these two fighters should provide fans with a very exciting fight.

“My opponent is tough, man,” Clay admitted. “He’s undefeated, and he doesn’t stop. You can hit him with lots of hard shots and he keeps coming. He’s one of those guys that has a heart that takes up most of his chest. He’s going to fight until the end. It’s going to go all five rounds, I think.”

The match-up between Clay and Pena has “Fight of the Night” written all over it. Regardless of who wins the actual bout, any fan of kickboxing will come out a winner after these two collide tonight at Lion Fight 29. After that, it’s back to training and home life for Clay.

“Training and teaching is my full-time job right now,” Clay explained. “Other than that, I’m a family man. I stay at home with my wife and kid. I’ve been married for 12 years. My son is seven years old. My wife is a CPA. She works for a tax firm, filing returns and stuff like that.”

Muay Thai was originally a way for Clay to lose weight and get in shape. Less than a decade later, he now holds multiple amateur titles and is on track to make big waves in one of the biggest promotions in the sport. Tune in to AXS TV tonight to get a firsthand look at how much potential this guy has going into his second pro fight.

“Fans are going to get to see me open up a little more and show up with a higher pace.”

Clay would like to thank all of his coaches and training partners at Sitan Gym and Plant Powered Warrior.
Advertisement