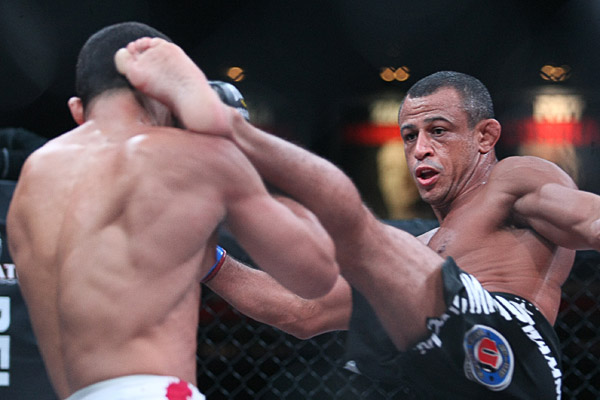 The heavyweight division doesn’t produce quite as many high-level prospects as many of the other weight classes, so when a potential up-and-comer emerges, it’s time to take notice. CES MMA’s 33rd offering includes at least one heavyweight whose record suggests that he could eventually be bound for the UFC’s Octagon. That prospect is Chaz Morgan, who has suffered just one loss in 11 pro bouts. Morgan’s latest test comes in the form of Juliano Coutinho.

Morgan is a Louisiana native who, like numerous other fighters, came to the sport of MMA after his football career came to an end due to injury. The 35-year-old picked up three wins via strikes as an amateur before making his pro debut in 2011. He won his first nine professional contests, earning stoppages via strikes in seven of the outings and going the distance in the remaining two, but his most notable opponent in that span was veteran sub-.500 journeyman Jonathan Ivey. “White Death” finally came up short in his 10th fight when he made a failed bid at the Island Fights heavyweight title. The champion, Alex Nicholson, finished Morgan by way of TKO in the first stanza. The American Top Team fighter, who also trains with Alan Belcher, rebounded from the loss and claimed a decision victory over Dakota Merritt in a November bout under the Island Fights banner. In addition to his MMA career, Morgan has also claimed honors in NAGA grappling tournament action.

Coutinho is a 37-year-old Brazilian fighting out of Massachusetts. “Banana” lost his 2009 pro debut to Pat Bennett and didn’t return for his sophomore outing until 2012. The Cape Cod Fighting Alliance product found much more success upon his return. Among his six straight victories, Coutinho stopped UFC veteran Josh Hendricks with punches and scored first-round stoppages of Bellator veterans Randy Smith and John Orr. He earned his Brazilian Jiu-Jitsu black belt under Daniel Gracie. The 2008 no-gi Pan-American Jiu-Jitsu champ has worked on his striking with Sityodtong Boston and CCFA. He has two wins via strikes and two victories by way of submission, but both of his losses have come by way of some form of knockout. Coutinho was destroyed in his highest-profile bout, a 2015 meeting with Steve Mocco at World Series of Fighting 20.

Despite his struggles, Coutinho easily represents Morgan’s toughest test to date. He’s a high-level grappler with improving striking and the ability to finish opponents on the feet or the ground. What Coutinho seems to lack is a solid chin. The aforementioned Bennett finished him in 60 seconds and Mocco, a notably better fighter, ran through Coutinho in just over four minutes. Morgan, however, has struggled to maintain a consistent trend of finishes. Morgan is quite effective with his fists, but the aforementioned Ivey and Nicholson, as well as Demoreo Dennis, have all pushed the prospect to go the full distance.

Coutinho’s lack of success against Mocco could be a hole Morgan also exploits. The former Tulane football player has the quick early surge, and this could be Coutinho’s undoing. While it’s not a great sample size, Coutinho’s previous woes are a concern when he steps in again someone like Morgan. Morgan will either get the early TKO or hang on for the close decision nod.

The mismatch of the week might belong to Road FC and the headliner for its 29th event. Mu Gyeom Choi, whose record hovers just a couple of wins above the .500 mark, holds the league’s featherweight title. Bellator and Sengoku veteran Marlon Sandro is here to change that.

The 26-year-old Choi seems like an unlikely champion, especially given his 6-4 career mark. The MMA Story fighter debuted under the Spirit MC banner in 2008 and claimed a victory. His sophomore appearance didn’t come until 2011, but Choi once again had his hand raised. Then things took a turn for the worst. Choi dropped a decision in his Road debut and then suffered a knockout at the hands of JJ Ambrose. He rebounded with three straight Road FC wins, including a split decision nod over Bae Yong Kwon to claim the title and a split verdict over Doo Won Seo in his first and only title defense. Choi lost his most recent fight, a non-title contest. The champ is a protege of Jung Hwan Cha, who recently captured Road FC’s middleweight belt with a second-round TKO of UFC veteran Riki Fukuda.

Sandro is a Brazilian Jiu-Jitsu black belt fighting out of the Nova União camp. The 39-year-old started his pro career in 2004 and claimed a Pancrase championship before moving on to Sengoku, where he finished his first two opponents before running into Michihiro Omigawa, who handed Sandro, a 14-0 prospect at the time, the first loss of the Brazilian’s career. Sandro won his next two fights and then mounted a successful challenge for Sengoku’s featherweight title with a 38-second knockout finish of Masanori Kanehara. The Brazilian lost the belt to Hatsu Hioki in his first attempt at a title defense. Sandro next moved to Bellator, where he twice advanced to the featherweight tournament finals before being eliminated by eventual titleholders Pat Curran and Daniel Straus. Overall, he amassed an 8-3 mark inside the Bellator cage. More recently, Sandro has made a habit of visiting several different promotions. He made an appearance on Pancrase’s 20th anniversary card, fought for Bellator and made additional stops in Pancrase, Road FC and Shooto Brazil.

Sandro has an effective ground game, of course, but he’s a very dangerous striker as well. He has four finishes that came in under a minute, including three knockouts that checked in under 30 seconds. Choi, meanwhile, has suffered one loss via strikes and has a strong tendency to go the distance.

The only factors that keep this from being an absolute declared victory for Sandro are the Brazilian’s age and Choi’s ability to out-perform his underdog label. Sandro should win this fight by whatever method he chooses, but Choi could turn it into a grinding affair that ends in a decision. Yet, the obvious prediction here is a quick knockout finish for Sandro.

It may be the most obscure of the promotions covered in this week’s edition of Out of Obscurity, but Akhmat Fight Show has been putting together some noteworthy cards that bring together prospects from the region and veterans of the UFC and Bellator. The Russian organization’s 15th offering has a healthy dose from both categories across a set of tournaments spanning from the flyweight division up to the lightweight ranks. Names like Des Green, Kurt Holobaugh, Jonathan Brookins, Luis Nogueira and Shamil Zavurov might draw the most recognition, but this card’s most intriguing bouts contain flyweights. The showdown between undefeateds Chris Miah and Jarred Brooks is one to watch, but the center of flyweight attention is the 10-0 Magomed Bibulatov, who clashes with Irmeson Oliveira this weekend.

If Bibulatov’s name sounds familiar, it probably has something to do with his status as the World Series of Fighting flyweight champion. The “Gladiator” claimed the WSOF crown in October when he went five rounds with fellow prospect Donavon Frelow in a winning effort. The 27-year-old debuted in 2013 and has already tallied wins over notables Taylor Lapilus, Olivier Pastor and Eduardo Felipe. His victory over Felipe came at the inaugural Akhmat show. The champ was actually scheduled to meet Tyson Nam at WSOF 29 this weekend, but now he’s fighting on the other side of the globe instead. He has a background in sambo and wrestling, and he used a combination of wrestling and unorthodox striking to edge Frelow on the scorecards.

The 28-year-old Oliveira has yet to touch down on American shores, but he also holds victories over established veterans. The Brazilian, who trains at the Evolução Thai camp, has defeated Bruno Dias, Paulo de Sousa, Joriedson de Souza and Michael William Costa. After debuting in 2008 and going 1-2 through his first three bouts, Oliveira put together a 10-fight winning streak. He made his first trip to Russia to compete in an Absolute Championship Berkut tournament, but he suffered a split decision loss to Ruslan Abiltarov. Now, he returns in another tournament, this time opposite Bibulatov in a bracket that also features the aforementioned Miah and Brooks, as well as Anthony Leone, Shamil Magomedov, Yunus Evloev and Samir Faiddine. Oliveira has five submission wins and just one victory by way of strikes.

Oliveira is a champion under the Iron FC and Golden Fighters promotions, but he isn’t quite the super prospect that Bibulatov has turned into. The Chechen fighter is a strong competitor in all facets of the game, whereas Oliveira is really only dangerous on the mat. Against Frelow, Bibulatov was able to utilize his wrestling and strikes in combination to take the verdict. He’ll venture into similar territory against Oliveira, though it’s likely that he’ll be more dominant on the feet than he was against Frelow.

While the WSOF is busy with its 29th event, the promotion’s flyweight champion will be busy bolstering his own reputation. The Chechen fighter could turn in a one-sided drubbing against Oliveira while the Brazilian commits too deeply to submission attempts and working from his back. Bibulatov should be considered the early favorite to win the entire tournament. Three men may have entered the bracket without losses, but only Bibulatov will emerge from this competition with his zero intact.