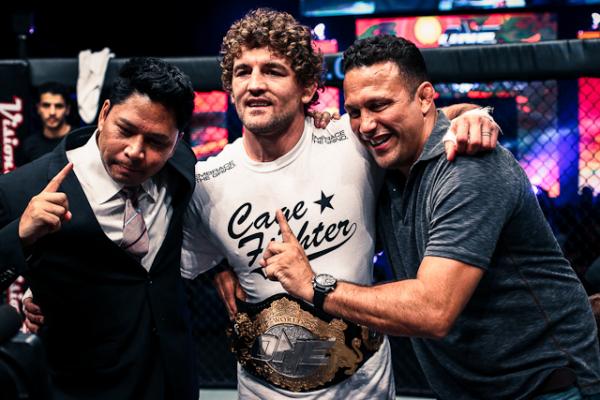 There are still a decent number of fight fans that consider Ben Askren to be the best welterweight in the world. A former Bellator champion with an undefeated 14-0 record and nothing really even resembling a blemish on his resume, Askren is more than likely the most talented fighter not under UFC contract. He’s without a doubt the best fighter in the world not signed to one of the big three MMA organizations based out of North America, and he’s far and away the biggest attraction his current company, ONE Championship, has to offer. But since Askren signed with the Asian promotion in late 2013, it’s starting to look more and more like “Funky” is going to need a change of scenery if he’s ever going to live up to the high expectations that fans have held for him since the day he decided to get into the MMA game.

Despite the fact that Askren has been vocal in his support of ONE since the moment he signed his deal in December 2013, “Funky’s” time in Asia’s largest MMA promotion has always felt like it was supposed to be a pit stop before the former collegiate wrestling champion moved on to bigger and better things. After being released by Bellator and getting rejected by the UFC more for political reasons than fighting ability, Askren was clearly set to outclass the ONE roster of welterweights from the moment he joined the organization, and that’s exactly what Askren started to do when he took his first couple of fights for the promotion last year.

“Funky” made quick work of his first two ONE opponents, taking out Bakhtiyar Abbasov and Nobutatsu Suzuki both inside the first round and looking every bit as dominant as he was expected to look in the process. Then the wheels fell off a bit. Askren’s third fight, a match-up against Brazilian Luis “Sapo” Santos, was called a no-contest when an accidental eye poke from Askren forced the fight to be stopped just over two minutes into the April bout. The rematch, which was supposed to take place last weekend, was also called off after Santos missed weight the day before the bout and was unable to hit a 190-pound limit set by Askren on the day of the fight. Suddenly it’s been over a year since Askren has earned a victory.

Askren’s two-year contract with ONE that we thought would be a small blip in his career has turned into a trip to MMA purgatory, one that he needs to get out of quickly.

To be fair, the blame for Askren not fighting last weekend falls squarely on the shoulders of Santos. ONE and Askren both gave Sapo an opportunity to show up and fight (twice) and he wasn’t able to get it done. But after two years in ONE, Askren has only fought a total of three times and has seen his popularity slowly diminish with each day that he’s been away from the crowded North American MMA scene. Askren has said he’s committed to ONE and has enough fights left on his contract that he may be there for the foreseeable future, but in the two years he’s been fighting for the organization, ONE has pretty much proven that it can’t supply a fighter of Askren’s caliber with the type of opponent he needs to become truly successful in this sport. Sure, there’s a lot of bad blood between the former Missouri Tiger and Santos, but is anyone really pining for that rematch to the point where ONE books it for the third time? And if the organization doesn’t book the rematch, who can it throw at Askren to get fans excited? If Askren is ever going to get his due as a top-tier welterweight, he needs to start looking elsewhere for employment.

The first and most obvious option for Askren should be the UFC. While Askren and UFC President Dana White have a volatile relationship of sorts, White has proven time and time again that he’s more than willing to live and let die if he sees the opportunity to make some money. The UFC signing Askren may not be a blockbuster move that sends headlines around the sports world, but it would be a major headline in the MMA world and the biggest signing the promotion has made since acquiring former WWE superstar CM Punk last winter. Furthermore, it would finally give Askren the chance to prove what he and his fans have believed for years: that he’s the top 170-pound fighter in the world.

However, whether it’s due to Askren and White’s hostile relationship or just because the UFC didn’t seem to think it was necessary to sign “Funky” the last time he was a free agent, it feels like Askren going to the UFC is still a pipe dream. As excited as fans would be to see Askren looking to use his wrestling game to shut down talented strikers like Robbie Lawler or going toe-to-toe on the mat with fellow NCAA stars like Johny Hendricks, there seems to be a mutual disinterest between the two sides. Unless something drastic happens between now and the next time Askren becomes available, that’s unlikely to change.

Even with the UFC more than likely out of the picture, Askren should still be looking to move on from ONE. No disrespect to the World Series of Fighting, which would be his other option at this point, but his best landing spot is probably his former home in Bellator MMA.

The Bjorn Rebney regime that sent Askren packing in 2013 is long gone, and the new head of Bellator, Scott Coker, has done a pretty admirable job of setting the promotion up for success in the short amount of time he’s been in charge. Coker has stacked important cards to the point where on a good day Bellator is able to compete with the UFC. He’s signed a decent number of notable UFC castoffs in order to gain some star power and he’s proven he’s willing to make any fight in any scenario if he thinks it will help draw eyes to his product. Those improvements have made Bellator the go-to spot for free agents unhappy with the UFC at the moment, and they bode well for Askren’s future if he were to decide to head back to Bellator in the near future.

Askren’s reputation as a “boring” fighter has hindered him in the past and was a primary reason he was let go by Bellator the first time. Despite his immense talent and undefeated record, Askren isn’t exactly considered a draw. With a roster full of relative up-and-comers at the time, Bellator didn’t feel comfortable headlining multiple events a year with a fighter that didn’t have a fan-friendly style. That’s not going to matter anymore if Askren signs with Coker. With guys like Tito Ortiz, Kimbo Slice and even Ken Shamrock competing for the promotion, Askren could take a few fights outside of the main event and still have a ton of eyes on him due to the other big names on the card.

Adding to the fun of an Askren-Bellator reunion is the number of big-time signees the promotion has added since “Funky” headed across the Pacific. The standout match-ups for Askren would obviously be former UFC title challenger Josh Koscheck and Koscheck’s heavy-hitting rival Paul Daley, but there are a few dark-horse options with even more intrigue. Rising star Michael Page is 9-0 and has one-shot knockout ability so devastating that even someone like Askren would need to be extremely careful in the opening moments of each round. And perhaps best of all, there is current champion Andrey Koreshkov, who holds an 18-1 record with the only defeat coming due to an Askren knockout in “Funky’s” final Bellator bout.

As admirable as it was for Askren to take the deal with ONE and try to carve out a path of his own a couple of years ago, this is a sport where popularity and dominance go hand in hand with making money. It’s become clear that if Askren’s going to make the most of his career, he needs to start looking toward a future outside of Asia. Maybe it’s the UFC. Maybe it’s the WSOF. More than likely it’ll be a return to Bellator. Regardless, Askren needs to get back to fighting quality competition and he needs to do it soon. There are only a handful of welterweights on the planet with the amount of talent Askren possesses, but all of that talent is going to go to waste unless Askren starts fighting those guys and proving exactly how good he is.