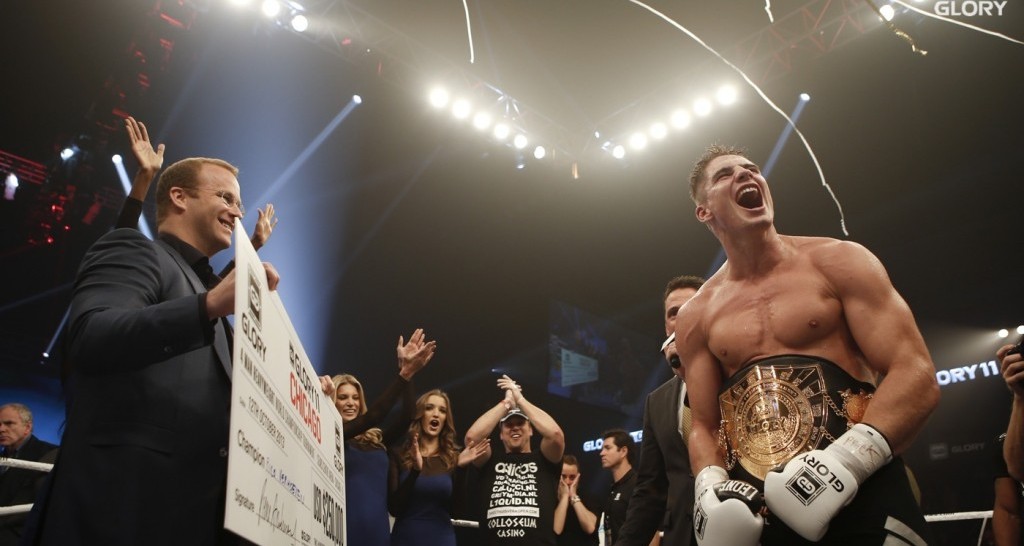 The first GLORY event of 2015 took place from the Hampton Coliseum in Hampton, Va., on Friday, Feb. 6.

The event was headlined by a heavyweight title tilt between current champion Rico Verhoeven and power-punching veteran Errol Zimmerman. The bout marked the third meeting between the two. “The Bonecrusher” knocked out Verhoeven in under a minute in 2012 under the It’s Showtime banner, and Verhoeven exacted revenge at GLORY 9 in 2013 via decision.

Verhoeven was making the first defense of his GLORY belt. He captured the title in June with a decision win over Daniel Ghita. The victory over Ghita moved the 25-year-old’s record in the GLORY ring to an impressive 7-1, including wins over Peter Aerts and Gokhan Saki.

Zimmerman, meanwhile, looked to put gold around his waist after winning the GLORY 16 contender’s tournament in Denver last May. On that night, the Curaçaoan fighter scored back-to-back first-round stoppages over Ben Edwards and Anderson “Braddock” Silva. The 28-year-old had won three of his last four outings.

Heavyweight champion Rico Verhoeven retained his heavyweight title after challenger Errol Zimmerman injured his knee in the second round. Zimmerman landed a heavy shot early, but Verhoeven fired back and wobbled Zimmerman. Verhoeven was surprisingly aggressive and repeatedly landed with punches and kicks. A wild exchange appeared to be a knockdown for the champion, but it was surprisingly ruled a slip by the referee. The action continued in the second stanza as Verhoeven scored from range. Zimmerman attempted a spinning back kick, but in the process, injured his right knee. He fell to the canvas in pain and after a brief evaluation from the doctor, the fight was waived off.

The finals of the welterweight tournament were a one-sided affair as Nieky Holzken dominated Raymond Daniels, earning a third-round TKO. Holzken closed the distance early to prevent Daniels from opening up with kicks. Holzken pinned Daniels in the corner and dropped him with a hook to the liver. In round two, Holzken dropped Daniels twice, including a violent combination that ended with a flying knee. Daniels showed heart, making it to the third round and dropping Holzken with a spinning back kick. Holzken was unfazed, putting Daniels in the corner for a final time and ending the fight with a massive overhand right.

Middleweight Joe Schilling put on a show in his fight with Canadian Robert Thomas, cruising to a lopsided decision win. Schilling was aggressive throughout, battering his younger foe with right hands. Thomas never got started and his lack of head movement left him a sitting duck for the punches and front kicks of Schilling. In round three, a massive right hand from Schilling sent Thomas to the canvas, but he was able to survive to the final bell. There was no doubt on the scorecards, as all three judges rewarded Schilling for his efforts.

In a match-up of the U.S. Air Force’s Cedric Smith and the U.S. Navy’s James Hurley, it was Smith that scored a second-round stoppage. Smith battered Hurley from the opening bell, scoring with knees and punches. He scored with a violent head kick in round two that saw Hurley shoot for a takedown. Moments latter, a final combination from Smith saw the referee intervene and save Hurley from further punishment.

The second half of the welterweight tournament ladder saw Nieky Holzken return to the GLORY ring after more than a year away and earn a unanimous decision win over Alexander Stetcurenko. Holzken’s crisp combinations and strong defense were the story of the fight. Stetcurenko’s face was pink after the opening frame, but the Russian was able to score with his left uppercut. Holzken mixed in kicks and knees throughout, which proved to be the difference on the scorecards.

In the first welterweight tournament bout, decorated karateka Raymond Daniels used a variety of spinning attacks to best Brazilian Jonatan Oliveira and move onto the finals. Daniels scored a knockdown in round one with a wheel kick, after peppering Oliveira with heel kicks to the body to set it up. It was more of the same in round two as Oliveira’s forward pressure proved to be his downfall. Daniels dropped him on two more occasions, earning the second-round TKO.