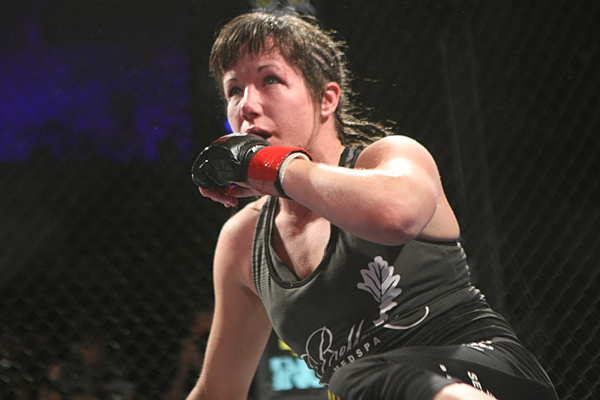 TUF 20’s Angela Magana and the Perils of Self-Promotion

Remember that word? I guess it was a term that peaked in the ’90s. Essentially, it was reserved for those who acted like something they are not. Somebody rocking the skater clothes who couldn’t even ollie (that was, and still is, me), or someone who would spew so much venom from the mouth that they could no longer be taken seriously. The latter is very apparent with one fighter during this season of The Ultimate Fighter, but it ended up being somebody unexpected.

After the first few weeks of The Ultimate Fighter 20, Felice Herrig looked like the runaway favorite to be the head case of the season. She turned out to be anything but and actually represented herself in a positive way. Instead, Angela Magana takes the Ms. Crazy Eye award.

Magana, who hasn’t won a fight since 2011, has really taken the Jason “Mayhem” Miller path to popularity. Or, at least she’s trying to. This is what happens when success isn’t flowing through the veins in the way one would hope. Eventually people get desperate, and yes, they become a bit of a poser.

The 31-year-old Magana, who on Twitter refers to herself as “Your Majesty” and her followers as “Peasants,” tweets great things such as, “Forcing a smile to make my loser followers think I give a shit about dem [sic].” The rest of her timeline is filled with her dissing people and, of course, the nude photos she takes of herself when she is really feeling like a legend in her own mind.

That’s just a very small example of the kind of stuff you’ll see on her Twitter feed. Magana pretty much represents what you are not supposed to do if you want to have a career in an organization such as the UFC. She’s not somebody most are familiar with, and the way she carries herself in social media will only give her a shorter leash with the promotion, especially if she loses her first fight in the Octagon against Tecia Torres on Dec. 12.

Magana no doubt is trying to mimic, in a way, the way Ronda Rousey rose to stardom in the MMA world. But it’s coming across as more of a gimmick. Rousey was a trash talker who was able to back up her talk with success each time she fought. In social media, she was all about being accessible to her fans and would communicate with them in a positive way. Magana is everything that’s wrong with a professional athlete, or at least that’s how she portrays herself.

Is this who Magana really is? I don’t know, but she definitely comes off as a poser to the average fan. And it’s the average fan that she should be appealing to. According to Magana, she’s been through a lot—a tough upbringing, serious injuries and an overall bad deck of cards that she’s had to deal with. Everything she’s gone through, coupled with the way she speaks towards others, doesn’t add up with her current behavior. Most are thankful for opportunities, but she doesn’t appear to be.

Unfortunately, Magana doesn’t have the talent needed to overcome her negativity towards the general public. Maybe there’s a grander plan for her that we don’t see. Maybe she has something else lined up for her once her fight career is over. Or maybe the joke is on us and this whole attention grab she is pursuing will work out one day. It’s doubtful, though, as this behavior is really more of a red flag than anything else. Rarely have we seen anybody proceed with such irresponsibility and then become a success story.

If there’s one thing that Magana likes, it’s negative attention. However, the more she says it doesn’t bother her, the more it probably does. It’s still not too late for her to become somebody worth pulling for in the UFC. But first she must find some success and treat those around her with some sort of dignity. Her current efforts to bring attention to herself are an embarrassment, and it hardly embodies the spirit of the UFC.