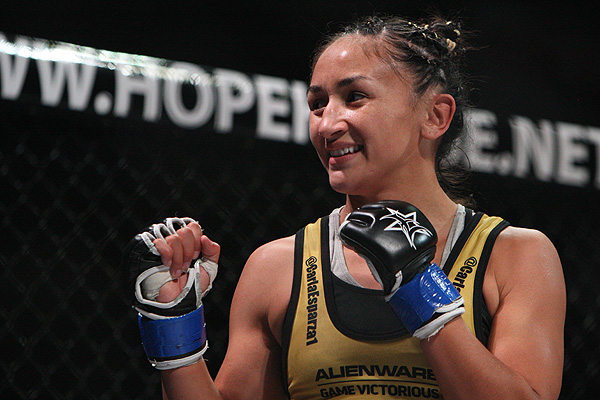 Carla Esparza proved why she was the No. 1 seed on TUF 20, dominating Rose Namajunas to claim the inaugural strawweight title. Esparza was able to land a few takedowns in the first round, but Namajunas was able to quickly get back to her feet each time. The two traded shots on the feet with Namajunas using more spinning kicks and backfists. Esparza opted to stick and move. Namajunas continued to push the pace throughout the first round, being aggressive and backing Esparza against the cage. Esparza landed her most effective takedown in the second round where she landed some heavy ground-and-pound before she stood back up to avoid a submission attempt from Namajunas. Namajunas went for a takedown of her own midway through the round, but Esparza turned it around and landed in top control. Esparza obtained full mount and started unleashing more ground-and-pound and forced Namajunas to turtle up. Esparza continued to throw shots until the end of the second round. Esparza shot for a takedown to start the third round and quickly went back to work and eventually got back mount on Namajunas. From there, it wasn’t long until Esparza sunk in the rear-naked choke and forced Namajunas to tap.

Charles Oliveira may have missed weight for his featherweight contest with Jeremy Stephens, but it didn’t stop him from putting together a clear-cut win. Oliveira wasted no time in trying to take the fight to the ground, but it was Stephens who got the takedown and top control. Oliveira was able to sneak in an armbar attempt that lasted a couple of minutes as Stephens fought it off with a slam and patience. Stephens escaped and tried to get back up, but Oliveira quickly closed the distance with a clinch and pushed Stephens against the cage. Oliveira kicked off the second round with a takedown and quickly grabbed Stephens’ back. Oliveira then worked over for an armbar and threw a few punches to soften Stephens. Oliveira was then able to fully grab a hold of the arm and Stephens rolled out of the armbar and got back to his feet. Stephens ended the second round avoiding more submissions—including another armbar at the very end of the round. Oliveira attempted to goad Stephens into coming to the ground a few times in the third round to coast to the decision, but Stephens would not engage. Oliveira pulled a guard with a minute left and rode out the remaining time on the receiving end of Stephens’ ground-and-pound.

Daron Cruickshank made it ugly, early for fellow lightweight K.J. Noons. The first round saw Cruickshank dominate the striking game with combinations that kept Noons moving and against the cage. Cruickshank was also able to ragdoll Noons to the mat at one point and followed up with hard shots. The fight was momentarily stopped also for an eye poke from Noons. The second round saw Noons open up with an eye poke that crumbled Cruickshank. Noons followed up, but referee John McCarthy stepped in to stop the fight once again. Cruickshank said he couldn’t see out of the eye and the fight was stopped due to a doctor stoppage in the second round and declared a no-contest.

Yancy Medeiros scored a big win, submitting Joe Proctor  late in the opening frame. Proctor opened the fight using leg kicks to establish distance. Medeiros started picking away at Proctor one strike at a time. Medeiros started his trek to the end of the fight with a spinning back kick that folded Proctor who was clearly hurt by the shot against the cage. Medeiros followed up with some shots and then went for the guillotine choke. Proctor had no answer for the choke and eventually tapped giving Medeiros the submission victory.

The main card started with a great fight between Jessica Penne and Randa Markos. It was a very technical battle on the ground as Penne got the better of the ground exchanges. Penne kicked the fight off with a throw and began her control of Markos on the ground. Penne attempted a couple of submissions, but couldn’t quite finish off Markos. On the feet, Markos was landing the better of the exchanges and was much more accurate than her opponent. Markos attempted to land hard right hands and, in the third, attempted numerous spinning backfists to no avail. The third round really solidified the decision in Penne’s favor. Penne worked on some hard ground-and-pound throughout the third, but Markos was able to survive the punishment. Penne walked away with the split decision victory.

Felice Herrig and Lisa Ellis traded submission attempts in the final fight of the preliminary card. Ellis opened the fight with a quick takedown and subsequently landed a guillotine choke. Herrig fought through it and the two traded reversal attempts on the ground. Ellis trapped Herrig’s arm, but Herrig was able to get out and then had a triangle attempt that quickly turned into a reversal. The second round went the same way as the fight hit the mat. Herrig locked up the armbar and, this time, she succeeded in securing the tap and taking the submission win.

Bec Rawlings and Heather Jo Clark certainly showed their disdain for each other in the penultimate fight of the preliminary card. Both Clark and Rawlings were aggressive with their striking, especially to kick the fight off. Rawlings was able to close the first round with a takedown, but Rawlings landed in a precarious position as Clark was close to taking Rawlings’ back. Clark picked up where she left off in the second round as she secured a takedown and was able to take Rawlings back early on. Despite threatening with the choke, Clark was unable to ever finish it in the second frame. The two continued their aggressive back-and-forth striking in the third. The two settled their beef from the past season of TUF with a hug and it was Clark who took the unanimous decision victory.

Seo Hee Ham and Joanne Calderwood put together a great UFC debut with their three-round battle. Calderwood was able to sandwich Ham a few times against the cage over the course of the fight and use the clinch to land solid punches and knees. Calderwood really turned up the heat in the third round as she smoked Ham with a killer front kick. Ham stayed on her feet and was able to walk through it, but Calderwood was able to bring Ham to the mat and attempted an arm-triangle. Ham was able to escape, but was not able to put forth enough in the fight as Calderwood captured the unanimous decision.

Tecia Torres kept her professional record unblemished with a dominant win over Angela Magana. Magana attempted to use her five-inch reach advantage early in the fight. Torres was having none of it and was able to get the better of the exchanges. Torres was tenacious on her way in on Magana with great combinations and controlled the distance with push and side kicks that threw Magana against the cage a few times. In the third round, Torres’ control of the distance was able to help her hurt Magana. Magana attempted a Hail Mary takedown, but Torres was able to keep Magana from following through. Torres was aggressive to end the fight and her striking domination was able to secure her the unanimous decision victory.

Aisling Daly attempted to chase Alex Chambers down to start the fight and work it into a takedown. Chambers turned the table with a right hand that led to a nice takedown. Daly was able to grab a hold of Chambers’ arm and attempted an armbar, but Daly was unable to separate Chambers’ hand lock. Daly took the submission as a chance to reverse position and grabbed a hold of top position. Chambers was able to get back to the feet, but Daly quickly landed an outside trip to get it back to the mat. From there, Daly went to work from mount and attempted a second armbar. This time Daly was able to secure the submission and the victory.

Although less experienced, Angela Hill earned a lopsided decision win over Emily Kagan in the first bout of the night. Kagan attempted to make it a grinding fight, but it was Hill who kept the fight standing. Hill made it a striking clinic with her knees in the clinch and distance striking. Kagan attempted 10 takedowns in the fight, but it wasn’t until the last minute of the third when she landed her only two takedowns of the fight. Hill thoroughly dominated Kagan on the feet with some power shots and was able to secure the unanimous decision victory.