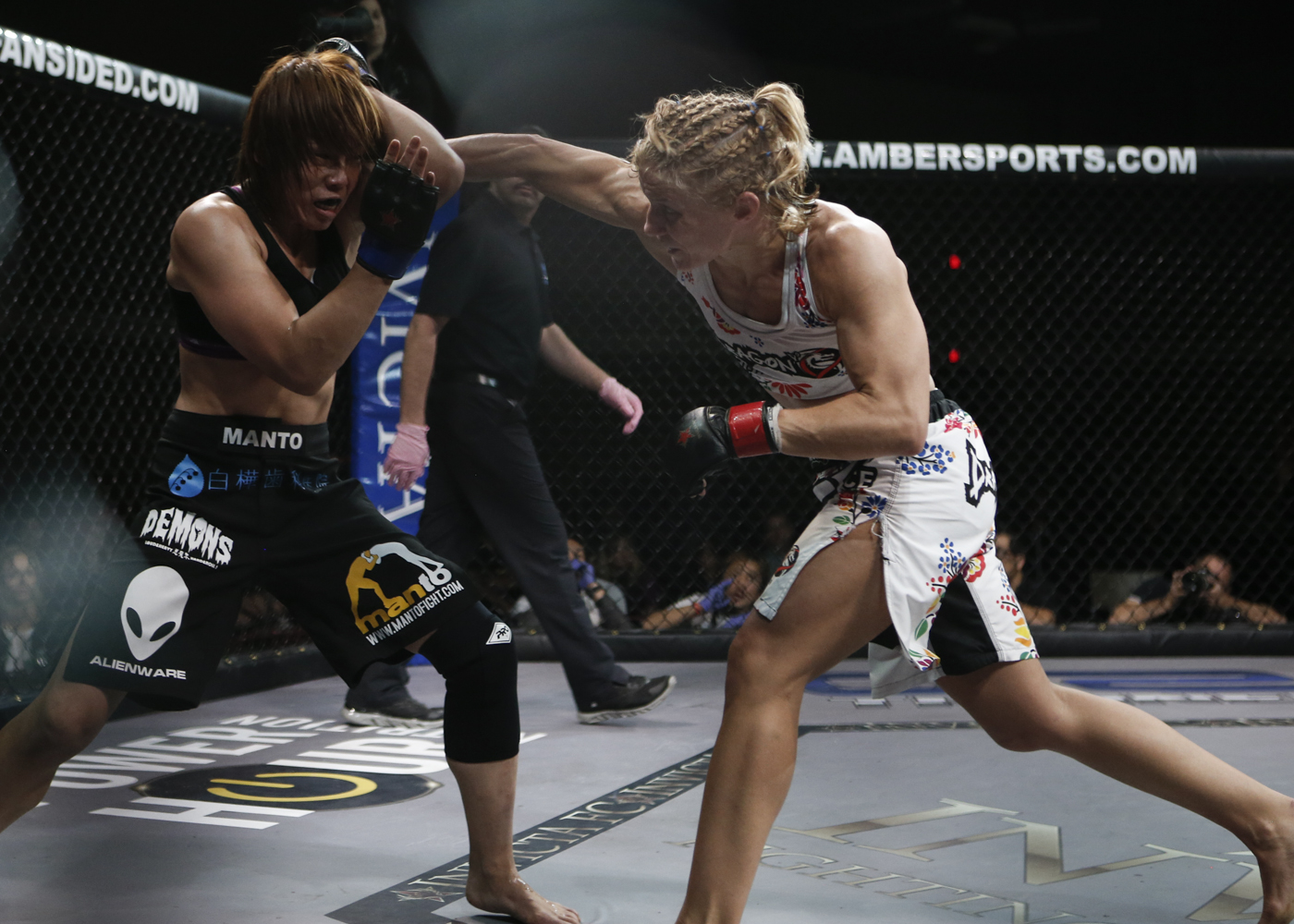 At this point, it’s safe to say that the lightweight division will likely be the least busy division in women’s MMA. That’s because there aren’t as many women inhabiting the ranks and they don’t fight nearly as much. However, those things might change, assuming Invicta continues its plans to lay out the division in the near future. In October, Jozette Cotton was the only lady to compete in the top 15, although it was at a catchweight in Bellator. She was able to outlast Holly Lawson via decision, holding her steady in the second spot. In November, no 155-pounder that is ranked is set to fight as of the writing of this story. However, Lisa McCallam is a name to watch out for, as she returns following a two-year absence from the sport. An impressive performance could find her snagging a spot in the rankings.

Two departures have opened up two opportunities in the featherweight division, while another woman has taken it upon herself to storm up the rankings. Amanda Bell’s recent performances, including a TKO win over Maria Hougaard Djursaa at Invicta FC 9, have propelled her up the rankings and allowed her to crack the top 10. It was the only finish on the Invicta card, and Bell put on an impressive showing en route to the victory. Lack of activity by Fiona Muxlow and a move to bantamweight for Kelly McGill were cause for their removal from the rankings, but it opens up space for two formerly ranked fighters, Marina Shafir and Gabrielle Holloway. In November, Pannie Kianzad, one of the division’s top fighters, will drop to 135 pounds in an attempt to capture Cage Warriors gold, as well as a potential spot in the UFC in the near future.

The bantamweight rankings have remained at a standstill since last month, as none of the ranked women had a fight in October. However, Jessica Eye has a fight in November that will be imperative for her ranking. She is 0-1 (1 NC) in the UFC and in dire need of a win. She takes on Leslie Smith, a fighter who is on the verge of cracking the top 15 herself. Meanwhile, Holly Holm now has her UFC debut date set. She will compete in December against The Ultimate Fighter 18 veteran Raquel Pennington. That is big news for a highly popular women’s bantamweight competitor. Fans are wondering how Holm will fare against the best females in the world.

As with the other weight classes thus far, the flyweight division was relatively quiet in October. However, the division’s best fighter defended her Invicta title in the ranking period. Barb Honchak used a grinding attack to stifle game challenger Takayo Hashi in the headliner of Invicta FC 9. It was a performance that solidified Honchak’s spot atop the rankings, as well as making the case for her spot near the top of the women’s pound-for-pound talks. In November, we will see additional changes to the division. Nina Ansaroff will drop to 115 pounds to fight Juliana Lima in her UFC debut, leaving the division without one of its best fighters. Jennifer Maia will also be in action in Brazil, as she looks to push herself past her No. 3 ranking. Expect major shakeups come December.

The strawweight division still continues to be held up by The Ultimate Fighter 20, but women who are not on the show continue to make moves in the division. The biggest move took place in the Invicta FC 9 co-main event, where Poland’s Karolina Kowalkiewicz scored a win over Japanese uber-prospect Mizuki Inoue to blast her way up the rankings. She made a significant move up from the 14th spot all the way to the No. 7 spot. Speaking of the TUF tournament, we have seen some of the top 15 compete already, but since the bouts are exhibitions, they are not considered when forming these rankings. Carla Esparza, Joanne Calderwood and Felice Herrig all made it past the round of 16, beating Angela Hill, Emily Kagan and Heather Clark, respectively. However, Tecia Torres was eliminated by Randa Markos in her bout, but has become an injury replacement for Justine Kish and gets another chance against Bec Rawlings. Moving forward, the notable bout for the upcoming month takes place in the World Series of Fighting promotion, where Jessica Aguilar will reportedly defend her title against Kalindra Faria despite Faria’s reported contract disputes with the XFC. Should that fight occur, it will be a huge contest to watch in the division.

Some cleaning up of the rankings has taken place, as inactivity and a retirement have caused massive changes to the atomweight division this month. Simona Soukupova, Lacey Schuckman and Diana Rael have all been removed for inactivity within the division, while the retirement of fan-favorite Nicdali Rivera-Calanoc is the reason for her removal. Rivera-Calanoc retired Saturday night after dropping a decision to Jodie Esquibel at Invicta FC 9. Esquibel’s win allowed her to catapult to No. 7 in the rankings. Cassie Rodish scored a win in the RFA, while Amber Brown stormed up the rankings with a gritty win over a game Liz McCarthy. Janaisa Morandin defeated Arielle Souza this month in an atomweight tournament, but could not continue in the finals, where Souza replaced her and was victorious. Although she did not win the tournament, Morandin’s win over the eventual winner earned her the consolation prize of a ranking at 105 pounds.