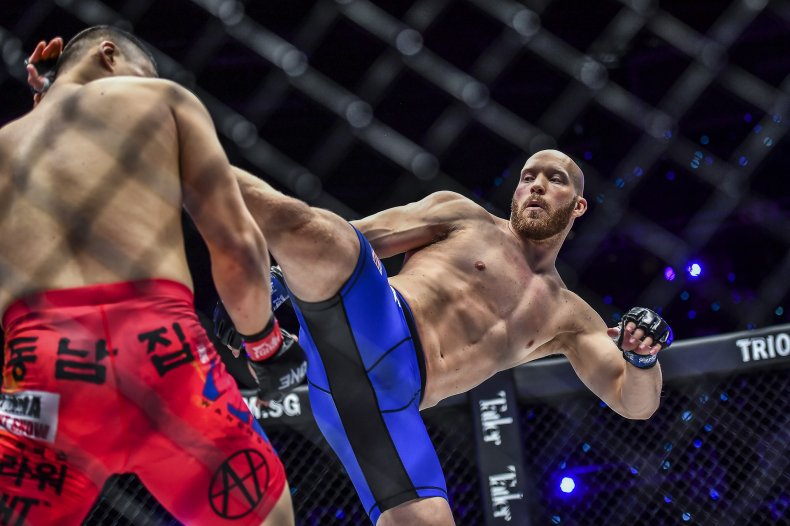 English mixed martial artist Paul Elliott is built like a brick shithouse. That’s really the only way to put it. He may not be super tall at six-feet-one-inch tall, but at 240-plus pounds, with very little body fat, the guy is a rock. In fact, while it might look like he is a competitive bodybuilder or powerlifter, his background was mostly in team sports.

“It was soccer first I was playing, then I went over to kickboxing when I was 15,” Elliott told Combat Press. “I quite liked this sport, and I quite liked the fact that everything relied basically on myself, as opposed to a team sport. So, I started doing that and picked everything up pretty quick. I started fighting pretty quick. I started knocking people out pretty quick. And, it got to the point where I was struggling getting opponents in kickboxing, and my friend suggested MMA. I would watch MMA all the time anyway, like The Ultimate Fighter and all that, so I did watch that a lot. Then, I went to the MMA gym with my friend, had literally like two sessions, and, then, they put me in for my first amateur fight.”

Elliott grew up in Middlesbrough with his parents, younger brother and older sister. His brother is a badminton player, and his sister is a professional hockey player, who once carried the Olympic torch for Great Britain. In addition to soccer, Elliott also played rugby growing up.

“I had an average family, you know?” said Elliott. “It was a nice area where I grew up. It wasn’t too posh, and it wasn’t too scruffy, you could say. It was a nice area. My mom and dad are together. They met in the Army, so we were sort of like an Army family, I guess you can call it. We were all very regimented because of them. They were very sporty as well. All our family is sport base really. We grew up that way, and I think that’s probably contributed a lot towards me doing what I’m doing today.”

Elliott started his training across a couple different kickboxing gyms, and eventually an MMA gym. He had nine above-the-waist kickboxing battles as an amateur, plus one K-1 rules bout, and he won all of them. He has now been training out of Akurei MMA under Nathan Boyce for nearly four years. After going 2-0 as an amateur in MMA, he made his pro debut in Nov. 2017. After going 3-0 as a pro, plus an additional record-ineligible win, he made his ONE Championship debut last March.

At ONE X on Mar. 26, Elliott faced a major step-up in competition when he took on Korean heavy hitter Kang Ji Won. Kang was 5-1 as a pro, and had already fought three times in the ONE Circle. While Elliott had won all of his previous fights by first-round knockout, the tables were turned in his promotional debut. Kang knocked out the Brit in just under a minute.

“I’m at higher level now. You know, on a lower level, you can get away with doing that. At this level, you can’t. I need to pace myself and actually pick my shots a bit better. Honestly, I really don’t know why I did that. I rushed it far too soon. I definitely feel like, because of that, I believe I’m going to be a lot better in this fight.”

To be fair, Elliott’s ONE debut was after a nearly three-year layoff, primarily due to injury. All combat athletes suffer nagging injuries from time to time, but he had a pretty significant one in Sep. 2019 that required some serious surgery the following December.

“I had an ACL reconstruction on my right knee,” Elliott said. “I also had a meniscus tear in my left knee. I’ve had a ruptured left pec. You know, this sport’s obviously taxing on the body, but, thankfully, I’m good to go. The ACL was the bad one, though.”

After his body was healed, not only was Elliott given the toughest opponent of his career, but he was also on the biggest fight card that ONE Championship had ever put on to celebrate their tenth anniversay.

“I’ll be honest,” said Elliott. “Being in that place – because it was a huge card to be on for my first fight, which I was honored to be on – but being in that hotel with all those top fighters – like Demetrius Johnson was there – and, you know, all these top fighters I have been watching for years, and I was in the same realm as them. It was almost a bit of a surreal experience, so that possibly could have contributed towards the whole thing. But, it’s neither here nor there now. I think, maybe, if I didn’t blow my knee out, potentially, I would’ve been fighting more. It could have changed things, but who’s to know?”

Well, Elliott may have dropped his ONE debut, but he did come out injury free, and got right back to training. He later found out that he would be back in action on Friday, Aug. 26, when he takes on Croatia’s Martin Batur at ONE 160. He has taken his learning experiences from his first loss and channeled them into his training for his upcoming fight.

“Even in the lead-up to this fight, I’m a lot more cool and collected,” said Elliott. “I feel generally better. I’ve not had as much anxiety as far as the whole concept of stressing out about a fight. I’m not getting the clammy hands. I’m not getting it too much, so that’s good. I’m taking one day at a time. The training, you know, it’s just improving each day, and I think that will show in this fight.

Batur will be in the same position tomorrow as Elliott was five months ago, as he will be making his ONE debut. He currently sits at 7-3 as a pro, and he has finished most of his opponents. Also, like Elliott, he is built like a brick shithouse, but he will have a three-inch reach advantage. However, this is not Elliott’s first rodeo, and he welcomes the challenge.

“He’s tall,” admitted Elliott. “He’ll have a longer reach, I believe. No doubt, he’s probably got longer leg reach. He’s more experienced, but I’m as game as they come. I’ll fight anyone. I feel like my ability is good enough to be in there with most people. I feel like my skill set on the feet is good enough to put anyone out. So, that’s what I’m seeing from me. From him, I would cast him as a well-rounded individual. Nothing really jumps out, in my opinion, to say he’s super at this aspect or super at that aspect. I believe he’s pretty good at, you know, areas, from what I’ve seen.”

The one aspect that Batur has showcased more in his past fights than Elliott has is his ground game. He has showcased some wrestling skills, which Elliott has not had to use much in his pro bouts. However, Elliott explains that this is by design.

“I’ll be honest,” said Elliott. “I use it a lot in terms of keeping things on my feet. It’s more of a defensive wrestling approach – stopping people taking me down. We do a lot of cage work. I’m fast for my size. That’s what helps me a lot. I’m fast on the feet. I’m also very fast on the floor too, in terms of sprawls and scrambles. If he ever tries to take me down, or get close to it, I’ll be scrambling. I’ll be scrambling pretty quick, getting myself back up. In terms of, like, jiu-jitsu-wise, I’m good at jiu-jitsu. I don’t try and go for submissions in fights. I’ll always strike. But, if the opportunity to do it and submit them is there, and it is screaming at me, I will take it. But, it’s more of keep hitting them until they fall.”

Obviously, Elliott is not looking past his opponent. He fully understands that he has not won a fight in almost three years, and that is the first order of business. However, after so much time off due to injury, he is definitely ready to stay busy.

“[I plan to] just keep fighting, keep improving, keep training, because you only have so much time in this sport,” Elliott said. “I totally get that. I’m 30. Everyone says their primes are at different ages, but I’m still fairly young as a heavyweight, I believe. So, I plan to keep fighting, keep getting better and keep putting my name out there to become more aware to the MMA world and prove myself at the top.”

At ONE 160, Elliott plans to make big waves against Batur. He has learned a lot from his last fight, and he knows he can’t rush things. But, he also wants to make sure it is not a boring fight.

“It’s going to be entertaining,” said Elliott. “Every single shot I’m going to throw, I’m going to try and end the fight. I think it’s a recipe for a good scrap.”