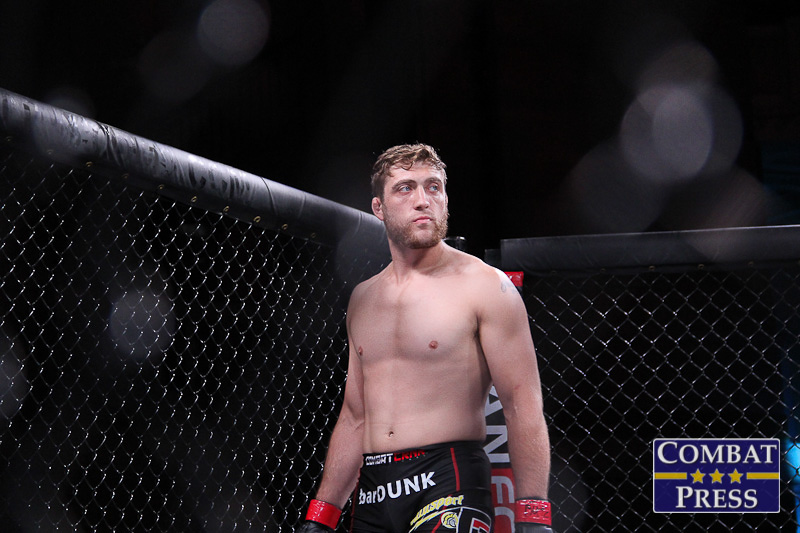 In the age of social media, many people are out to create some kind of spectacle of themselves, and with MMA fighters, as with many athletes, it can be rather rampant. Instagram alone has a ridiculously large database of ridiculous fighters doing ridiculous things. Unfortunately, there are a lot of cases of a fighter goofing around on social media, when his record is the most ridiculous thing about him.

On the opposite end of the spectrum are the fighters who are focused. Regardless of what they tell you, it is really easy to pick out these fighters. Many times, their records reflect it. Take Gerald Meerschaert as a case in point.

Meerschaert is a longtime MMA veteran who trains out of Roufusport in Milwaukee. The Brazilian Jiu-Jitsu brown belt was the Resurrection Fighting Alliance middleweight champion. He had 32 fights under his belt before signing with the UFC for his promotional debut in December.

With 17 submissions already on his record, it was no surprise to see Meerschaert score two more in December and February. He is now riding a seven-fight winning streak and holds a 2-0 mark in the UFC. You know how many goofy memes he has posted making fun of an opponent? Zero. Zilch. Nada. The fact of the matter is that he focuses on one thing: his training. He has very little time for anything else.

“I’ve pretty much got time to make my food and hang out for a second,” Meerschaert told Combat Press. “I’ll watch a little bit of things before I go to bed, but that’s about it. I’m ready for the new Game of Thrones to come out. I’ve been waiting for that.”

Eat. Sleep. Train. That’s a pretty simple schedule. While other guys with miserable records are goofing off, Meerschaert is serious about his craft. Even as a 30-plus-fight veteran, he’s only 29 years old, and he’s really coming into his prime. In fact, almost everything that exists in the social-media space for the last couple years is Meerschaert training at the gym. That’s it. The proverbial proof is in the pudding, as his focus is clearly paying off.

In Meerschaert’s last fight, which took place at UFC Fight Night 105, he faced Ryan Janes. Meerschaert tapped out the Canadian in a mere minute and a half. It was a quick win, but there’s always something to take away.

“I feel like I should have warmed up a little bit harder,” Meerschaert said. “The guy bum-rushed me a little bit, and I kind of half expected that. I always say if someone comes at you super crazy, it’s not always the best idea to meet force with force. Sometimes, you just got to let him make a mistake for you, and I could feel the nervous energy when I locked up with him.

“It was such a quick fight. I just stayed relaxed, and, if anything, it just builds my confidence, knowing that even if I’m in a bad position, I can still protect myself and find a way to beat somebody and finish somebody when it looks like I’m not in a good spot.”

After fighting three times in five months, Meerschaert had a few months off. However, he soon found out he would be fighting on this Saturday’s UFC 213 card, which is the marquee event of International Fight Week and takes place at the T-Mobile Arena in Las Vegas. He will face Brazilian fighter Thiago Santos in a middleweight showdown. With a bunch of Roufusport fighters in action over the next couple weekends, the octane is running high in the gym.

“It’s pretty much as good as it can get,” Meerschaert said. “I’m feeling great — right where I need to be. My weight’s better than it needs to be, so I’m pumped.

“Training is all pretty much the same. We all have fights coming up, so that ups the intensity. Me and [Mike] ‘Biggie’ [Rhodes] are always training together. We got our other roommate, J.P. [Saint Louis], who’s a good up-and-comer, and he’s training with us. Then, we have Belal [Muhammad] and Anthony [Pettis]. Obviously, Anthony and Belal fight the same night I do, and Paul [Felder] fights the week after. We’re all getting ready for big fights in our careers. Everybody ups the level and nobody’s getting injured or getting dumb little aches and pains. We’re all on schedule.”

Santos is a Muay Thai fighter who holds a purple belt in BJJ. He’s well rounded and able to take the fight wherever it goes.

“I’m excited about it,” said Meerschaert. “I mean, he’s tough, and it’s a match-up of contrasting styles, so he kind of plays right into my game. Pretty much all of his fights are on Fight Pass. He comes out, he swings big. It’s not a ton of technique as far as setting up his strikes, but he swings hard, he’ll throw big hard punches, and he’s not afraid to get in there and scrap.

“He looks like a physical, strong dude, but even that being said, even though he won his last fight, he got dropped by [Jack] Marshman in the first round. He lost to Eric Spicely, who’s a straight jiu-jitsu guy, and I think my ground’s just as good, if not better. I’ve got more tools than just jiu-jitsu, which plays into my game on this one.”

A win over Santos puts Meerschaert in a great position with an eight-fight winning streak and an undefeated record in the UFC. He is not trying to ask for more than he feels he deserves at this point, but he wants a significant climb up the ladder.

“When I get a finish, I’m going to have to take a step up in competition,” Meerschaert said. “I’ll call for a step up in competition for sure. If I’m not getting a top-15 guy, then one or two more, and maybe start getting some ranked guys here — 3-0 with three finishes is kind of a big statement. This guy’s been battle tested. He came up through [The Ultimate Fighter], and he’s got a decent record in the UFC. After this, I’m definitely going to need a step up.”

Meerschaert is a focused guy. He spends every waking moment concentrating on making a big impact as a UFC middleweight. He’s not goofing around doing backflips off picnic tables or making up memes just to have a manufactured social-media presence. This will likely lead to big things down the road. The next step comes on Saturday night, when he fights in the UFC 213 prelims.

“If you want to see me set the tone for the other Roufusport fighters, tune in to UFC Fight Pass, and watch me do the most American thing I can possibly do on 4th of July weekend, and beat up a foreigner for money on TV.”

Meerschaert would like to thank all of his coaches and training partners at Roufusport, as well as his family, friends, fans and sponsors. Follow Meerschaert on Twitter: @The_Real_GM3
Advertisement