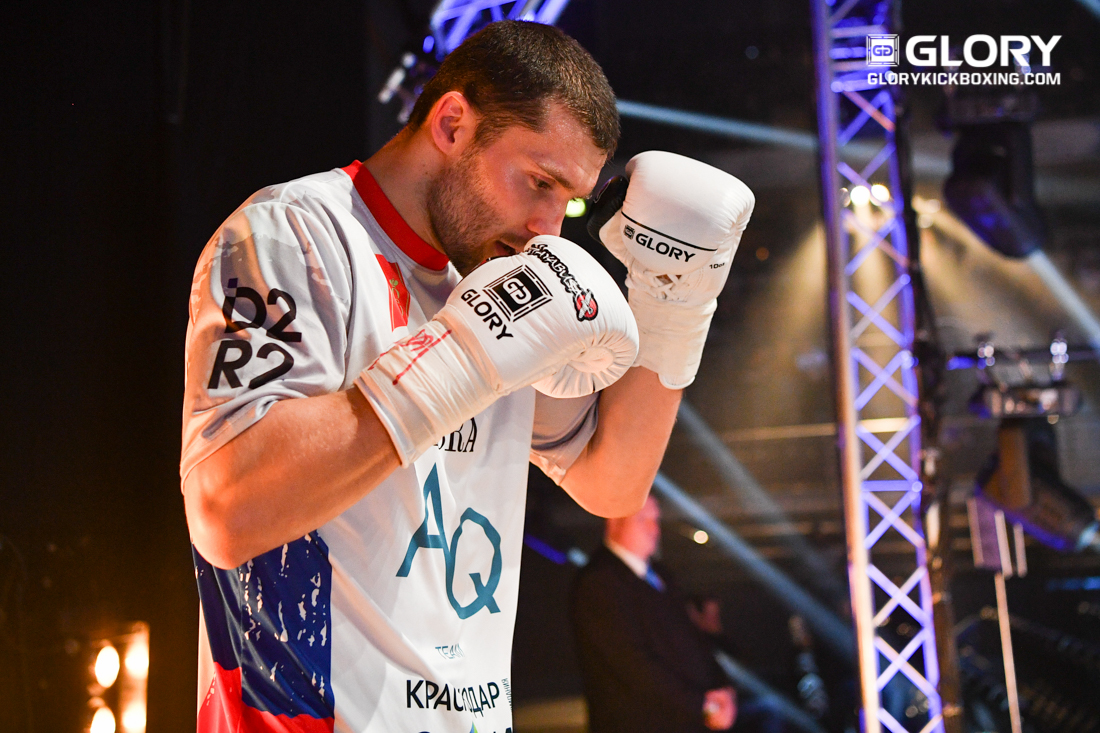 Combat Press writer Ruslan Navshyrvanov spoke to Moiseev as the kickboxer prepares for this weekend’s fights.

Did you watch GLORY 41 in Den Bosch?

I didn’t watch the tournament, only [saw] results.

They returned to an open scoring system after each round. Do fighters see the score? What’s your opinion about this system?

For me, it doesn’t make difference. I think it is very interesting for the audience. If I watched the fights, it would be interesting for me. But I can’t say how it will affect us as fighters.

So, you don’t know if you will see the score during the fight?

No, I don’t know presently.

Team Coliseum was in your corner at GLORY: Collision. Did you have your training camp in Utrecht, Netherlands?

Yes. I prepare myself there sometimes. They help me during my fights on GLORY. And this time, they also will be in my corner.

What do you think about Niclas Larsen, who will fight in the same four-man tournament with you at GLORY 42? GLORY actively promotes him after the story of his disease and comeback.

To be honest, I didn’t follow him intently. I saw that he won his last fight, but I didn’t notice something extraordinary about him. He is difficult — knees, nonstandard techniques. That makes him difficult.

And your semifinal opponent, Christian Baya? He appeared in GLORY as a no-name and won a fight over Josh Jauncey.

Christian is a strong fighter. You need special preparation for him, which is what we are doing now. The most important thing is to be focused in the fight, and everything will be good.

Do you have to pass obligatory drug tests in GLORY?

They always send mails that it is forbidden to use anything. I didn’t have any drug tests. There is always a possibility, but I didn’t face it now.

So, now it is only written warnings?

Yes. But guys who took part in U.S. tournaments said that they had doping tests. I think that it is not a GLORY initiative, but the law of the state where the tournament took place.

You took part in the Kung Fu World Championship in January. Why did you decide to take part in a tournament where the level is much lower than GLORY or Kunlun Fight?

It was a good financial offer, plus easy opponents. I didn’t realize why it ended like that. Actually, I was winning the fight and thought that soon I will finish. But those boots played a bad joke on me. He kicked me to the back of the head with a hard part of the boot. My corner started to push me forward improperly. I started to rush and forgot about defense. And I got caught as a result.

Who was the most difficult opponent in your career?

I cannot even say. Many of them were difficult. High-level fighters are tough.

Gökhan Saki signed with UFC. Is this a good decision for him?

Yes, I know that he’s debuting in UFC. I’m happy to know that he is back into sports. He is a talented fighter and I think he can show himself there. Viewers will watch him with interest. It is a step forward, for sure. I only worry about one thing: He hasn’t fought for a long time. And it would be better for him to have several MMA fights before he goes to the UFC.

What do you think about such tendencies in general? Right now, many fighters move or plan to move to MMA and boxing.

I don’t know. Everybody has his own goals. Everybody looks for his own way. For example, Robin [van Roosmalen] is successful in MMA.

Who do you think are the top three kickboxers?

Let’s narrow it down. How about the top three in the 70-kilogram division?

What’s the most-anticipated fight in kickboxing for you as a viewer?

I would like to watch a fight between Pavel Zhuravlev and Artem Vakhitov. Zhuravlev is a very strong fighter, and he would make for a great clash with Vakhitov. There are so many fights I would like to see. [Badr] Hari against [Rico] Verhoeven, part two. I was at Collision and nothing was clear — who is stronger and who is weaker.

The first round was interesting.

I wouldn’t say it was interesting. It was super-cautious and nobody did anything significant. They didn’t have enough time to shine. And we all know how Badr can flash. And Rico didn’t switch it on. He was too careful. So, the big question remained unanswered.

I enjoyed the fight because of the buzz that Moroccans created.

But the energy is what kickboxing needs now.

That’s very cool! And I was happy to see so many people at the arena and such a great hype. Hari is legend. You can like him or you can dislike him, but you should recognize what a big contribution he made. If he stays in GLORY, he will be a big addition for them. I only wish Gökhan Saki would come back to GLORY.