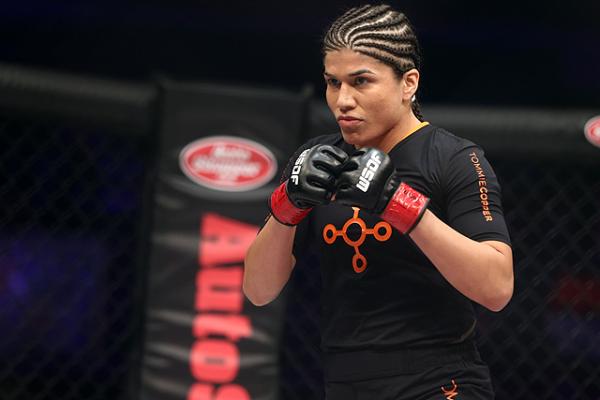 One of the brightest spots for the UFC in 2014 was its successful integration of a brand new women’s 115-pound division.

Starting with 16 of the best and brightest stars, many of whom had been signed from the Invicta FC roster, the UFC promised fight fans that its newest division would be overflowing with talent and feature the best female strawweight fighters the world had to offer. Names like Carla Esparza, Joanne Calderwood and Felice Herrig were all quickly added to the UFC’s roster, and as the promotion continued to collect talent like current champ Joanna Jędrzejczyk and rising star Paige VanZant, the new division became one of the most popular the UFC has to offer.

What’s possibly even more impressive than the UFC’s ability to create an interesting and competitive weight class in barely a year is that the company has done so without arguably the best 115-pound woman in the world. It’s no surprise that Jędrzejczyk climbed to the forefront of many of the strawweight ranking polls following her win over Esparza to take home the UFC strawweight belt earlier this year. The best of the best truly do compete inside the Octagon. Nearly 100 percent of the time, if you’re looking for the best fighter in the world at a particular weight, the UFC champion in that weight class is going to be the correct answer. However, some fighters do end up slipping through the cracks and getting the short end of the stick due to a little UFC bias. The most obvious example of this lately has been perennially top-ranked strawweight Jessica Aguilar.

Aguilar had been considered the top 115-pound female in the sport for two or three years before the UFC decided to dip its feet into the women’s strawweight talent pool, but she was pretty much the only top-ranked strawweight that the company wasn’t able to get its hands on. Aguilar signed a deal with the World Series of Fighting in November 2013, stating that she was ready to fight the best competition in the world. Less than a month later, the UFC announced the start of its own 115-pound division. In the process, the UFC took just about every other top strawweight off the market, leaving Aguilar with very few potential top-tier opponents.

Aguilar has since come out and said she never really had any contact with the UFC during that time. Whether that was because the UFC was not interested or the timing just didn’t work out, well, that is a mystery. But, in the end, Aguilar signing with the WSOF left “Jag” for dead in a promotion with no one near her skill level. It also left the UFC to create a new division without the consensus top fighter from the division.

After making the most of a bad situation and winning three fights while competing under the WSOF banner last year, Aguilar was finally freed from her contract earlier this week, officially opening the door for “Jag” to join the UFC roster and attempt to prove herself as the top female strawweight fighter in the world. The UFC locked up virtually every strawweight worth mentioning when it created its division, and though it can’t exactly be blamed on the WSOF, Aguilar fell out of the public eye when WSOF head Ray Sefo and company couldn’t get her legitimately exciting opponents. Now that Aguilar has hit the market as a free agent, there’s only one place for her to go if she doesn’t want to continue being “the other best 115-pound woman in the world.” That, of course, would be the UFC.

Aguilar has made it clear that she wants to prove herself as the top strawweight in the sport. If that’s true, then signing with the UFC should be nothing more than a formality at this point. Aguilar has had a solid career. She has been doing a fantastic job adding to her resume over the last few years during her now 10-fight winning streak, but she’s already fallen from the top spot in some rankings behind the top women in the UFC. That’s going to continue unless she can start taking some of them out herself.

It seems almost like a forgone conclusion that Aguilar will sign with the UFC at some point in the near future. When she does, it won’t take long for her to start making waves in the division. The UFC’s 115-pound weight class is as drama filled as they come, but Aguilar hasn’t been shy about trading barbs with one of the UFC’s finest in former champion Esparza. Aguilar could find herself in a great spot upon entering the Octagon if she can convince the UFC brass to give her a shot at Esparza right away. Aguilar is on a long winning streak and should immediately become a member of the top five in the division upon signing a contract, so it shouldn’t be too hard to get the fights she wants.

Of course, despite all of the trash talk between Aguilar and Esparza, there’s still the possibility that Aguilar could walk into the UFC and instantly be awarded a title fight. In a perfect world, the UFC would throw Aguilar on television or pay-per-view a time or two in order to get the Zuffa-only fans more familiar with her as a contender, but the division is so new and still so frenetic that it makes sense right now to grant a title fight to a top-ranked fighter who is on a 10-fight winning streak. As much as the UFC seems to love Jędrzejczyk, the Polish fighter is still largely unproven and needs a few quality victories in order for fight fans to truly buy her as the legitimate champion and the world’s top strawweight. A win over Aguilar would do more for Jędrzejczyk than a win over anyone else would. If the UFC truly thinks that its champion is the best, there’s no better way to prove it.

If Aguilar wants to be the best fighter in the world, there’s only one place she can go. The UFC has plenty of competition waiting for her arrival, too. It’s all but certain that “Jag” will end up in the Octagon at some point this year. Once she does, she’s going to get a chance to prove her worth fairly quickly. Whether that comes against Jędrzejczyk, Esparza or someone else is uncertain, but it probably doesn’t matter to the former WSOF champ. All that matters is reclaiming her title as the best in the world.