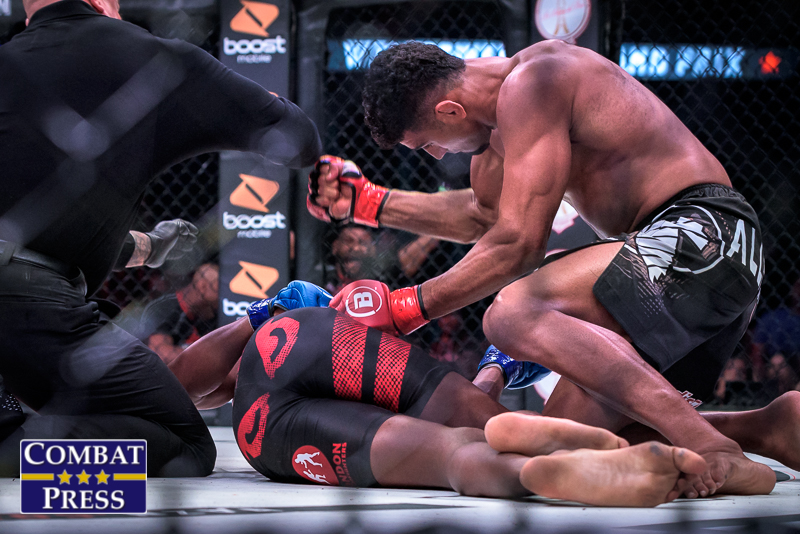 Originally scheduled to have Patricky “Pitbull” Freire defend his lightweight championship versus Sidney Outlaw in the evening’s main event, injury has now removed Pitbull from the card as welterweight contenders Douglas Lima and Jason Jackson will now serve fans in a five-round main event.

As a pro competitor since 2006, Lima has been around the block and presents a level of fighting experience that can rarely be matched. Having spent the past decade under the Bellator banner, he’s accustomed to competing against the world’s best.

Alongside his brother and former UFC veteran Dhiego Lima, family ties are strong as they run and own American Top Team – Team Lima. While the 34-year-old Lima is possibly fighting beyond his prime years, the Brazilian’s one-punch knockout power and black-belt-level jiu-jitsu still position him as the third-ranked welterweight in the Bellator rankings.

Jason Jackson (15-4-0) suffered defeat upon arriving at the Bellator 170-pound division, but hasn’t looked back since. Now boasting a 6-1 Bellator record, behind a five-fight winning streak, Jackson is one significant victory away from a title challenge.

A product of Sanford MMA in Deerfield Beach, Fla., Jackson is surrounded by some of the planet’s most dangerous fighters, and he’s likely to enter the Bellator 283 main event versus Lima as the betting favorite. Notable successes over Jordan Mein, Benson Henderson, Neiman Gracie, and Paul Daley are all the confidence Jackson needs to take out another top challenger in Lima.

Fans will likely feel disappointed in Pitbull’s withdrawal from the main event. Still, Lima and Jackson will unquestionably deliver an elite-level main event to supplement the loss.

We must commend Outlaw, as a losing weekend in Washington could ultimately remove him from the title picture. Outlaw’s bout with Pitbull was postponed, but he’ll need to secure a victory over the Bellator newcomer in order to keep his position as the number-one contender for the lightweight strap.

With that said, Outlaw’s well-rounded skill set will position him as a significant favorite at the sportsbooks. As we could expect, a juiced moneyline price on Outlaw, Pennsylvania sportsbook promo codes can remove some of the strain on our return on investment, and you can find them here.

Don’t expect Musayev (18-4-0) to be a walk in the park for Outlaw, no matter what the projected betting odds may be.

Representing Azerbaijan, Musayev is the former challenger of the vacant RIZIN lightweight championship. Before his failed title attempt in RIZIN, he’d successfully won 14 consecutive fights, including a win over Pitbull for a lightweight grand prix title under the RIZIN banner.

It would be tragic for Outlaw if Musayev – as a last-minute replacement and company debutant – came in and stole his limelight. As Musayev does own a victory over Pitbull, should he defeat Outlaw, it would be hard to deny putting him next in line for a shot at the champ.

Below is the full Bellator 283 fight card.