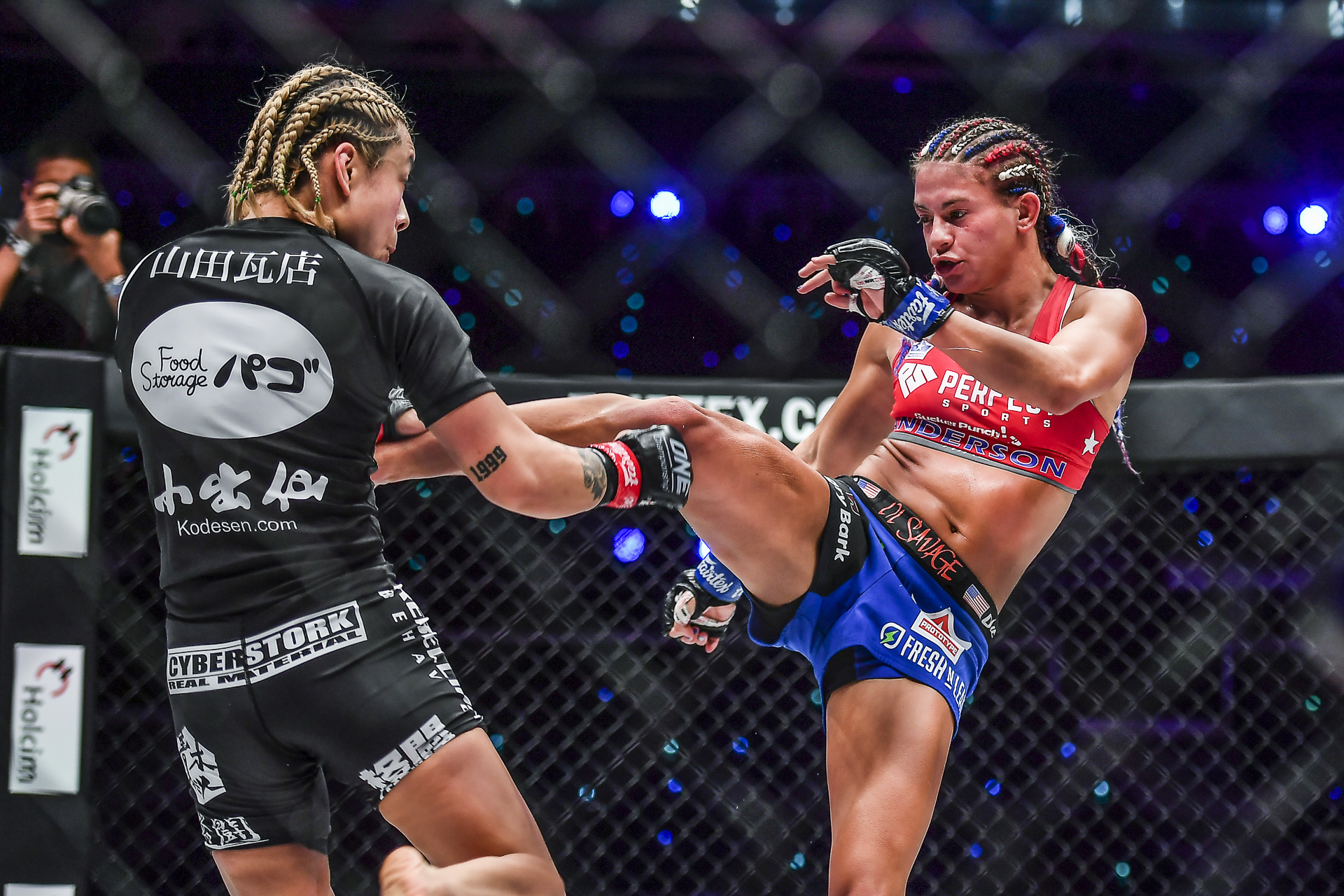 Alyse Anderson debuted in the ONE Championship Circle last year as part of the historic ONE atomweight grand prix. The American star faced Itsuki Hirata in the tournament’s opening round, and she slipped to a unanimous-decision loss. Though the result wasn’t what she hoped for, “Lil’ Savage” kept her mind focused, and now she’s preparing for her second outing on the global stage.

Anderson will face Asha Roka in an atomweight mixed martial arts bout at ONE 157: Petchmorakot vs. Vienot on Friday, May 20, at the Singapore Indoor Stadium, and she plans to go into what she calls “gangster mode” for her return bout. Despite the intimidating moniker, gangster mode is not a reference to becoming angry or violent. Instead, it’s a way of helping the 27-year-old martial artist overcome her anxiety and focus on the task at hand.

“Gangster mode started because, whenever my manager would call me for a fight, I would start crying,” Anderson said. “Like, even if it was such good news, it’s just the nerves and stuff. I immediately started crying.

“It was kind of like my parents and everyone just trying to change my morale to me not crying that I have to fight in like eight to ten weeks. They started calling it going into ‘gangster mode’, because I would take eight weeks off of work, pack my bags, go to a big camp, and while you’re in fight camp, you’re just fully dedicating every part of your life to that, no outside distractions.”

Being able to manage her nerves in this way has helped the American Top Team representative shut out the doubters who attempt to bring negativity into her preparation, and it has put her in the best position possible for her upcoming fight.

“Honestly, it’s mostly been not caring about what other people think so much and just listening to your body and listening to what you need,” Anderson said. “I’m just staying focused and staying in gangster mode and not letting people take you out of that by negative comments or saying, ‘You’re going to lose,’ or having a bad training session, and just focusing on what I can control has been the biggest thing.

“There’s so many things out of your control when you are a fighter. I have a 10-hour layover in Amsterdam on the way there, and complaining to my manager about that isn’t going to do anything. Maybe I’ll even take advantage of it and go outside and look at Amsterdam. I don’t know. I’m just trying to be more positive and focus on what I can control.”

Speaking out about her struggles with social anxiety has given the Michigan native a new perspective, and her openness has been immensely positive for both her and her fans.

“I have had so many people reach out to me saying that they had it too,” Anderson said. “They are sharing their experiences with me, which makes me feel like I can connect with more people. Because I think fighting is a super lonely sport. I don’t really hang out with anyone outside of the gym. It’s just me and my dog here, every night by ourselves.

“When you put on someone else’s shoes, they’re a person too. And I think people don’t see that when they see people on big platforms. I get anxious to go to the grocery store, because I feel people are laughing at me for buying groceries. It’s the stupidest thing ever, but it’s just something that happens.”

Since joining ONE, Anderson has been able to quit her day job and become a full-time athlete. That has helped her realize that the optimum way to hone her mindset and peak at the right time is not have to worry about external factors away from her camps.

“This is crazy because, now that I fight full time, it feels like I don’t get a break from gangster mode,” said Anderson. “But I’m just so grateful to be able to fight full-time and create my own schedule. I don’t have that extra stress of having to get the time off of work. So, even though I’m in gangster mode all the time now, it’s still a specific, probably, six-to-seven-weeks-out schedule.”

Anderson’s schedule will come to a head at ONE 157 when she returns to try and get back in the win column and make a run in the jam-packed atomweight division.