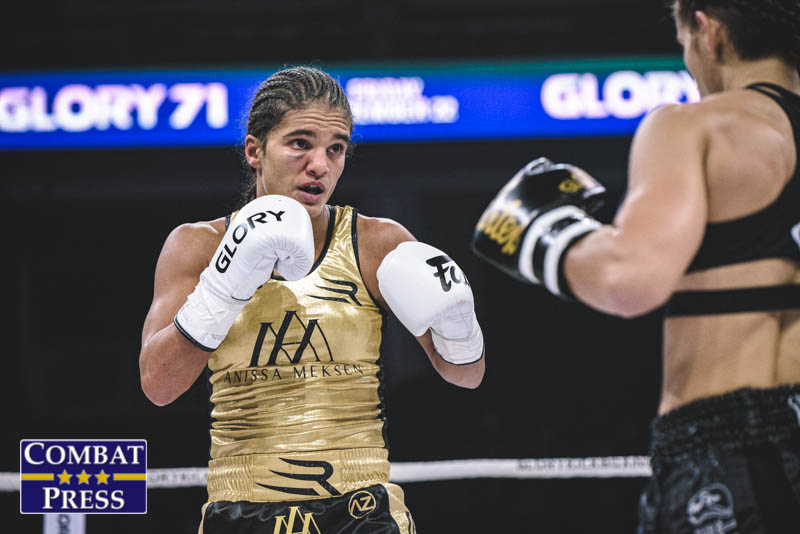 Anissa Meksen Back in Action Against Marie Ruumet on April 22

After what has been a bit of a painful waiting period for combat sports fans around the world, one of the best pound-for-pound kickboxers will finally be back in action on April 22. At ONE Championship: Eersel vs. Sadikovic, France’s Anissa Meksen, who is 101-5 as a pro kickboxer, will see the inside of the ONE Circle for the first time since Sep. 2021. Standing across the cage, in four-ounce gloves, will be Estonia’s Marie Ruumet, as the two will square off in a Muay Thai affair.

Meksen has a stack of gold that most dream of. The amazing striker has held multiple K-1 titles, in addition to ISKA, WAKO, and WBC World Muay Thai straps. Before joining ONE Championship last year, she had twice become the GLORY Kickboxing super bantamweight champ with several successful title defenses. Two of Meksen’s defeats came in her last seven fights, and both of them were attempted title defenses.

At GLORY 56 in Aug. 2018, Meksen came out on the wrong end of a split decision to Jady Menezes. However, she would go on to earn her title back at the rematch at GLORY 61 with a second-round TKO. After stringing together two more wins, including a split-decision win over prior opponent Tiffany van Soest, Meksen lost her title once again when van Soest bested her in their trilogy fight at GLORY 71 in Nov. 2019. Meksen bounced back with a win in her last GLORY fight, before moving over to ONE.

In her ONE debut at ONE Championship: Empower last September, the Frenchwoman knocked out Cristina Morales with a left hook in the second round, and has been on the bench ever since. However, as ONE has begun to ramp up the frequency of cards for 2022, there is plenty of time for Meksen to make her claim for a title shot.

The 22-year-old Ruumet is a bit of an unknown. And, as many know, it can be difficult to find the true records of Eastern European fighters. It appears form social media that she made her pro debut in 2017, but it’s hard to find an official record, and she would have only been 15 or 16 years old at the time. She stands at the same height as Meksen, and will be 11 years the younger, so it will be interesting to see what she brings to the table.

Fans have been chomping at the bit to see Meksen back in action, and she plans on making big waves in her sophomore ONE appearance. She has never looked past opponents in her 14-year professional kickboxing career, and fans should expect nothing less next Friday.