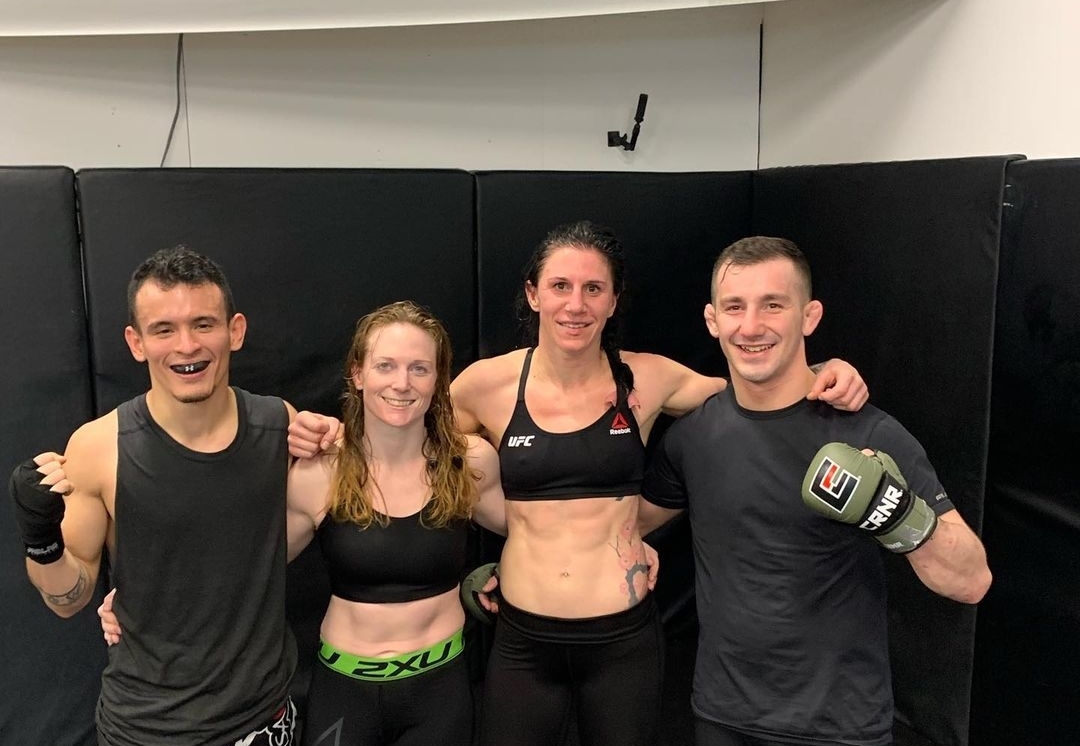 Five Women’s Flyweight Prospects the UFC Should Sign in 2022

Despite her last fight being at bantamweight, Brazil’s Gabriella Hermogenes has previously fought mostly at 125 pounds, and she is a big fighter for that weight class. With that in mind, she’s also a top flyweight that the UFC should take a look at in 2021.

The 28-year-old Kimura Team rep has spent most of her career fighting in South America, save for one big fight in Poland. She’s a well-rounded fighter that can strike and grapple, and, unlike a lot of Brazilian women, she has fought notable opponents as opposed to inexperienced counterparts. Half of her wins are by finish, including over formerly undefeated Katarzyna Biegajlo and veteran Iasmin Lucindo. Her lone win in 2021 came over fellow prospect Quelia Braga under the LFA banner when the company went to Brazil.

The women’s flyweight division is pretty tapped for talent between the UFC and Bellator, but Hermogenes stands out amongst the handful of prospects outside of those companies. Her ties to LFA definitely help her, as she’s already got some tape the UFC brass has likely seen.

If it weren’t for Jamey-Lyn Horth Wessels having to pull out of the 2020 Dana White’s Contender Series due to COVID travel restrictions, I believe she would be on the UFC roster right now. Instead, she’s still on the outside looking to score a contract in the near future.

Horth Wessels is a well-rounded fighter that has flown under the radar due to her inability to find consistent fights. That’s not on her. In fact, it’s mostly because not many women are stepping up to the plate. She has very good striking and showed this year that she can also grapple as well. In her lone 2021 fight, Horth Wessels struck gold with LFA, choking out fellow top prospect Mayra Cantuaria to capture the coveted LFA women’s flyweight championship.

Horth Wessels is just 31 years old right now, so she’s entering her prime. She’s also proven she’s UFC-ready by earning the LFA title and beating somebody as tough and skilled as Cantuaria. I have a good hunch she’ll be wearing UFC Venum gear in the coming months.

The UFC signed one killer female from Venezuela this year in Piera Rodriguez, who fought her way into the UFC with a Contender Series victory. There is another undefeated Venezuelan who the UFC should get their hands on in Carolina Jimenez, She could follow Rodriguez into the UFC in 2021.

Jimenez is mostly a grappler, though she does engage on the feet when needed. Four of her seven wins come by way of tapout, utilizing two rear-naked chokes, a guillotine choke and an armbar. Her only fight in 2021 saw her choke out Contender Series vet Lucrezia Ria, which was the biggest win of her career. She also shared the cage with UFC vet Kay Hansen for one round in an Invicta tournament bout back in 2019, but that loss shouldn’t do much given it was a one-round exhibition.

The downside is that Jimenez is 36 years old, meaning the time is ticking on her career. She’s not getting any younger, so her time to make it to the UFC needs to be now. She’s not the only one on this women’s flyweight list whose age may be an issue, but age is just a number. Jimenez is a solid prospect.

The lone Swede in the entire prospect series this year, Josefine Knutsson is the biggest dark horse in the series in any weight class. Entering 2021, she had zero pro MMA fights under her belt, but has quickly jumped onto scouts’ radars everywhere.

Knutsson has an extensive striking background, practicing Muay Thai for many years and taking numerous professional kickboxing bouts. She has shelved her kickboxing career to focus on MMA, and it’s paying off. She went 3-0 in 2021, in beating more experienced mixed martial artists. She debuted by besting Venator championship challenger Adriana Fusini. She followed that up by knocking out Elizabeth Rodrigues. Her most recent fight was her biggest win, scoring a dominant decision over TUF veteran Lanchana Green.

Knutsson may need a couple more wins to snag the attention of the UFC, and I understand that. She’s just 25, so she’s got plenty of time to improve and get even better than she already is. I hope the UFC will take a look at her this year and build her up slowly. She could be a contender some years down the road.

Karina Rodriguez is also 36 years old, and getting up there in age at this point in her career, but she continues to be one of the best flyweights outside the UFC. Not only that, she represents the market of Mexico, so she should clearly be somebody that UFC picks up this year.

Rodriguez is the Invicta title holder and has a long track record of taking on top competition. The well-rounded fighter has one fight in 2021, where she bested Daiana Torquato, but has shared the cage with the likes of UFC vet DeAnna Bennett (twice), former Invicta champ Vanessa Porto, UFC vet Milana Dudieva and current UFC roster member Poliana Botelho.

Rodriguez is the Invicta flyweight champion, which is more than enough of a credential to get her in the UFC. She also reps a coveted market like Mexico, which is even more attractive to the UFC brass. She should be more than a shoo-in to be on the UFC roster ASAP.