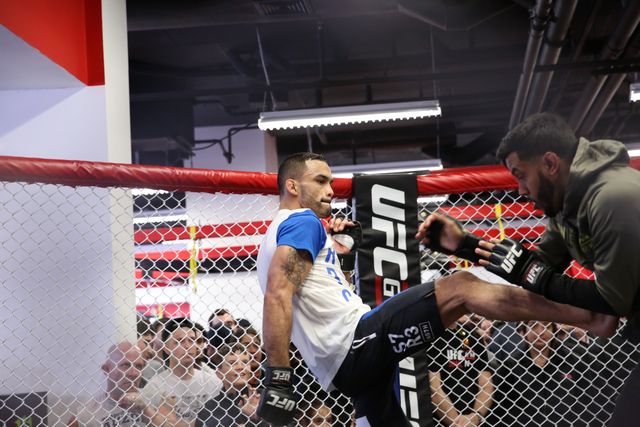 How Rob Font Will Be Another Kryptonite for Jose Aldo

After a rare week off by the UFC, the promotion will remain in Las Vegas for the remainder of the year. With just three events left for 2021, with two Fight Night events scheduled at the UFC Apex and UFC 269 at T-Mobile Arena. And, lucky for us, Rob Font vs. Jose Aldo is the first main event out of the three.

2021 was a year of big fights for the bantamweight division. Aljamain Sterling became the undisputed champion – whether you agree or not – against Petr Yan. T.J. Dillashaw’s return fight against Cory Sandhagen was one of the most competitive, yet exciting, fights of the year. And, Rob Font put on one of the more impressive performances of the year, when he dominated Cody Garbrandt for 25 minutes.

The performance against Garbrandt was one of the more surprising ones for many fans, despite close odds. Though Font was the higher ranked fighter going in, many expected “No Love” to continue his momentum towards earning another title shot, especially after his knockout win against Raphael Assuncao in his previous fight. But after 25 minutes, it was Font who had his hand raised after an assertive performance.

It has surely worn off by now, but the lingering excitement for Garbrandt after his Dominick Cruz fight was still around, even until just recently. Undoubtedly, it was a performance that warranted such expectations. But, it was rather surprising for those expectations to stick around for so long with his lack of success since his title win. Regardless, Font’s last win was, in a way, the most impressive win anyone has had against Garbrandt. The only true way that has been proven for the Team Alpha Male standout to lose in the past was getting drawn into firefights. All three of the losses up to that point came by knockout in the first two rounds.

Font fought the most calculated, and focused, Garbrandt we’ve ever seen, who clearly followed a game plan and remained collected. But, he never managed to build any momentum. What was truly impressive, and refreshing, was watching Font dominate the fight simply behind his jab. He walked down one of the more feared strikers in the division, behind one of the best jabs ever seen. It was evident that the consistency of Font’s jabs and pressure were causing a lot of discomfort for Garbrandt. In the end, it was judged as a flawless win for Font by two of three judges.

Jose Aldo will not be surprised by anything Font brings to the table. But, he will face something that has defeated him more than once before, which is 25 minutes. And not just any 25 minutes, but 25 minutes against non-stop, intelligent pressure. It could show similarities to the Holloway-Aldo fights, where pressure just breaks through after some time.

Font is also extremely self-aware in this match-up, and he understands the dangers he will be facing early, as he talked about earlier this week.

Though he believes it will take more, a win against Aldo could guarantee Font a title shot once the Sterling-Yan saga is settled. We have learned plenty of times in the past that anything can happen in this sport, and Font’s reception of a title shot, with a win over Aldo, would be far from the barmiest title shot earned.

UFC Fight Night: Font vs. Aldo airs in its entirety live on both ESPN+ and ESPN starting at 7 p.m. ET.