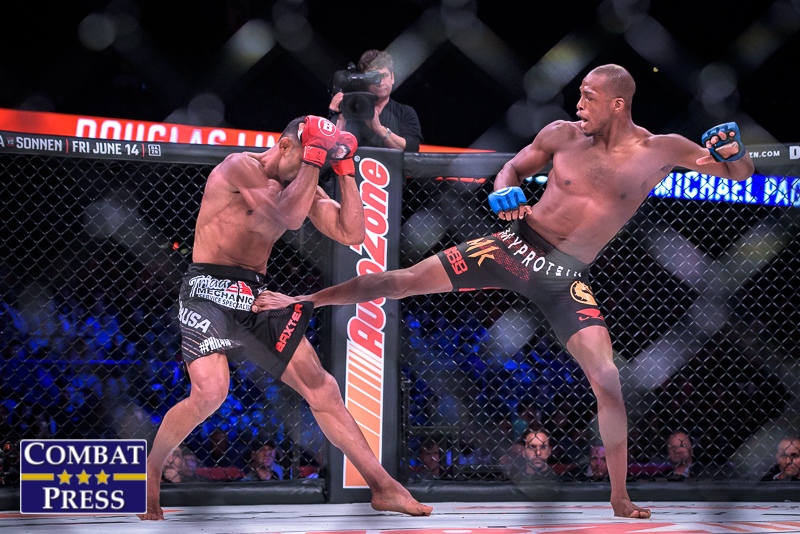 Bellator 267: Lima vs. MVP 2 goes down on Friday, Oct. 1, at the SSE Arena in London, England. Thirteen fights will be on the fight card with a variety of intriguing matchups. European fans are in for a treat with the adjusted start time.

In the headliner, Douglas Lima and Michael “Venom” Page face off in an intense rematch. The first time they fought, Lima brutally knocked out Page, giving him his first loss. Holding a record of 19-1, Page surely wants to get revenge for his only loss. On the contrary, Lima has lost two in a row and will do whatever it takes to get back in the win column.

The co-main event features rising star Leah McCourt taking on Jessica Borga. McCourt looks to advance her Bellator record to 5-0. Meanwhile, Borga has the chance to skyrocket her value with a win over McCourt. Also, Bellator 267 displays upcoming talent from around the world. Fighters from 14 different countries have the opportunity to make their countries proud. From top to bottom, Bellator 267 has the potential to be an explosive fight card filled with finishes.

Bellator 267 will showcase the prelims on YouTube, starting at 12:30 p.m. ET, which can be viewed by clicking on the picture above. The main card will kick off at 4 p.m. ET on Showtime. Let’s take a look at the preview and predictions.

The first time Douglas Lima and Michael “Venom” Page fought, Lima handed Page his first MMA loss. Does Page even the score this time around?

Lima and Page first fought in May 2019 in the welterweight tournament semi-finals. Lima landed a beautiful leg kick that dropped Page instantly. While trying to get up, Page got hit with a perfect uppercut that put him out cold. Lima went on to beat Rory MacDonald in the finals for the welterweight championship. Since then, fans and Page have pondered over what could have been, if Lima never won that fight. Luckily, Page has the chance to redeem himself and make an argument for deserving the next title shot.

Lima and Page have similar fighting styles, with creativity being a difference. Page is explosive and precise, leading to flashy finishes throughout his career. Meanwhile, Lima is powerful, but he tries to break down his opponent throughout the fight. The issue for Lima is that Page has continued to improve his patience. Page needs to control the pace and avoid the heavy leg kicks of Lima. On the contrary, Lima needs to keep Page on his back foot, limiting his offensive explosiveness and creativity. Page should be able to damage Lima early and come out with a finish.

Leah McCourt has won five straight fights since dropping her professional debut. Does she extend that winning streak to six with a victory over Jessica Borga?

McCourt has quietly become one of the fastest rising prospects in Bellator. Holding a promotional record of 4-0, McCourt has finished three of her four fights with Bellator. After getting her first win of the year back in May, McCourt is ready to keep the momentum rolling at Bellator 267. On the contrary, Borga looks to use McCourt to improve her value. At 31 years old, Borga holds a record of 3-3 with three finishes. Although beating McCourt is hard, Borga has the heart and fighting style to get the job done.
Borga relies heavily on her grappling to find success. The issue is that her takedowns mostly come from grinding clinch work. Anyone that has kept their distance has found success against Borga.

Meanwhile, McCourt has improved her striking to match her slick submissions. Although Borga is a talented fighter, her path to victory is hard to see in this fight. If the fight stays standing, McCourt should be able to overwhelm her with volume. If they go to the ground, McCourt’s submissions should keep her out of trouble. Overall, McCourt should be one step ahead of Borga and come out of Bellator 267 with a win.

Both Rob Whiteford and Andrew Fisher enter their showdown on the heels of winning four consecutive bouts. Which man makes it five in a row?

Rob Whiteford vs. Andrew Fisher showcases two fighters that have found success reinventing themselves later in their careers. Whiteford was once in the UFC, where he compiled a promotional record of 2-3. Since parting ways with the UFC, Whiteford has won four fights in a row, two by a finish. At 38 years old, Whiteford looks to win his second fight in Bellator to prove his worth.

Meanwhile, Fisher is on his second tenure with Bellator. He originally joined the promotion in 2013, where he went 0-2 before parting ways. After leaving Bellator, Fisher went 5-2 before taking a three-year layoff in 2017. Fisher eventually returned in October of last year with a win under the Bellator banner. He now has the opportunity to end Whiteford’s winning streak and extend his own. Although both fighters are supposed to be on the backend of their careers, the ability to keep winning will open up opportunities with Bellator.

The difference in this fight will be who can land a larger output. Both fighters are well-rounded, but Fisher tends to be more comfortable grappling. Meanwhile, Whiteford has heavy hands that tend to have him rely on striking. The main issue for Fisher is his low output. He continues to win fights but lacks the workload needed to dominate. Therefore, Whiteford’s more consistent workload and power should lead to a fifth straight win at Bellator 267.

The sleeper fight of Bellator 267 is the main card opener between Tim Wilde and Yves Landu.

Both fighters have unorthodox striking that leads to unpredictable finishes. At 35 years old, Landu holds a pro record of 16-8. He made his Bellator debut in October of last year and won by a first-round flying knee KO. Meanwhile, Wilde made his Bellator debut two years ago. After losing to Brent Primus, Wilde got his first Bellator win against Charlie Leary. Wilde and Landu now look to get a second win in a row to boost their value with Bellator.

Wilde has an awkward fighting style that tends to catch his opponents off guard. The key to success for his opponents has been to take him down and rack up control time. Although Landu does have solid submissions, he tends to keep the fight standing. Landu also tends to have unorthodox striking by using his athleticism to create opportunities. If they stay standing, the fans could be in for a wild fight where both fighters use their creativity to get the finish.