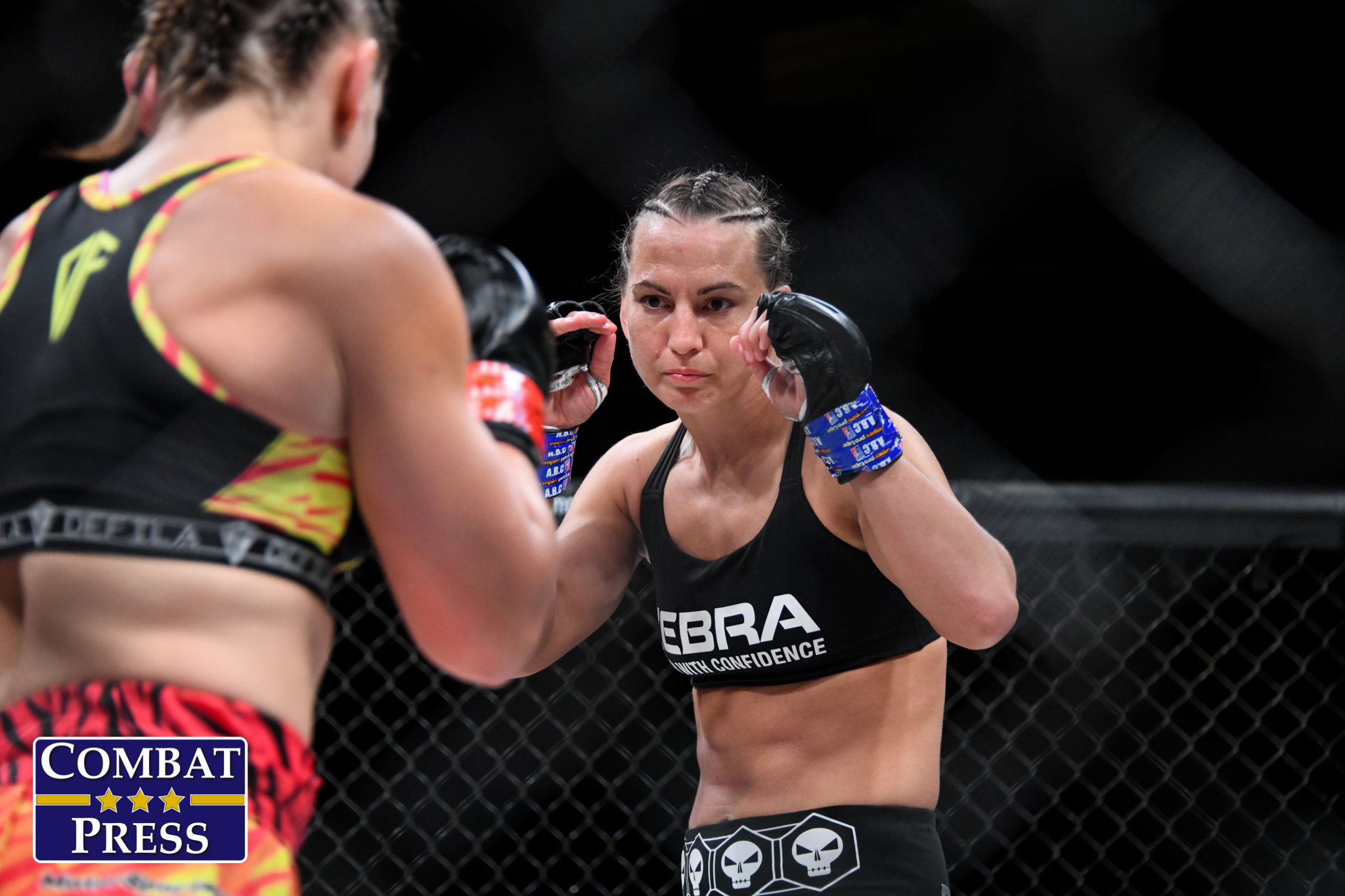 The third event of the 2021 Professional Fighters League campaign took place last Thursday and marked the start of the women’s lightweight season with five female bouts. We’ll look at the three fights that I previewed. In addition to those three bouts, we also saw wins for Larissa Pacheco, who scored a TKO of Julija Pajić in under a minute, and Genah Fabian, who notched a unanimous decision over Laura Sanchez.

This was my favorite fight of the night.

Kolesnyk clearly lost this one — the decision went to Guardado — but she showed some marked improvement with her ground game. As I said going in, her previous two fights had shown the path to victory against her. She lost by submission in round one to Pam Sorenson and in round two to Felicia Spencer. I won’t sugarcoat it, either: she looked really bad on the ground in those fights. She couldn’t defend the takedowns and did not know how to stop advances or how to really defend submissions. She also didn’t really know how to escape.

Guardado, whose time away from the cage might make her an unknown to a lot of today’s fans, has good takedowns and a very good ground game. I am not going to lie when I say I felt Guardado could get a submission win in this fight. In fact, I expected it. However, Kolesnyk really did better than I expected. She made Guardado work to get it to the mat. Once it was down, though, it was still Guardado mostly in control. Yet, Kolesnyk minimized damage, did better at knowing the things required to defend, worked on escapes, and overall just showed a lot of improvement. It was a loss for Kolesnyk, but there are things she can hang her hat on.

Listen, I said it before Guardado’s debut in Invicta in the Phoenix Series, and I said it again before this fight: she is very legit and will accomplish things. I really liked her ability to know when to do things in this outing. She knew when it was time to stop striking and move it to a clinch. She also knew the opportune time to go for the takedown and when to do certain things on the ground. Nothing was rushed here, and nothing was predictable. Guardado fought a fairly safe fight, but she still did so in an aggressive manner. She didn’t take any unnecessary risks, but that doesn’t mean she wasn’t fighting to finish.

Guardado didn’t get frustrated, either. We knew the game plan was takedowns, and I would suspect she expected an easier time of it on the ground. She was getting resistance from Kolesnyk, and while she probably got more of that than expected, she didn’t let it deter her. She kept pressing, kept sticking with what was working, and didn’t show any signs of frustration.

Pretty much everyone had the names of Kayla Harrison, Larissa Pacheco and Kaitlin Young as the top contenders. I am not saying Guardado is suddenly up there with them or anything like that, she is not to be slept on. On any given night, Guardado is going to give anyone a run for their money. She is the one person in this season’s field who I feel brings something to the table that can be a problem for the top contenders.

Young defeated Dandois via unanimous decision in a fight that was mostly what I expected it to be. Young used her superior striking to mostly coast to the decision. I’m not saying it was an easy fight, but just that Young was able to fight her fight and wasn’t in any serious trouble until a choke late in the third round.

It appears that the striking of Dandois will never be fluid or particularly technical. However, she does have some power in her punches. She needs to make the fight into more of a brawl so she can land her looping punches, but she was not able to do that here. Young’s stand-up is so good, which is a large reason for this. Young knew what Dandois needed to do and wasn’t going to allow it.

I wanted Dandois to try to lure Young to her. If she could get the clinch against the cage, then she would have chances to do things. We saw this late in the third when she got a tight guillotine on Young. However, beyond that one opportunity, Dandois was instead chasing Young while coming forward and trying to throw those punches. It wasn’t working, because she was chasing rather than cutting off the cage. This led to Dandois mostly walking into punches from Young. There were times when she would land a hard shot on Young, who no doubt felt it, but then could not follow up.

Young fought such a smart and tactical fight. She had great movement and footwork, and she did an excellent job of making Dandois come to her and walk into those strikes. When Dandois came in, Young would wait until Dandois had her hands up to block and then landed to the open spot. With how Dandois blocks her face, it takes an extra second to throw a punch. So, Young was out of there before Dandois could throw back.

Young also never allowed her back to get too close to the cage. Sometimes you’ll see a fighter want to avoid this spot, but they put themselves in a situation where they can be cut off and put on the cage. Young almost always kept herself at either a safe distance from the cage or a safe distance from Dandois to where Dandois wasn’t able to put her there.

For those who are hoping that Harrison does not win — there are some people who, for whatever reason, don’t seem to like her for reasons I struggle to understand — Young displayed a game plan that could give the Olympic judoka trouble. We know what Harrison wants to do. She wants to trap her opponent, take them down and then go to work. In this fight, Young did what needs to be done in order to beat Harrison. If Young moves like this and can keep Harrison off of her in a stand-up battle, then Young is going to be the better fighter.

Harrison scored a first-round TKo finish of Morais, and there’s really not much to say here. Harrison took her down and beat her up until the ref stepped in. It lasted just over a minute. Let’s talk a little bit about Harrison, though.

People on social media seemed to be saying this was an easy fight that was meant to protect Harrison. Morais is a good fighter. Is she a great fighter? No. But then, how many people are? Morais has won over some very good opposition.

At some point, we need to give Harrison credit. She has beaten Larissa Pacheco twice, and we saw what Pacheco is capable of earlier in the night. This field of competition is going to be much harder for her to top than the last one. If Harrison wins the season, then we really need to start talking about her with some more respect for her skills