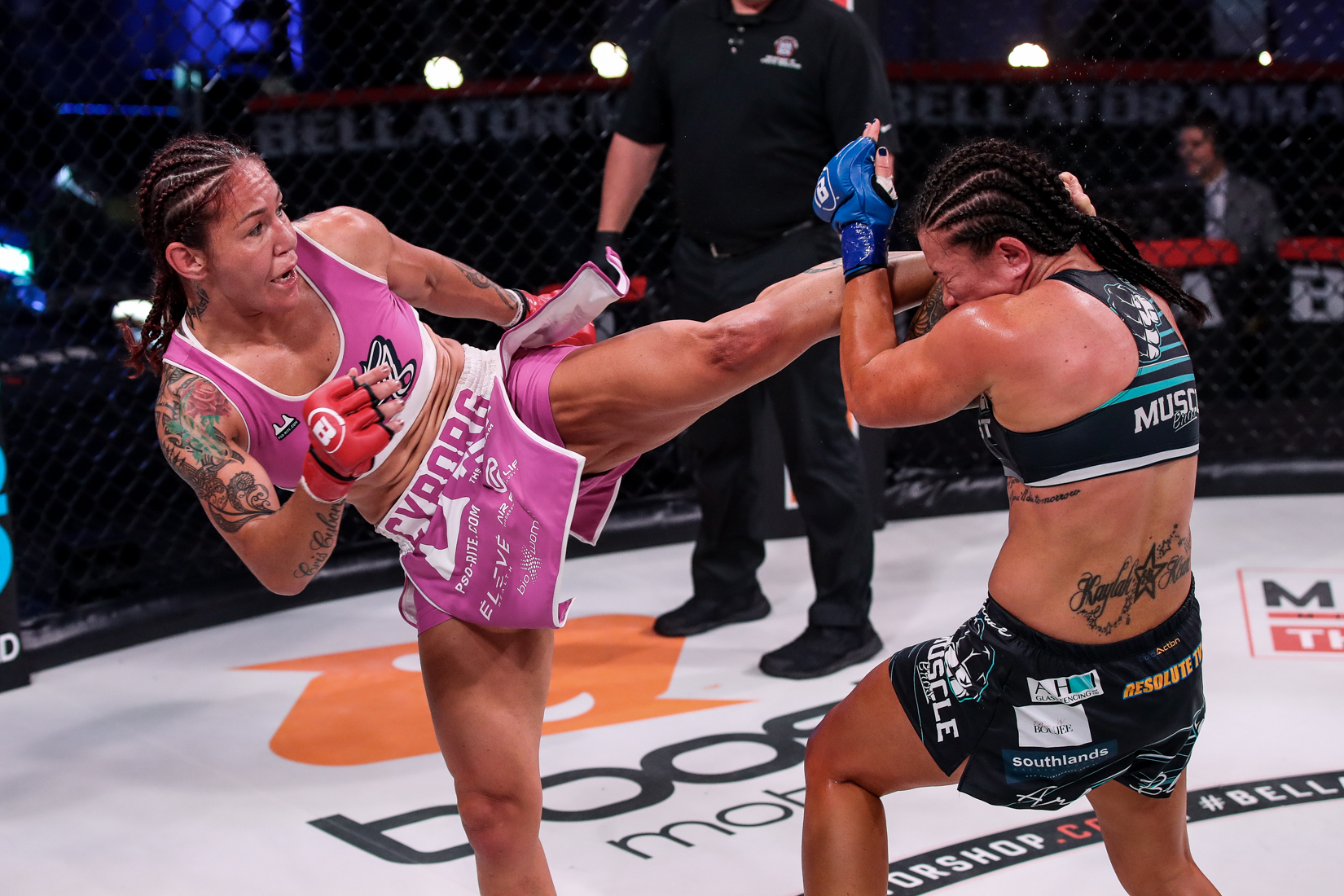 There have been the alarming videos surrounding her weight cuts. She also drew the ire of women’s MMA royalty for her one and only doping violation in 2012. However, something that no one can take away from Cris “Cyborg” Justino is the resilience and relentlessness she has time and time again exhibited. The four-time featherweight titleholder is a surefire pick for the Hall of Fame. Her dominance in the cage has produced 18 knockouts in 26 fights. If Cyborg’s dominance translates and continues against Leslie Smith at Bellator 259 on Friday, the Brazilian will add another feather to her cap.

With a win this weekend, Cyborg will be able to boast a combination of longevity and success that former stars like Rashad Evans and Chuck Liddell tried but failed to maintain. Bellator has been the home Cyborg has been searching for and will most likely be where she’ll
finish her days as a professional fighter. Cyborg needs two more successful title defenses with Bellator to match her career best of three that she set four years ago when she reigned over Invicta FC.

In the co-headliner, former bantamweight champion Darrion Caldwell returns to the division against Leandro Higo in a rematch after his quest for featherweight supremacy was derailed by AJ McKee Jr. in just 71 seconds at Bellator 253.

Three additional bouts round out the main card, featuring such notables as Christian Edwards, Jaleel Willis, Austin Vanderford and Fabian Edwards. The stacked nine-fight preliminary offering includes rising women’s featherweight contender Janay Harding and a long list of fighters looking to break through to the next level with Bellator.

Bellator 259 takes place at the Mohegan Sun Arena in Uncasville, Conn. The main card is scheduled for a 9 p.m. ET broadcast on Showtime. The prelims begin at 5:30 p.m. ET and can be seen online on Bellator MMA’s YouTube Channel.

The women’s featherweight championship bout between Cris “Cyborg” Justino and Leslie Smith is a rematch of a UFC 198 fight that lasted just 81 seconds and ended in a Smith loss. How different will the rematch look?

Smith, like Cyborg’s last opponent Arlene Blencowe, loves to stand and trade. This fighting style is synonymous to her like the superior combination of peanut butter and jelly in the sandwich realm. However, it is exactly what got her in trouble in this pair’s first encounter.

Smith opted to bang with one of the best strikers in women’s MMA, which is like willingly holding onto a lit firework. Smith has the tendency to throw a lot of looping punches, which for a fighter of Cyborg’s caliber will be very easy to react to, slip and counter. Smith also drops her head when she throws punch combinations, and this leaves her vulnerable to an uppercut or flying knee.

This is a situation where pride needs to take a back seat. The art of “being real” with oneself was sharply executed by Cody Garbrandt in his bantamweight title fight against Dominick Cruz at UFC 207, where he beat Cruz at his own game. If Smith didn’t think she has a legitimate chance at beating Cyborg this time around, there would be no logical reason to put the pen to paper. In a press conference in early April, she stated to reporters that distance and timing were two things that were missing in her first clash with Cyborg and that the maturity in those departments will make all the difference in the rematch.

This is easily the most important fight of Smith’s career since her headlining spot in 2013 when she fought for the belt against Barb Honchak at Invicta FC 7. For the outcome to go her way, Smith will need to employ her underrated and underutilized grappling skills. This was a game-changer when she fought an Amanda Bell that missed weight by four pounds at Bellator 245. Not only did Smith dominate top control with ground-and-pound, but she had Bell flattened out in the second round to attempt a rear-naked choke.

Sure, Cyborg is coming off the first submission win of her career when she submitted the aforementioned Blencowe in the same manner, but Smith should pick the less potent of the two poisons and see what happens on the mat. While this is near impossible with Cyborg’s strength, Smith has to keep the fight away from the cage, where Cyborg lands the most damage.

The co-headlining bantamweight clash between Darrion Caldwell and Leandro Higo is also a rematch. The first fight went Caldwell’s way via a first-round submission. Will he repeat his success here?

All it took for Caldwell to finish Higo at Bellator 195 two years ago was a guillotine choke just under three minutes into the first round. With the sequel bout on Friday scheduled to be at 145 pounds, it is hard not to see Caldwell winning again.

Outside of the loss to AJ McKee Jr., Caldwell has an unblemished 8-0-1 record in the featherweight division. With the extra pounds, it will be even more difficult for Higo to keep Caldwell off his back and avoid being mounted en route to a front or back choke submission.

Higo has a dangerous grappling background, though, where 12 of his 20 wins as a professional were submissions. The aforementioned first fight with Caldwell was the first and only time that Higo lost a fight via submission.

The huge storyline of this card is that there are eight undefeated prospects in the lineup. This includes a clash between two 5-0 fighters in Grant Neal and Tyree Fortune.

Fortune, who is the twin brother of fellow Bellator fighter Tyrell, will have a lot to prove. Ring rust could play a factor in his first action since 2019.

Neal is currently in medical school as he works toward a career as an orthopedic surgeon, but he has had a lot of success since turning into an MMA pro two years ago. Neal is an incredible athlete that wins fights in more devastating fashion than Tyree. With both of them coming from a wrestling background, it will be exciting to see what Neal’s incredible footwork will open up if and when the fight stays on the feet.

The other fight to circle is the showdown between Valerie Loureda and Hannah Guy in the women’s flyweight division. This is a dynamic striker-versus-grappler match-up. Guy relies on a grappling-heavy approach, whereas Loureda is an American Top Team member whose main base is taekwondo. The Korean martial art is known for its devastating kicks, and so it is refreshing and incredible to see the martial art being utilized at a high level by Loureda. Two of Guy’s three fights have been under the surveillance of the Mississippi-based Summit FC circuit, and this will serve as her Bellator debut.