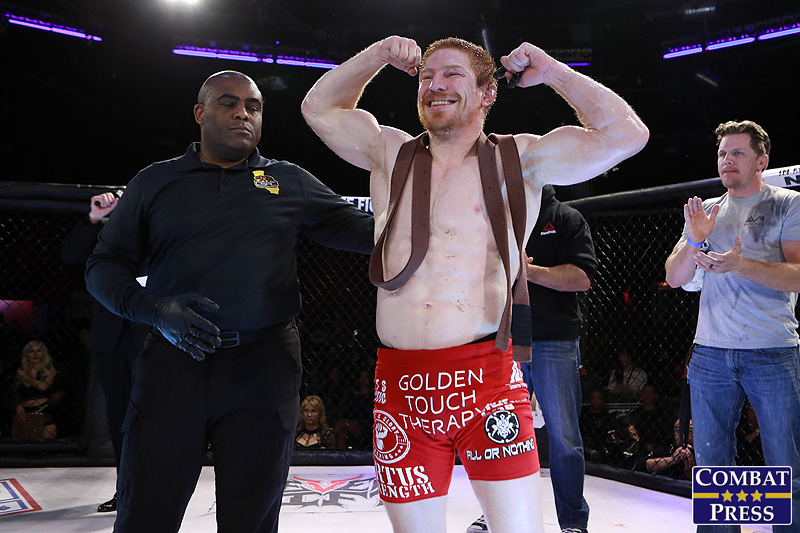 A sound mind and body are very important keys to personal growth and happiness. Regardless of how a person keeps their mentality focused on those two things — whether it’s through exercise, religion, outdoor activities, meditation, or something else — it benefits them to keep their attention centered on the positive.

Legacy Fighting Alliance lightweight Spike Carlyle is a very positive human being. The UFC veteran carries a strong work ethic and a strong faith in his religion. When the going gets tough, he does what he can to find the good in his learning experiences.

“I’m all about Jesus Christ and serving him, and to help others develop a personal, saving relationship with him,” Carlyle told Combat Press. “I always voiced that in the UFC, but I learned that sometimes you’ve got to be a little subtle with it. That was part of the learning experience. I need to know when to turn it up and when to maybe drink some water or something. Everybody’s a little different, but that’s part of the maturity process.”

Carlyle’s three-fight UFC stint went by in a flash, especially considering what else was going on in the world in 2020. He made his promotional debut on Feb. 29, 2020, with a first-round TKO of Aalon Cruz. The whole world locked down less than a month later. Then, as things opened back up, he dropped a hard-fought contest to Billy Quarantillo via unanimous decision in May. Another decision loss, this one to Bill Algeo, followed on Nov. 28.

Carlyle was subsequently released by the promotion. The 27-year-old, who went 8-1 prior to his time in the Octagon, could still find the bright side to the situation.

Carlyle, who used to fight out of The Treigning Lab, faced difficulties trying to train as a professional fighter in California once the COVID-19 pandemic set in. However, he shifted gears to accommodate his needs.

“The gym initially shut down for the first three months when it started last year,” Carlyle explained. “For my second UFC fight, I didn’t get to train with my head coach, because the gym was shut down. Then, about three to four months ago, something happened, and there were a couple positive cases. They ended up shutting the gym down for about five weeks. It was unfortunate, because if I had a fight coming up, I couldn’t be out of a gym for that time. I had to make a decision. I was already cross-training at Kings MMA Anaheim, and it all worked out.”

After his release from the UFC, Carlyle started working with coach Nolan Ticman, and UFC lightweight Beneil Dariush became one of his main training partners.

As the new year rolled around, the doors of opportunity started to open for Carlyle. He thought he was going to have a fight in February, but it never came to fruition. Then, on about three weeks’ notice, he landed a headlining gig on the LFA 103 card against Batsumberel Dagvadorj.

The last time Carlyle fought for the organization was at LFA 74 in 2019. He won that fight — also a short-notice affair — against Matthew Coquhoun via first-round knockout.

“I’m always training,” said Carlyle. “I was trying to fight in February, and that didn’t go through. So we were shooting for March or April anyway. It worked out perfectly. I think I do better [on short notice]. I’m always training, so it doesn’t matter to me. Not having an eight- or 12-week training camp is fine.”

Mongolia’s Dagvadorj, who trains out of Dragon House MMA in California, currently possesses a 7-1 mark as a pro. However, other than his last two fights — the first of which he won by bulldog choke at Bellator 226 and the second of which was an LFA 96 headliner that resulted in his first loss — “The Mongolian Falcon” has largely faced very inexperienced opponents.

“I believe he was on the Mongolian national wrestling team,” Carlyle stated. “I’m not too familiar with that, but I know he’s a southpaw wrestler.”

Carlyle isn’t too worried about his next opponent’s background. He is far more concerned with what he can do to impose his will in the cage.

“I go to [the King’s MMA flagship gym] in Huntington Beach for some sparring or to class once per week,” said the California native. “All I do is train. I don’t know if ‘sold out’ is the correct term, but I’m definitely dedicated to this career.”

Carlyle started his UFC campaign at the relatively young age of 26. To get bounced at age 27does not mean his hopes have come to an end. In fact, he’s arguably only getting started. A nice winning streak could land him right back to in the Octagon. The next step on the road back to the big show comes on Friday night in Shawnee, Okla., at LFA 103.