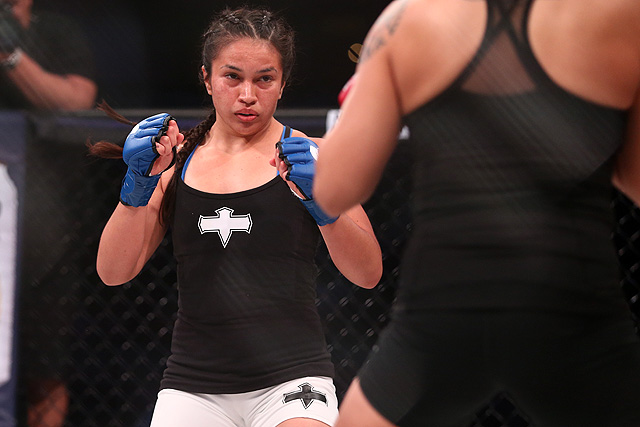 Titan Fighting Championship has scaled back its approach over the years. Once an organization with the ambition to become a competitor with the big leagues, the company has now settled into a much more realistic place as a high-level developmental league for talent on the way up and veterans seeking redemption. The Titan FC 59 welterweight championship match-up between Mike Graves and Yuri Villefort falls squarely into the latter category.

Graves should be a familiar name to fight fans thanks to his appearance on the 21st season of The Ultimate Fighter. That particular edition of the reality show pitted rival Florida gyms American Top Team and the Blackzilians against each other in what was an unorthodox and non-linear approach to the format. The season produced current UFC star Kamaru Usman, and it also served as a springboard to the UFC for Graves, who lost to Usman on the show. The 29-year-old added an exhibition win over Jason Jackson and then scored official UFC victories over Vicente Luque and Randy Brown. He fought to a draw with Bojan Velickovic at UFC 201 and was slated to meet Sergio Moraes before an arrest for domestic violence led to his release from the organization. After a winless stretch with Fight Nights Global in which he suffered a loss and fought to another draw, Graves joined Titan FC. He’s had a string of injuries hamper his progress, but the ATT fighter has scored decisions over Gregg Ellis and Jared Gooden.

Villefort has also had his own tastes of the big show. After debuting in 2009 and racking up six wins, he landed in Strikeforce, where he dropped a split decision to Quinn Mulhern. The UFC ultimately absorbed Strikeforce, and Villefort transitioned to the Octagon, where losses to Nah-shon Burrell and Sean Spencer sent him packing. His misfortune continued with setbacks against Chris Bennett and Adam Townsend. This put the Brazilian on a five-fight skid. In 2015, he finally rebounded and registered five straight wins. This caught the attention of the Professional Fighters League, which brought Villefort in for its inaugural 2018 season. Unfortunately, Villefort struggled. He dropped a decision to UFC veteran Rick Story and was submitted by João Zeferino, another former UFCer. He was set to appear at another PFL show, but the booking fell through and he again landed on the regional scene. Villefort’s most recent appearance ended in a knockout victory over Joey Munoz.

It should be noted that personal life choices were the only reason Graves was jettisoned from the UFC roster. Inside the cage, he was undefeated through three Octagon appearances with two wins in that stretch. He only lost to the extremely talented Usman, a future UFC champ, by majority decision. His loss and another draw came after his UFC release, and that whole rough stretch could potentially have to do with distractions outside of the cage. His two recent victories suggest that he’s refocused and ready to get back on track.

Villefort has his hands full here. The Brazilian has displayed a very low ceiling thus far in his career. Every UFC caliber talent he’s met — and even a couple who aren’t at that level — has handed him a loss. His biggest wins were first-round finishes of veteran fighters who never managed to catch a glimpse of the Octagon. The 28-year-old’s best bet is to come out swinging and hope something connects early.

If Villefort doesn’t land a lucky shot, he’s going to get dominated by Graves. The ATT fighter would arguably be a welterweight contender in the UFC by now if he hadn’t made poor life choices. He has the skills to school Villefort through three rounds en route to the decision victory.

Combate Americas just can’t seem to get enough of the Frausto sisters. The company’s 56th show was initially slated to feature both Zoila and Stephanie in separate bouts. However, Karla Benitez, Zoila’s scheduled opponent, was deemed ineligible to compete, therefore leaving Zoila without a fight. Stephanie will still appear on the card in a strawweight affair against up-and-comer Charisa Sigala.

Stephanie is the lesser known of the Frausto siblings. The 29-year-old has been plying her trade since 2010, but she has had a rocky road and sits just one victory above the .500 mark. “Macaquinha” went 2-1 out of the gates before joining Bellator MMA. She lasted just over two minutes before she was submitted by Lisa Ellis and found herself back on the regional circuit. She went just 1-2 in this stretch and suffered a loss to future Invicta Fighting Championships atomweight title challenger Ashley Cummins. Despite possessing a 3-4 mark at the time, Frausto was brought into the Invicta fold. She needed just 48 seconds to submit Amy Davis via a guillotine choke, but her success was brief. Just three months later, she was finished by Cassie Rodish. It turned out to be her last fight with Invicta and last appearance until 2015. While averaging just one fight per year from 2015 to 2017, Frausto managed another 2-1 stretch, though her defeat came in Bellator to Jaimee Nievera. After sitting out 2018 and most of 2019, she returned to action in November with Combate and scored a second-round knockout of Celine Haga.

The 35-year-old Sigala debuted in 2015 and recorded stoppages in her first four fights. After nearly two years of inactivity, she tried to return to action in 2018, but she was faced with some tough luck. A scheduled match-up with Kaiyana Rain fell through. Then, her scheduled Combate debut was scrapped when her opponent, Sheila Padilla, missed weight. She was rescheduled to debut at Combate 36 two months later, but then her opponent, Francis Hernandez, was bumped up to a co-headlining fight against Kyra Batara. Finally, Sigala made her Combate debut at the promotion’s 37th event, only to suffer a split-decision loss to Irene Cabello.

This fight presents an opportunity for Sigala to add a notable name to her resume. Her near win against Cabello suggests that she’s ready for a step up from her 2015-16 slate of competition that held just a 0-3 combined record. She still hasn’t beaten anyone with a previous pro victory, however, and that’s a concern, even against the inconsistent Frausto. Sigala does train with the UFC’s Tatiana Suarez and holds a brown belt in Brazilian Jiu-Jitsu, so it’s possible she has a trick or two up her sleeve.

Believe it or not, Frausto is actually experiencing the most prolonged success of her professional MMA career. After a 2-4 start, she’s now 5-2 over her last seven fights and 3-1 through her last four bouts. She’s no sure thing, but her experience and talent could be a bit too much for an opponent who typically has triumphed against the most inexperienced of fighters. If Frausto shows up on fight night — and that’s still a big if — she should find a knockout win over Sigala.

Fight Nights Global does not have a full event slated for this weekend, but it will put on a single title bout as part of a sports showcase at a festival event in Yekaterinburg. The championship affair takes place in the featherweight division, where the vacant belt will go to the winner of the showdown between Mukhamed Eminov and Aleksandr Grozin.

Eminov debuted in 2015 and rattled off 10 submission victories in a row. Overall, he stopped his first 12 opponents, mostly in the first frame. He finally went the distance at FNG 90, where he edged out Vladimir Egoyan in a majority verdict. He didn’t fare so well in his lone 2019 outing. This time, Eminov was on the wrong side of another majority decision when he lost to Nikita Mikhailov.

The 23-year-old Grozin also made his pro debut in 2015. It came under the FNG banner, but ended in a draw. The Ural Top Team fighter then reeled off seven straight wins. He ran into trouble in 2017 and lost consecutive fights to Viskhan Magomadov and Kanat Keldibekov. Grozin righted the ship in 2018 and is now on a six-fight winning streak while encountering the highest levels of competition he’s seen thus far. His current run includes a finish of Bellator veteran Diego Marlon and a decision over UFC castoff Rony Jason.

Eminov’s steamrolling of opponents mostly came to an end once he stopped fighting rookies and inexperienced fighters with losing records. He did score a doctor’s stoppage TKO over Zhuman Zhumabekov, but he barely eked out a nod over Egoyan and then lost to Mikhailov.

Grozin has displayed a much better track record against tough competition. In addition to his wins over Marlon and Jason, he has also notched a submission of 13-fight veteran (at the time) Eduard Muravitskiy and decisions over experienced fighters Evgeniy Prismakov, Ruslan Khisamutdinov, Svyatoslav Shabanov and Alexander Matmuratov. Granted, none of those names will register with most fans, but these guys held a combined 49-20-1 mark when they clashed with the Russian.

Eminov is a serious threat on the mat, especially early in the fight. However, his submission skills haven’t had the same effectiveness against more experienced competition. Grozin has had a strong run over the last two years and doesn’t seem like an easy win for Eminov. Grozin does tend to grind out victories more than his opponent, and he’ll likely add to his decision tally with a nod over Eminov to claim the FNG featherweight crown.