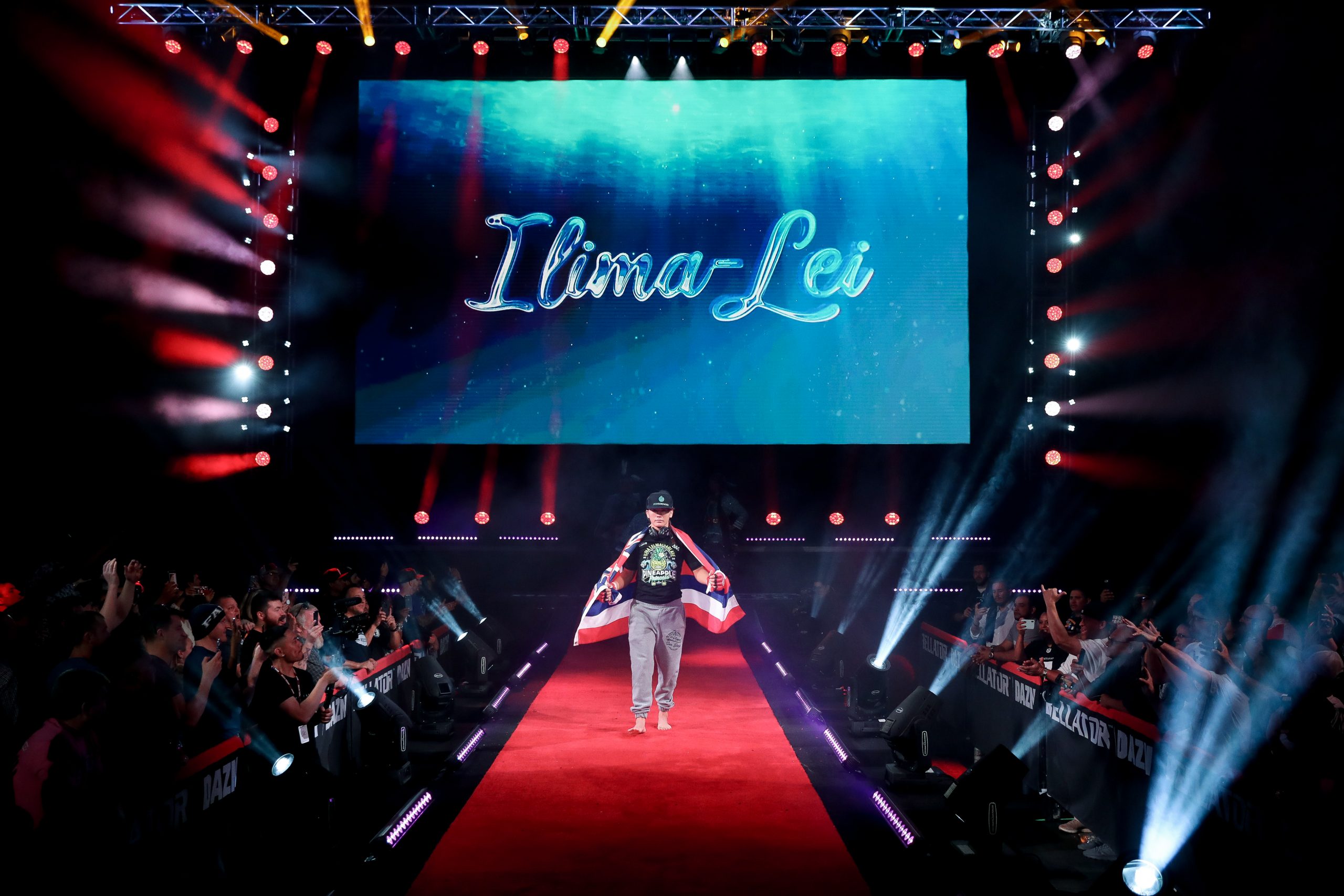 Bellator 236’s Ilima-Lei Macfarlane: Hope for the Best, Plan for the Worst

Professional athletes should always have a solid back-up plan. Sports careers don’t last forever. Whether it’s injury or age, there will always eventually be a time to hang it up. However, not playing the game does not mean someone can’t always be a part of it. Just ask 84-year-old Lee Corso.

Corso hasn’t put on cleats since 1956. He played football and baseball in high school. He was offered a contract with the Brooklyn Dodgers baseball team as a teenager. He set a school interception record as a Florida State football player. However, a career as a player was not his calling. Corso became a quarterbacks coach out of college, which turned into a coaching career that spanned nearly three decades. In his early 50s, he became a college-football analyst. Corso has been doing that particular job for the last 32 years.

Ilima-Lei Macfarlane, a native of Honolulu, may not be on a run in the sports world that exactly parallels Corso, but she’s been on a wild ride nonetheless. She walked into a gym six years ago as what she describes as a “fat college student” at San Diego State University who just wanted to lose some weight. Now, the Hawaiian sits undefeated as a mixed martial artist and Bellator MMA’s women’s flyweight champion.

“It’s been nuts,” Macfarlane told Combat Press. “It’s like every fight brings on something else. I just started doing commentary recently. I bought a house. I got a dog. It’s just all these life changes — and winning the belt. It’s cool. It’s fun.”

Macfarlane entered Bellator with a 1-0 record in August 2015. She won the belt just over two years later with a submission over Emily Ducote for the inaugural strap. Her pro record has stretched to 10-0 after three title defenses.

“I like where I’m at,” Macfarlane said. “I’m turning 30 in April, and I’m like, ‘That’s cool.’ I wanted to have my stuff together by the time I turned 30, so it’s cool. It’s a lot different from 25-year-old Ilima, who was running amuck and getting blackout drunk like three weeks before the fight.”

The “Pineapple Princess,” as Macfarlane has been affectionately coined on social media, may only be 29, but she has a ton of experience. With two knockouts and eight submissions in 10 fights, she has definitely learned how to keep the outcomes out of the judges’ hands. However, after her last fight against Veta Arteaga in April, she had a different type of educational experience.

“I learned after my last fight to not eat pork after weigh-ins,” Macfarlane admitted. “I totally did not refuel properly for that fight. I just went crazy. I don’t really eat pork to begin with, but, for some reason, I was like, ‘That pork dish looks great.’ I didn’t feel good the next day. I had a huge adrenaline dump. I hope for the best, but I prepare for the worst, so I was able to pull through and come out with the win even though I felt like shit.”

After her April bout, Macfarlane was able to add a new aspect to her career in MMA. She was asked to be a commentator for the Bellator 222 card in June. It was a great opportunity to try something new and also start working on her potential back-up plan.

“It’s awesome,” said Macfarlane. “It’s so much fun, but I hope I don’t get spoiled. The production side is so spoiled. They ask us if we want sushi or anything. We get transported in nice SUVs. I don’t forget my homies on the other side, but the production side is super awesome and fun. I hope they want to keep me on, because it was really cool and I Iove working up on the desk with the boys. It makes me want to do a better job at commentary.

“I think I’ve done good. I mean, I’ve heard positive feedback, and they asked me back again for The Forum coverage this past year. I’m like, ‘OK, they asked me back, so that means I must have done well.’ Maybe I’ll ask to commentate the upcoming Forum card in January, because it’s being headlined by women — Julia Budd and ‘Cyborg’ [Cristiane Justino].”

Macfarlane is alluding to Bellator 228, which took place at The Forum in Inglewood, Calif., and marked Macfarlane’s second event at the desk. However, only a week later, it was announced during the Bellator 229 broadcast that she would be defending her title again in December. That title defense is set for Saturday in Hawaii at Bellator 236. Macfarlane will be across the cage from England’s Kate Jackson.

Jackson, a former semi-finalist from The Ultimate Fighter 23, is currently on a two-fight winning streak in Bellator. She ended the undefeated run of Anastasia Yankova in May 2018 and followed up with a TKO of Lena Ovchynnikova in June. At 11-3-1, she is a soft-spoken killer.

Macfarlane asked the promotion why, and their response was that it was for promotional purposes. She figured perhaps the company was working on building her fan base in Britain.

“I went to the Bellator London card, and I saw Kate fight,” said the champ. “We got to talk afterwards. It was really cute. She was like, ‘I don’t think I’ll get a title fight, because I don’t talk the talk and I’m not on social media.’ She was a really lovely lady. Then, lo and behold, she’s the opponent I’m going to face.”

Jackson has a background in karate and judo. She also has a two-inch height advantage over Macfarlane. The reach is nearly identical.

“She’s well rounded everywhere,” Macfarlane admitted. “I don’t mean this in a bad way, but she’s the best fighter you’ve never heard of. In my eyes, she’s super underrated. A lot of people think, on paper, I should beat her, but I think she’s one of the most technically sound fighters in the division, and she’s definitely very experienced.”

This poses a tough match-up for Macfarlane, but she knows she is where she is for a reason. She plans on doing what it takes to get the job done. Macfarlane is preparing for a war.

“I use one new coach each camp,” Macfarlane explained. “They all are from [San Diego Combat Academy], but I’ll work specifically with one new coach to get different looks. For this camp, I actually started working with Landon Piercy, who is our Muay Thai coach, and he’s like the meanest motherfucker you will ever meet. That was really cool working with him and getting my Muay Thai game up. My head coach, Bill Crawford, changes up the camp every single time.”

The promotion’s first card in Hawaii was Bellator 213 almost exactly one year ago. It was only fitting that the “Pineapple Princess” headlined the show and submitted veteran Valérie Létourneau in the third round. It was a special night for the state of Hawaii. Macfarlane is hoping to keep the vibe going this weekend as the headliner of a two-night stop in her home state for the company.

Things could not be working out better for Macfarlane at this stage of her career. She is firing on all cylinders, cleaning out her division, and showing no signs of slowing down. However, in 2019, she also discovered a new passion in the broadcast booth. She has a long way to go to match Corso’s legendary analyst career, but it’s not a bad backup plan for when she finally does have to hang up the gloves.

“We have a shelf life as fighters,” Macfarlane said. “I’ve only been fighting for five years. I’m still always looking for Plan B — what I’m going to do afterwards. I know Josh Thomson has done it. Hopefully, Bellator wants to bring me in again.”

First, Macfarlane has a title defense to tend to. Her fight caps off a long weekend for Bellator. It goes down on Saturday night at Bellator 236, which airs exclusively on DAZN. She’s out to extend her winning streak to 11 fights. Only then can she turn her attention back to the broadcast booth.