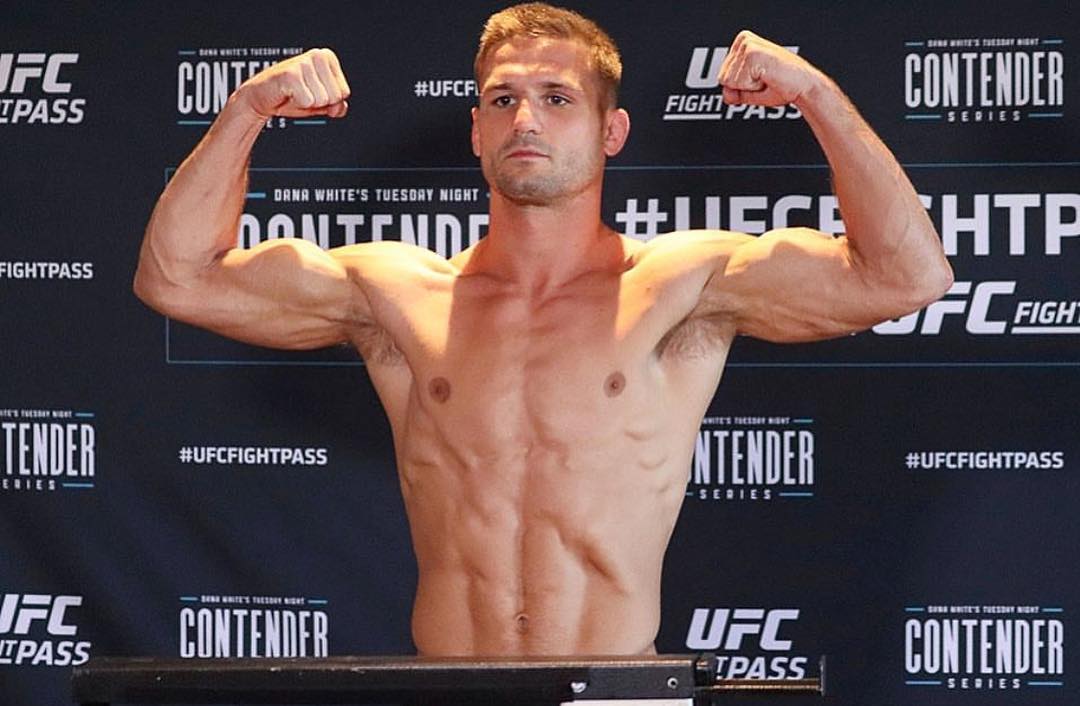 Poland’s other major promotion — KSW is undoubtedly the top dog right now — is back with its 26th show. Fight Exclusive Night puts its middleweight champion, Andrzej Grzebyk, in the spotlight for a title defense against Robert Fonseca.

The 28-year-old Grzebyk has had a strong career, beginning with his 2012 pro debut. He streaked out of the gates with four wins, but then lost two of his next three fights. He has bounced back to go 10-1 over his last 11 outings, and the one loss in this stretch came against current UFC fighter Alessio Di Chirico. The Legion Team Tarnów disciple has upped his level of competition through the years, but his most notable victories have come against largely unheralded veterans like Mindaugas Veržbickas, Marcin Naruszczka, Thiago Vieira, Vasily Novokov and Kamil Gniadek. The Polish kickboxer won the FEN middleweight crown with his third-round striking stoppage of Vieira. He later added the league’s welterweight title with a third-round knockout of Gniadek. This will be his first defense of either belt.

Fonseca has been bouncing around the MMA world since 2004, when he made his pro debut in a losing effort against Adriano Martins. The 36-year-old won six of his next seven, with the remaining bout ending in a no-contest. He suffered a 63-second knockout loss to Ary Santos in 2012 and only won one fight before tasting defeat yet again, this time via injury against Mario Schembri. The Ducks Team fighter has been perfect through five subsequent bouts, but those contests stretch over the span of six years.

Fonseca’s spotty MMA record is a result of his competing focus on Brazilian Jiu-Jitsu, where the Brazilian is a high-level black belt and world-class practitioner. As with many grapplers-turned-fighters, he has struggled to find consistency in his game. He was knocked out by a sub-.500 fighter, and he’s hardly won against anyone with a respectable record, though Sergio Souza and Michał Wiencek are exceptions. Overall, Fonseca has submitted six men and scored two knockouts.

The champ has eight knockouts to his credit. It also takes immense effort to get him to the mat, which is where Fonseca needs to take this fight if he wants any chance at a victory. As long as Grzebyk can stay vertical, he should be able to pick apart Fonseca with punches and kicks. The Brazilian has been dropped in the past, so a knockout win for Grzebyk is certainly not a reach.

Fight Nights Global has been rather quiet lately, but the Russian promotion is still up and running. The numbered events have been few and far between, with the last one coming in late April. The company has had one “Krepost Fight Club” show since then, but now it returns with its 94th event. The Moscow-based event features a bantamweight title showdown between Mukhamed Eminov and Evgeniy Ignatiev.

Eminev came out of the gates on fire. His first 12 fights ended in the first round, and all but one of these contests concluded with a submission finish. He rarely went beyond the two-minute mark in this series of outings. However, things changed when he collided with veteran Vladimir Egoyan, who took Eminev the distance in a majority decision. The Arkada product found even tougher times in his next fight when he emerged on the wrong side of another majority verdict, this time against Nikita Mikhailov.

The 24-year-old Ignatiev has had a strong start to his career as well. After a 1-1-1 start to his career in 2014-15, the “Grandmaster” went 8-0-1 over his next nine fights. Ignatiev ran into trouble when he met Alexander Matmuratov at FNG 81 and dropped a unanimous decision. He responded with victories in his two most recent affairs and was set to fight the aforementioned Mikhailov this weekend before Mikhailov withdrew with an injury. The young prospect has nine submission wins, but he’s been more prone to see the second round in his fights.

Both men’s struggles against tougher competition is notable. Eminev did most of his damage against rookies and fighters with three or fewer pro outings. Ignatiev’s biggest victories came against a set of opponents who hold respective records of 8-7, 5-3-2 and 5-2-1. Both men need a breakout performance.

Eminov tends to use his striking to set up takedowns. He often shoots from far outside, but he has found a lot of success with this method. On the mat, he can damage opponents with elbows from the top. If he’s on bottom, though, his game stagnates, as evidenced in his loss to Mikhailov. In contrast, Ignatiev is very content to let fights play out on the feet. He’s skilled at stuffing takedowns and countering with a two- or three-punch combination.

The outcome of this fight depends heavily on whether Eminov can find success with his takedown attempts. If he’s repeatedly stuffed, he’ll end up eating big shots on his way out. Eventually, he may even pull guard off of stuffed takedown attempts, which would be a huge error on his part. If Ignatiev can control where this contest takes place, the decision nod will be his for the taking.

Our third title fight brings us to the shores of Hawaii, where Trinity Combat Sports is set to hold the eighth event in its Trinity Kings series. While the show lacks overall depth, it features a very intriguing lightweight championship headliner between Troy Lamson and undefeated upstart Alex Munoz that appears to be the centerpiece for a visit from UFC President Dana White for his Lookin’ for a Fight series.

Lamson, 27, posted a perfect amateur mark before shifting to the pro ranks in late 2014. “Pretty Boy” continued his winning ways with six straight victories. He was continually increasing his level of competition, but this eventually led to back-to-back losses to Bellator veteran Justin Jaynes and World Series of Fighting vet Nick Browne. Lamson took a slight step back and found his groove, leading to his current seven-fight winning streak. He now boasts wins over the UFC’s Kyle Prepolec and Legacy Fighting Alliance veteran Robert Hale. The Hard Knocks 365 disciple has a wrestling base. He has tallied six submissions and four knockouts in his 15-fight career.

Texan-born California resident Munoz has been fighting professionally since 2015, but it was his 2018 win on Dana White’s Tuesday Night Contender Series that put his name on the map. The 29-year-old managed to decision star fighter Nick Newell on the show. It was his first fight since 2016, but the prospect handled himself well against a tough striker with a deadly arsenal of submissions. Munoz, Team Alpha Male’s wrestling coach, was able to utilize his wrestling to plant Newell on the canvas, and he also scored with some big punches. It was a significant step up for a man whose best previous opponent was the 4-1 Matheus Ubirajara.

This is another fight that could turn into an all-out war. Lamson has been submitted and decisioned, but he’s also delivered plenty of finishes himself. He has a strong submission game, too. Unfortunately for him, Munoz has proven to have excellent submission defense. The 30-27 scores for Munoz against Newell don’t tell the whole story, as Munoz still had to fend off chokes from his counterpart in that affair. Lamson’s facing an uphill battle to gain White’s attention.

Munoz demonstrated his savvy against a tough veteran, which makes him hard to ignore. If Lamson couldn’t get past mid-tier fighters like Jaynes and Browne, it’s difficult to envision a victory for him over the wrestling coach of one of the world’s most renowned fight camps. Munoz probably won’t find a finish, but he’ll make it through a grueling fight and come out on the other side with gold in his hands… and maybe even a UFC contract to sign.