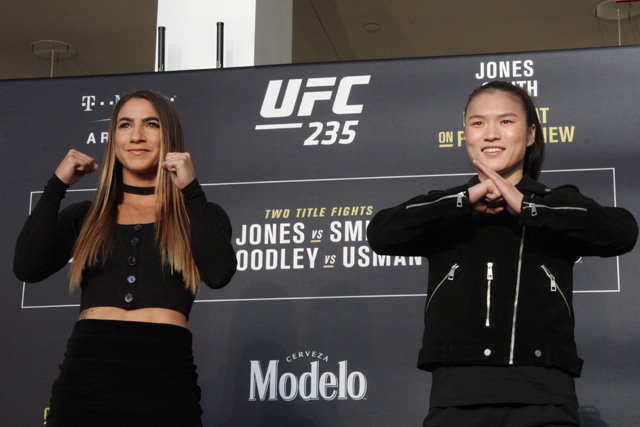 Dropped from the rankings: Leslie Smith (10)

A new Invicta champion was crowned in August. Pam Sorenson joins the top 10 after she was able to score a decision win over longtime veteran Kaitlin Young at Invicta FC 36. With the win, Sorenson clinched gold and shot her stock through the roof. Cristiane “Cyborg” Justino didn’t fight in the month of August, but she did become a free agent. The former UFC champion inked a new contract to become part of Bellator’s roster.

There were no top-10 bantamweights in action in August, but there was some big news. Former title challenger Cat Zingano has departed the UFC. In September, Lina Länsberg takes on the surging Macy Chiasson at UFC on ESPN+ 18.

Valentina Shevchenko continued to cement herself as the best 125-pounder in the world. The UFC champ successfully staved off a challenge from Liz Carmouche at UFC on ESPN+ 14. In September, Andrea Lee, our No. 8-ranked flyweight, takes on Joanne Calderwood at UFC 242 in an attempt to crack the top-five.

The MMA world was shocked again, as the UFC strawweight title hot potato continued. AT UFC on ESPN+ 15, Weili Zhang quickly dispatched of Jessica Andrade to claim the crown. This wasn’t the only shuffling to happen within the 115-pound ranks. Earlier in the month at UFC on ESPN+ 14, Marina Rodriguez scored an impressive victory over Tecia Torres. Rodriguez jumps into the rankings at No. 9, therefore bumping Torres and Alexa Grasso out of the top 10. In September, Grasso gets a chance to claw her way back up the poll when she fights Carla Esparza at UFC on ESPN+ 17.

The best atomweight in the world won yet again in August, as Ayaka Hamasaki submitted Suwanan Boonsorn at Rizin 18. The month also brought on plenty of shakeups within the division. Kanna Asakura re-emerges in the top-10 after edging Alesha Zappitella via split decision at the Rizin show. Meanwhile, Jessica Delboni lands at No. 9 after taking a split nod over the formidable Lindsey VanZandt at Invicta FC 36. The new additions to the top 10 force Miyuu Yamamoto and Mina Kurobe out of the rankings.