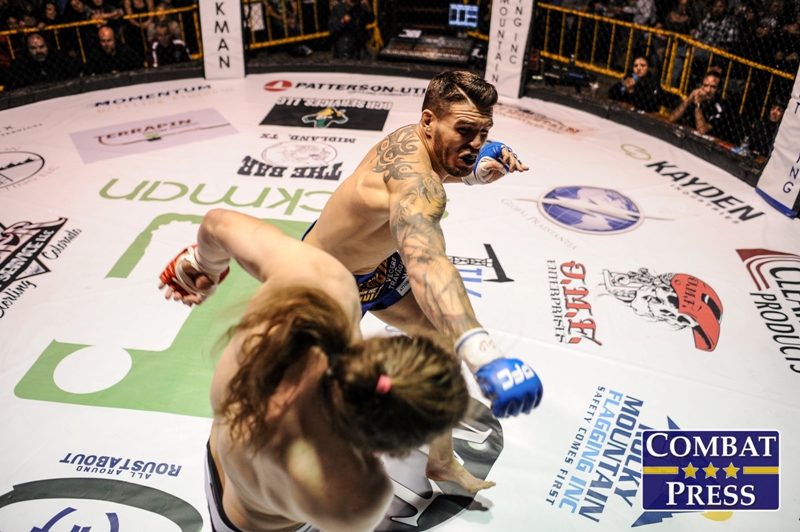 “The grind.” “Living the dream.” “I love my job.” As great as these clichés sound, even the happiest among us just need a break sometimes. Even the best, most seasoned professional in any career can hit times of burn-out. No matter how much someone loves their career, time off can be one of the most valuable resources toward a better future.

MMA veteran Chris Camozzi is only 32 years old. He has likely still not hit his prime, but he was 37 fights into his pro career and things had appeared to be on a downward slide already. After his first three years in the UFC, he was 19-5 as a pro and 6-2 in the promotion. In the following four years, he went 5-8 and was subsequently released by the company after his loss to Trevor Smith almost two years ago. Since then, he has had one MMA fight against Thiago Silva fall through last summer and compiled an impressive 3-1 run in GLORY Kickboxing over just 11 months.

Camozzi’s MMA record does contain a lot of asterisks. Two of his losses were short-notice fights against one of the best jiu-jitsu players to ever grace MMA — Ronaldo “Jacare” Souza — two of them were split decisions, and the others were mostly decision losses to wrestlers. There are really two themes here: Camozzi has not fared well against grapplers, and his weight cuts were getting worse and worse.

“I had a couple fights at middleweight for GLORY, and that was at 187 pounds, a little higher than 185,” Camozzi told Combat Press. “I was just killing myself. I had a hell of a time just hitting 187. My body was stopping at 190. I think, just cutting weight over the years — I’ve been doing it so long — it was starting to get brutal. Not that the cuts have ever been easy. All of my UFC ones, I thought I was going to die. It just got worse as I got older. I decided to go up and fight at more of my natural weight. I haven’t fought MMA at 205 since the beginning of my career. With GLORY, fighting at light heavyweight, I would just wake up, walk down, and get on the scale.”

Camozzi made his light heavyweight kickboxing debut at GLORY 56 in his hometown of Denver in August 2018. He finished John King by TKO in the second round. At GLORY 61 in November, he took on seasoned kickboxing veteran Myron Dennis and claimed the win by unanimous decision. After finding success at the heavier weight, and seeing teammates like UFC light heavyweight title challenger Anthony Smith find success in moving up as well, Camozzi decided it was finally time to make his foray back into the MMA cage as a 205-pound fighter.

“I think the time away was really good, because it has made me super hungry to get back,” Camozzi said. “I wouldn’t say that I was burnt out on MMA or anything. It just got repetitive for me. I was frustrated with certain things, so taking a step back and doing kickboxing for a year really helped me and made me put a lot of things into perspective, MMA-wise. My footwork has gotten a lot better. My striking is sharper. I just got better overall.”

One of the biggest aspects of the game that Camozzi has been focused on is his wrestling. He always knew that was his weak spot, but going in and out of fight camps time and time again never allowed him enough breathing room to focus on the one thing he needed to work on the most. After spending a lot of time working takedowns and defenses, he will finally have a chance to showcase his new skills on Saturday night at ACA 93 in St. Petersburg, Russia. His opponent, Muslim Magomedov, has only four pro fights.

“I don’t think it’s a gimme fight or anything,” Camozzi said. “You never know with the Russians, because he might be 4-0 on paper, but he might have 30 fights for all I know. There is not a lot of information on those guys. They are tough to find, and they have some killers you’ve never heard of. For me, to take him lightly would be stupid. There are so many good guys in Russia and Eastern Europe that have these crazy records, and you’ve never even heard of them. So, I’ve definitely seen a few fights from him. He’s a former wrestler, which has always been a problem for me in the past, so I’m super excited about it, because my entire time away from MMA and kickboxing, I’ve been working wrestling.”

Camozzi has some fantastic wrestlers who he has trained with for years, but his time outside of the cage has really allowed him to own that aspect of his craft.

“I’m going to practice now, and I’m not getting taken down by anybody,” Camozzi explained. “My defense has gotten 10 times better, and so has my offense. Guys who use to take me down all the time, I’m reversing it on them, taking them down [and] shutting it down. I feel great. I’m excited. I’m actually happy that I’m fighting a wrestler, because that was always my struggle before.

“I would say he’s a lot like [my former opponent] Bruno Santos, actually. He’s not super active. He’s just looking for the takedown, from what I see. That makes it a difficult fight, because guys like that are just waiting for you to overcommit on a strike so they can get in on a takedown. I’ve got to be patient, pick my shots, and make him come to me a little bit. He likes to back up to the cage, and almost, like, runs away. He frustrates guys with that, and they overcommit. Once they overcommit, they get out of position, and they get taken down.”

Camozzi’s excitement level for this fight is more than just about getting back into the MMA cage. He is the type of person who likes to meet his struggles head-on, and this will be a great test for him. He takes on a guy who appears to be a wrestling specialist, which is not unusual for a lot of Russian fighters. Magomedov is a 24-year-old sambo practitioner with a slight disadvantage in size, which may easily lead to a wrestling-heavy strategy against a far superior striker like Camozzi. That being said, Camozzi feels well prepared from his own camp at Factory X Muay Thai.

“I spar with Ian Heinisch a lot, and I would say he’s a better wrestler than the guy I’m fighting,” said Camozzi. “I used to struggle with Ian a lot, and he could take me down at will. Now, he’s not taking me down. He’s having a hell of a time. The few times this camp [when] I have been taken down, I’ve been working a lot on getting up [and] just creating scrambles. I had an epiphany in my career where I was just thinking about stuff to much. Now, I’m not thinking about anything, and I’m just saying ‘fuck it,’ and I go for it. It seems to be paying off.”

Sometimes, even the best professionals can hit a wall. What now appears to be a blessing in disguise, Camozzi’s time away from MMA has led him to a new lease on life as a light heavyweight fighter. He has already proven it can pay off in the kickboxing cage, and now he has a chance to prove the same to MMA fans.