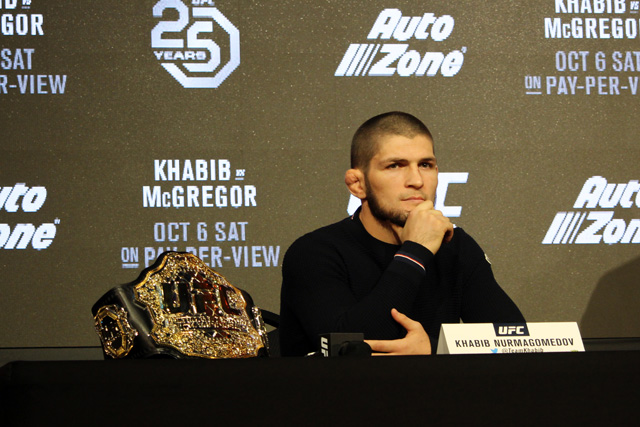 How is the NSAC Allowed to Continue Holding Khabib Nurmagomedov’s UFC 229 Fight Purse?

More than two weeks have passed since Khabib Nurmagomedov leapt over the cage to attack Dillon Danis, one of Conor McGregor’s teammates, and in doing so incited a brawl outside the cage while his cornermen attacked McGregor inside the cage. What started out as an amazing night of fights, capped by an incredible championship bout between Nurmagomedov and McGregor, quickly descended into madness unlike anything the UFC has ever seen — at an actual event, anyway.

In the fallout of this unprecedented situation, another dark cloud looms overhead with no apparent signs of clearing up any time soon. The Nevada State Athletic Commission has fined many UFC fighters over the years, mainly for substance abuse, but never in the history of the UFC has the commission simply held a fighter’s pay hostage, nor has the threat of a possible $2 million fine ever been discussed. In fact, it is an incredibly rare situation that a UFC payout would even be this high.

So, what gives the NSAC the authority to make such a drastic decision and leave a fighter to hang in the balance while it attempts to figure it all out?

Combat Press went to the Nevada State Athletic Commission in hopes that the ruling body would provide some clarity on the situation. While the NSAC refused to comment, it was gracious enough to provide official copies of the individual UFC 229 bout agreements for McGregor and Nurmagomedov. After carefully reviewing the fine print and cross-referencing the legalese jargon with the regulations, we can see the extent of unchecked power the NSAC is capable of wielding over combat-sports athletes in the state of Nevada.

Let’s start with section eight of the bout agreement, entitled “Breaches of this Agreement.” The last bullet, (d), states that “if the Commission shall decide that the contestant, manager, promoter, or any of them is guilty of an act detrimental to the interest of unarmed combat or is guilty of violating any provision of NRS/NAC Chapter 467, it constitutes a breach of this agreement.”

In section nine, “Agreements in the event of a Breach,” the contract goes on to say that “if the parties agree that if the Commission or its Executive Director determines that the possibility of a breach exists, as set forth in section 8 of this agreement, the Commission of its Executive Director, in their discretion, may order that the Promoter or any person holding the compensation, to pay the Compensation directly to the Commission. The parties hereby waive any right or claim to a hearing on this matter.”

A quick look at the official bout agreements for both Nurmagomedov and McGregor show that both fighters initialed to signal their agreement to these terms.

Sections eight and nine are upheld in accordance with NRS/NAC Chapter 467. So, the burning question is, what does that regulation say about the amount the Commission is permitted to fine the combatant? For brevity, only the applicable regulatory language has been included:

NRS 467.135  Order to promoter to withhold part of purse or other money due certain contestants or manager or second; hearing; disposition of money.

In other words, the NSAC is able to withhold part or all money based on the provisions of NRS 467.110. Which is what exactly?

NRS 467.110  Suspension, revocation and other disciplining of contestant and other participants; grounds for refusal to issue license.

1.  The Commission may suspend or revoke the license of, otherwise discipline, or take any combination of such actions against any contestant, promoter, ring official or other participant who, in the judgment of the Commission: (e) Is guilty of an act or conduct that is detrimental to a contest or exhibition of unarmed combat, including, but not limited to, any foul or unsportsmanlike conduct in connection with a contest or exhibition of unarmed combat.

In plain English, the regulation, which is enforced by a signed bout agreement, states the Commission is well within its rights to withhold pay or administer discipline, such as a fine, revocation or suspension of a license, if Nurmagomedov or his cornermen committed unsportsmanlike conduct in connection with a contest. Are they guilty of this? Absolutely! Is McGregor complicit in some way? Perhaps. Hopefully the Commission will provide clarification soon.

Finally, what does the regulation say about the amount of the fine the Commission is allowed to impose? A trip further down the rabbit hole almost gives us a clear answer. No one will know for sure until the Nevada State Athletic Commission has a hearing on the matter later this week in Las Vegas. In the meantime, here’s what the black-and- white print says about fines, once more with only the applicable language included for brevity:

NRS 467.158  Penalties in lieu of or in addition to other disciplinary action; payment of costs of proceedings.

(b) The occurrence of a contest or an exhibition of unarmed combat; or

(c) Any other action taken in conjunction with a contest or an exhibition of unarmed combat,

the Commission may prescribe a penalty pursuant to subsection 3.

3.  A penalty prescribed by the Commission pursuant to subsection 2:

(a) Must not exceed $250,000 or 100 percent of the share of the purse to which the holder of the license is entitled for the contest or exhibition, whichever amount is greater.

“Whichever amount is greater.” This sounds as if the NSAC is authorized to administer a fine of the entire purse. After all, after taking a deep dive into the contracts and the regulations, it is clear that subsection three of NRS 467.158 is applicable to this situation.

Combat Press will be on the ground providing coverage in real time when the Commission holds its hearing on Wednesday, Oct. 24. Stay tuned for updates as the story develops.