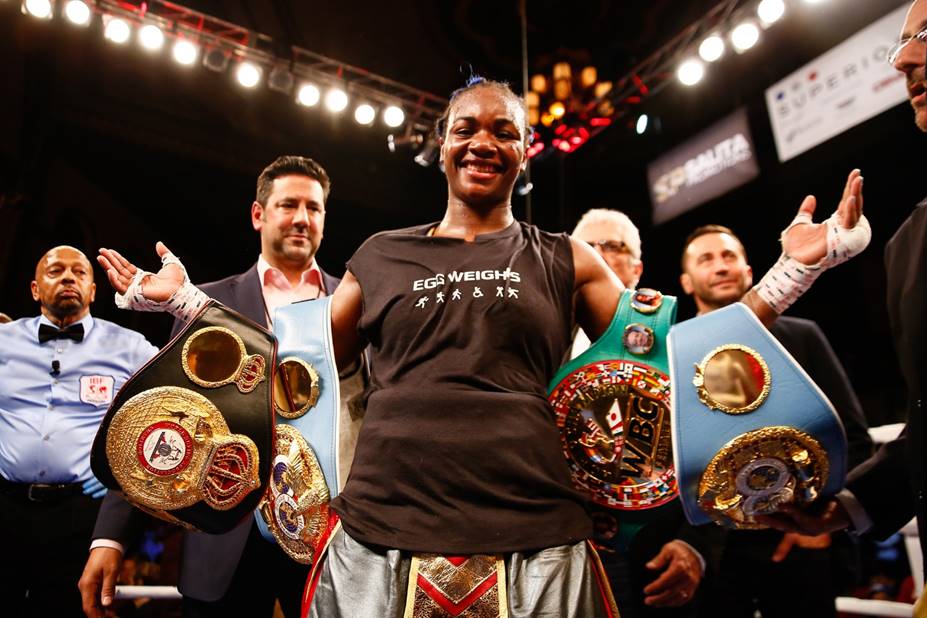 Claressa Shields: The Takeaway from the Hanna Gabriels Fight

On Friday, June 29, we got to see Claressa Shields tested as a professional. The two-time Olympic gold medalist boxer had yet to really face any adversity in her fights. In most cases, she was the better athlete and the more multi-dimensional boxer. Her fights told us very little about Shields as a fighter. Friday night did.

When she has all the advantages, Shields can win and do so handily. This means nothing, because everyone thrives in circumstances where they hold all the cards. Shields was able to win her first five pro fights, including two by stoppage. Along the way, she claimed five titles spanning the middleweight and super middleweight divisions across the NABF, WBC, IBF and WBAN organizations. On June 29, she stepped up to fight for the vacant WBA and IBF female middleweight titles.

In Hanna Gabriels, Shields was facing an accomplished, experienced, skilled, seasoned and strategic fighter. For the first time, Shields struggled to win rounds, lost some rounds and had to make adjustments to find success and build on those moments.

Let’s take a look at the fight and what it tells us about Shields in a potential fight against WBC and WBO champion Christina Hammer.

Shields doesn’t seem to have a real idea how to handle someone who boxes her. She has faced women who have a boxing background and had some degree of success as boxers. However, the large majority of women Shields has faced were looking to bring it to her, load up on single shots in hopes of getting a big return, or look to survive and use their durability and grit to carry the day. Gabriels, on the other hand, could come forward, but she also has the ability to move around the cage, pivot, and enter and exit on angles. Gabriels has a clear idea of how to manage distance in regards to closing, maintaining and increasing distance.

So, when Shields was facing an opponent who wasn’t loading up, who mixed up her shots, who used feints, who used deft footwork and was defensively responsible, she looked less than stellar. Shields pressured, but she wasn’t able to consistently cut off the cage. She missed often as she punched her way into range instead of working her way in and then punching. Shields was following Gabriels and throwing punches instead of cutting off the ring and getting in position before throwing punches.

This could be problematic for Shields against Hammer, who is a very mobile, technical, defensive and cautious fighter. Hammer is capable of navigating distance, pivoting, circling, feinting and using angles. If Shields has not made some headway in regards to generating efficient pressure and cutting the ring off, then she will be out-positioned and outboxed in a fashion similar to what Gabriels did against her.

There is a difference between Gabriels and Hammer, though. Gabriels seems to be the more athletic boxer and has a more creative, looser, non-classical style that allows for breaks in rhythm, more options defensively and an unorthodox approach. Hammer is a much more classical boxer in terms of how, when and why she moves defensively. Hammer is very predictable and limited in how she attacks, which instantly makes her easier to pressure and eventually hit.

Shields tends to load up on shots. She throws combinations, and she even sets her shots up very well. However, it is clear she wants to beat up her opponents. She is gunning for a knockout. In the hopes of accomplishing these things, Shields has gotten into a habit of putting 100 percent into her shots. This takes some of the speed off her shots, and it telegraphs those shots as well. This trait wasn’t as noticeable against opponents who pressed, loaded up or tried to overrun her with volume or aggression. In those fights, her opponents brought the fight to her and allowed her to get off easily.

Hammer is not serving herself up to receive power shots or to get into exchanges, so Shields is going to have to work to get in position and land shots. When Shields isn’t getting the results she wants, she begins to sit down and really try to put something extra on her shots. This leads Shields to expend more energy, telegraph her shots and compromise herself defensively.

Shields does have a mean streak, unlike some fighters who may be tough, slick and fundamentally sound, but don’t have a love of contact or a need for violent exchanges. Shields has the resume, skills, athleticism and IQ to box, counter, lead or be defensively responsible, but she eschews all of this in an effort to break her opponents. Shields has no interest in outclassing foes. She is here to outfight them, whether they’re leading or she is. Her goal is to take her opponent’s heart, slow them down, break them and then put them down.

Shields is trying to prove a point when she fights. She will fight in an inefficient manner in an attempt to make sure everyone knows she is better. Usually, this approach has worked in her pro campaign. She engaged Tori Nelson early and out-punched and outlanded her. Shields halted Nelson’s forward pressure with a combination of footwork, physicality and sharp punching before going on to outbox Nelson. Even in the fight against Gabriels, there were moments where Shields stayed on the ropes while looking to slip and counter just to show Gabriels that she can outfight her and outbox her on the counter or off the ropes.

The concern is that if an opponent can engage Shields emotionally or mentally, then they can get Shields to focus on proving a point rather than winning a fight. In her attempts to violently assert her dominance, Shields can put herself into positions where she makes a fight more difficult than it needs to be. By trying to walk through, Shields was dropped by Gabriels. Her need to reassert her dominance led to her getting out-positioned, missing punches and being on the business end of a number of counter punches that wouldn’t have been there had she taken a more deliberate approach.

It seems like emotions are running high between Shields and Hammer. Hammer might lack the power, athleticism and physical strength to make Shields pay, but she has the skills, workrate and seasoning to outpoint Shields if the former Olympian focuses on beating up Hammer instead of beating her.

Pace and activity are the biggest weapons for Shields. She seems to be immune to exhaustion. While Shields may show signs of being tired, she has yet to be unable to match or exceed the number and quality of shots her opponent has used against her. Shields has had control. She hasn’t faded to a degree where opponents could chop her down, land a big shot or rough her up. In the toughest fight of her career, Shields slowed to a degree, but she clearly gained a second wind against Gabriels and was able to ratchet up her pressure, her shots and the length of the exchanges.

Shields’ pace should be effective against Hammer. Once again, the issue becomes whether Shields will lean on her ability to ratchet up her aggression against an accomplished, experienced, disciplined fighter. It could be easy to dig a hole for herself from which she may not be able to dig herself out.