Why, hello there. First, I’d like to introduce, or for some reintroduce, myself. My name is DeAnna Bennett, an Invicta FC flyweight, formerly the “Argentine Assassin” and currently known as “Vitamin D,” but always an unashamed, awkward human. I have blogged before, documenting my experience as the Oprah of lapdances on The Ultimate Fighter 26 (You get a lapdance, you get a lapdance, everyone gets a lapdance!). I mean, how else do you celebrate winning a fight? But that was then, this is now.

Anyhoo, life’s been a strange adventure since then. I showed up for my TUF Finale fight looking like the “Big Country” of women’s MMA (not in fight skill, just in appearance), and I put on a underwhelming performance that saw them not pick up my contract after getting a draw. From there, I got picked up by Invicta FC again, and I returned to the win column fighting at Invicta FC 28 in my fighting home state of Utah. I’ll get to this experience at a later date, but yeah, it’s been a fun adventure that’s included me leaving my comfort zone of Utah and relocating to the great East Coast.

So this brings me to now. Where do I go from here? Well, that’s simple: I keep fighting. I may have had a shot at the UFC once and let it slip through my chubby fingers, but I won’t let it happen again. Here, I document my experiences and path back to where I should be. These are my stories (*queue Law and Order’s “Dun Dun”*).

OK, I don’t have anything too interesting to say at the current moment. No fight news to report at this time, but I am in the gym training and ready to go… so soon. Just gotta hold tight. 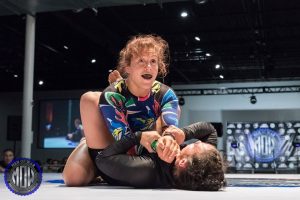 To hold myself over, I participated in a grappling match at the Men of War show in Freehold, N.J. Somehow the notion of grappling on a raised stage in front of an audience with no cage as a barrier is scarier to me than fighting in a cage with someone trying to punch my face off. Having the cage there was a safety zone barrier that I got used to, and not having it there was a bit intimidating.

After getting very little sleep driving back from the UFC event in Utica, N.Y., the night before, I got to the venue and started the freak out. Doesn’t matter the sport, any time I compete, whether a big or small event, I am a ball of stress. I love to compete, but I also want to do my best at all times, and when it comes down to it, I question if there was anything I could have done to be more ready. Silly brain, always trying to play doubt-filled games on itself.

I went out there and all the stress melted away. Could I have done better in my match? Yes. But I was there for the experience and to check that item off my bucket list. And I still got the win. Mission successful. Maybe if I do another one, I will actually train specifically for it and maybe put a little more heart into it. We’ll see what happens. My heart belongs in the cage, though. I have lots of unfinished business in there, and I am, admittedly, impatiently waiting for the next one to begin my journey back.

To get there, though, I need to train, and right now just so happens to be the time to go and do that. So for now, ta-ta and remember… safety first, then teamwork. Or something like that.