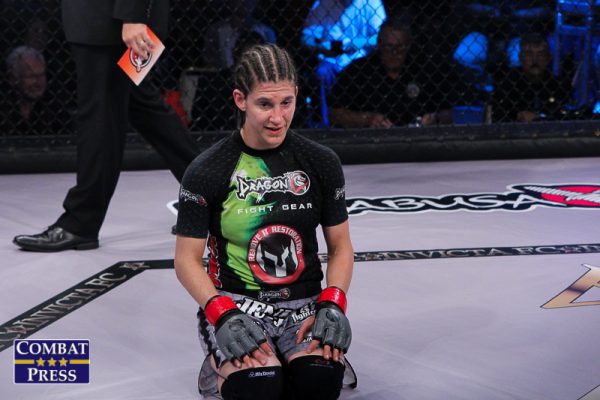 Evolution. It’s the driving force behind the success of humans. Throughout the years, the idea to evolve is what has kept us alive and thriving. Creatures in the animal kingdom are constantly evolving to survive the elements. Ideas have evolved to give us different ways to use energy to power our homes and our cars. The concept itself is inescapable. It’s crucial to our existence.

Without evolution, ecosystems and nations would become obsolete and fade into obscurity. The same can be said of the sports world. Football, for example, has evolved from the days when players wore leather helmets to today’s safety measures to prevent further brain damage. Even mixed martial arts has evolved since its days of no holds barred and “human cockfighting.” The difference between the two is that for football, the equipment has evolved. For MMA, it’s the fighters who have evolved.

To the hardcore fanbase, the name Roxanne “The Happy Warrior” Modafferi should instantly be associated with a true veteran in the world of women’s MMA. Modafferi has been a staple since her debut in 2003 and has fought in nearly every major promotion. She has 35 fights under her belt, and she has fought in three different weight classes, ranging from featherweight to her current home at flyweight. As with the sport itself, Modafferi continues to evolve.

“I’m trying really hard to be a top fighter,” Modafferi told Combat Press, “and I had known that my striking wasn’t quite up to par when I was first on The Ultimate Fighter, and I was on season 18. So I’ve been working really hard to get there with my striking and then physical conditioning.

“I thought, ‘Man, all these girls are stronger than me and everybody’s an athlete.’ So it’s pretty much been… It’s gone from in the past, where you could be just one-dimensional and still win fights, but now everybody’s very well rounded, so I have to kind of keep up. It’s a challenge, though, and that’s what I love about mixed martial arts. That’s why I started mixed martial arts in the first place, because I feel it’s the ultimate challenge of everything I’ve been training put together.

“That’s why I never lose my motivation. There’s always something for me to improve on. I’m always motivated every day to go in to train, to try a new technique or get stronger. I just wanna get stronger, and that’s where my motivation comes from.”

Motivation. So many times, the MMA world has seen fighters rise and fall. Their lack of dedication and motivation to the sport is evident. Even the idea of women fighting in the UFC was dismissed left and right for years. Many believed it would never happen. Then along came Ronda Rousey and everything changed. Now, women are more common in MMA, and they will continue to thrive.

“I think the reason — well, I consider myself kinda hanging in there — is that I can be taught. You can teach this old dog new tricks, so I’m able to evolve and I have evolved. So that’s why I’m able to kinda stay there, while I’ve seen some other fighters not quite be able to evolve and don’t quite make it.”

Evolution will be key for Modafferi when she takes on familiar foe Barb Honchak next week at The Ultimate Fighter 27 Finale. The rematch is seven years in the making. It almost came to fruition at The Ultimate Fighter 26 Finale in December, but Modafferi was chosen at the last minute to challenge for the inaugural women’s flyweight title after Sijara Eubanks was pulled from the card. Given the chance to fight for a title on less than 24 hours’ notice, most fighters would carry a bit of nerves heading into the fight. This was not the case for “The Happy Warrior.”

“I actually felt slightly less pressure, even though that sounds funny. I felt a little less pressure fighting Nicco [Montaño], because the rematch meant so much to me,” Modafferi said with a chuckle. “You know, I’ve been wanting to fight Barb for years, and that rematch means a lot to me. I’m excited, and I just kinda gotta use my mind and calm myself and try to lessen the importance of it. It does mean a lot to me, and I’m excited. And I want to show what I’ve learned in general, and also the fact that I’ve grown more than her and I can beat her. I think her fighting style hasn’t changed a lot. You notice a lot of the same patterns in her game. My fighting style has changed a lot, so I’m hoping that will be a good factor.

“I have a lot of confidence in my skill. I just have to make sure that I’m in shape and strong for it. I have some things in my mind from my last fight that I was not able to do, and I’ve trained them very hard for the last eight months, ’cause it took them this long to make the fight happen. So, I’m looking forward to being able to do that in my fight. It’s important to me to have evolved again into my next form. It’s not my final form, ’cause who knows when that’s gonna be, but my next evolution. I have not named myself yet.”

When the UFC introduced the women’s flyweight division, a plethora of fighters ended up in its ranks, including former Invicta bantamweight champion Lauren Murphy, Joanne Calderwood, Deanna Bennett, the aforementioned Honchak and, of course, Modafferi. It was a long time coming for the veteran.

“Man, I am so excited that the UFC finally had the [women’s] flyweight [division].” Modafferi said. “I knew it was going to happen, but I just didn’t know when, and I was praying that it would be within my career time, within the lifetime of my career, while I was still fighting and not retired. I’m very excited. I hope that I can win my next fight and not get cut and continue fighting in the UFC for a number of years.”

As with any fighter, the idea of a life post-fighting is always looming in the distance. It can be pushed back due to a fighter’s success or it can be planned far in advance.

“You know, I’ve really given it a little bit of thought, but I didn’t want to let my mind think about it too much, ’cause I didn’t want my brain to start thinking that I was already retired,” admitted Modafferi. “I really just wanna stay focused on getting stronger and getting better, and, honestly, I’ve never felt so healthy. When I was living in Japan, I was always injured and I could barely train, but here in Vegas, I have a great massage therapist [and] I have a great strength and conditioning with Lorenzo [Pavlica]. My massage therapist, Teri, is a miracle worker. Like, I just feel great. So, who knows how long I’ll be able to fight? I just want to get this rematch against Barb, who has beaten me before, and I would love to have another title run and get the title.

“I don’t really understand the rankings. They really do whatever they want. I mean [Valentina] Shevchenko basically beat somebody they brought in, and [Shevchenko] creamed her and she became number two in my division after only fighting in there once. And then she gets a title shot? What is that? As opposed to somebody who has a few fights, maybe like three or four fights, and they’re still not fighting for the title? It’s kinda not good, but whatever. It’s a business and I understand. It’s 50 percent sports and 50 percent entertainment. So, absolutely Shevchenko will sell that fight, so it’s the right decision. I’m trying not to put much weight into the rankings. I, of course, enjoy my status there.”

“John Wood, my head coach, pretty much controls all of my training,” said Modafferi. “He’s amazing. Also, Mike Pyle has been working with me for this camp a little bit, and Casey Milliken, [who is] one of my jiu-jitsu trainers. Those guys have been helping me out a lot.”

Evolution will be on display on Friday, July 6, at The Ultimate Fighter 27 Finale when Modafferi takes on Honchak.

“I don’t have as many followers on social media as do some other beautiful fighters who post glamour shots, but I get people coming up to me in the grocery store saying, ‘Hey! You’re Roxanne! Nice to meet you.’ And that’s pretty cool,” said Modafferi. “I think I win at life. I just want to put on a good fight for the fans. For Dana [White, UFC President. I want to] show everybody, including myself — especially myself — that I have evolved into Super Roxi, my evolved state.”