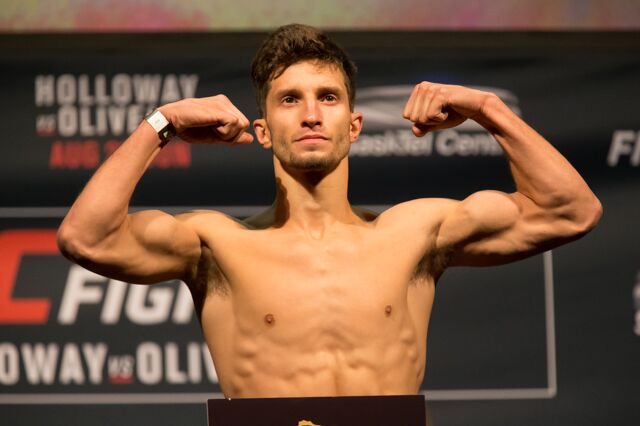 To describe someone’s career as a “roller-coaster ride” can be a cliché. However, this metaphor can be applied to Ring of Combat lightweight Frankie Perez’s career without eliciting too many eyerolls.

After compiling a 7-2 amateur record as a mixed martial artist, Perez turned pro in 2011 and joined the Ring of Combat promotion, where he won his first eight fights. Perez credits his first coach for his instant success. The relationship between Perez and his coach started when Perez attended an MMA fight while growing up in his native New Jersey.

“I went to the gym the next day, and it snowballed from there,” Perez told Combat Press. “I started competing in grappling tournaments not long after that. I have a good team under me, and I had a coach who made sure I was making the right moves as an amateur with having the right fights. He brought me on the right way. I really use all my attributes, and during my amateur career I really built my mindset to be successful.”

Perez’s roller-coaster ride began not long after his initial success as a pro fighter. He lost his first fight in Ring of Combat via a close decision to Chris Wade in 2014, but rebounded with a win in the former World Series of Fighting against Tommy Marcellino later that same year. During this time, Perez was in touch with the UFC about a possible opportunity.

“So I decided to keep fighting, and I wasn’t thinking about the UFC,” Perez said. “I went paintballing with some friends one day, and we were going to get some burgers and beer afterward. But I got a call from [UFC featherweight] Frankie Edgar’s manager, and he said ‘Welcome to the UFC. You have a fight in four weeks.’ So I didn’t get that burger and beer after all — I went straight to the gym.”

Perez also dealt with the deaths of his grandparents around the time he signed with the UFC. The call “felt like a sign.”

“Being in the UFC was a pretty crazy time,” said Perez. “You see these people on the TV, and it’s pretty surreal to have Bruce Buffer calling your name. But at the same time, it’s just another organization that puts on big shows. There are no superheroes in the UFC.”

Perez now trains with the aforementioned Edgar, Ricardo Almeida and Nick Catone in New Jersey. He made his UFC debut in 2015, but lost via knockout to Johnny Case. Perez bounced back with a first-round knockout of Sam Stout in his next fight, but losses against Marc Diakiese and in a rematch against Wade last year led to Perez’s release.

“I’m a head case,” Perez said. “I learned that if your head is not 100 percent in it and you overthink it, the situation will beat you. You just have to bite down on your mouthguard and go for it. I need someone to scare me. If I know I’m better than them, then I tend to take it down some. I was scared during the Stout camp — that guy is one of my idols. I didn’t know much about Diakiese, but I thought I would kill this kid, and I thought Wade was not on my level, but I still ended up on my back.”

Despite his 1-3 record inside the Octagon, Perez is very complimentary of his experience and especially of UFC matchmaker Sean Shelby, who offered Perez advice on how to handle his career going forward.

“It is what it is,” Perez said. “I have no one to blame but myself. There are no excuses, and it’s time to work my way back up the ladder. But I also have no more time schedules on my career.”

Perez, who now sports an overall record of 10-4, is returning to his roots. The UFC veteran will compete at Ring of Combat’s next card on Friday, June 8, against Jerome Mickle, who has a 3-5 record after losing four of his last five fights.

“Jerome is a tough guy. I’ve seen him fight a few times, and he beat a couple of my teammates,” Perez said. “Every fight is tough, and he gets to prove himself against a UFC vet who’s been in there with the best. I’ll just take my time and know that I can’t make any mistake, because he will throw a bomb when you least expect it.

“I’m excited to be home with Ring of Combat,” Perez added. “My friends and family will be there, so at least I still have the opportunity to do what I love and go fight. It’s been a roller-coaster ride, but if I stay healthy, there’s nothing I can’t do.”