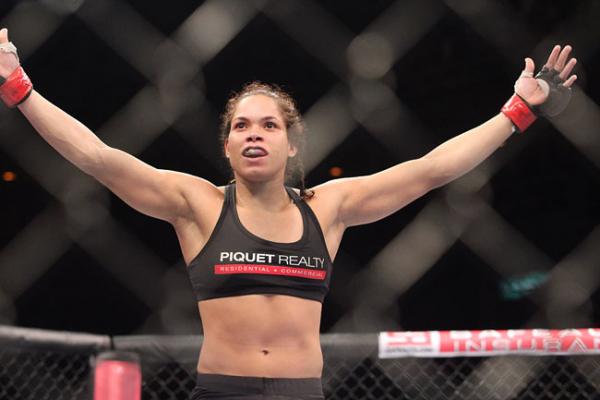 Another historic UFC moment is on the horizon, and yet again it involves women’s bantamweight champion Amanda Nunes.

“The Lioness” made history when she became the second person to knock out new WWE superstar and former UFC women’s bantamweight champion “Rowdy” Ronda Rousey while leaving even more of an impression than Holly Holm by doing it in just 48 seconds.

Nunes made also made history by becoming Brazil’s first female UFC champion and the UFC’s first openly LGBTQ+ champion, regardless of gender.

At the time, former UFC vice president of public relations Dave Sholler told USA Today’s Martin Rogers, “Amanda is an incredible ambassador. When you talk about all the great moments, having Amanda carry the flag literally and figuratively for the gay community is a seminal moment for our sport.”

Fellow lesbian fighters such as Liz Carmouche, Jessica Andrade and Tonya Evinger have all fought for UFC gold. However, UFC 224 will mark the first time a challenger — Raquel “Rocky” Pennington — and champion both openly represent the LGBTQ+ community. Given this context, it’s also important to note that they will serve as headliners rather than in the co-main event slot.

Nunes has been romantically involved with UFC strawweight Nina Ansaroff for a number of years. Pennington and strawweight Tecia Torres announced their engagement via Instagram in May 2017.

The event will be special to some for the possibility that it could give members of a minority group role models. It is due to the under-representation and oppression of the LGBTQ+ community that achievements like this may receive more attention in the media. Yet, it’s skill and skill alone that makes LGBTQ+ athletes just like everyone else.

In the predetermined world of professional wrestling, the WWE got behind former superstar Darren Young (Fred Rosser III) after a TMZ reporter caught up with him at an airport, seemingly at random, to specifically ask about the potential success of a gay wrestler in the WWE only for Rosser to come out on camera. While Rosser deserves respect for coming out and all that goes into being a successful professional wrestler, it could be said that he was a mid-level talent before and after his push.

With UFC’s pairing of Nunes and Pennington, it feels more clear that this opportunity was earned by athletes who happen to be LGBTQ+ rather than an attempt by a company to push an agenda. Since her loss to Cat Zingano at UFC 178 in 2014, Nunes has won six consecutive bouts, with four finishes, and Pennington has won four straight as well. After a run that included victories over Rousey, Holm and heated rival Valentina Shevchenko for Nunes, and with both fighters sharing a win over now-retired Miesha Tate, this feels like the single best bout to make in the women’s bantamweight division right now.

What about after UFC 224 on May 12? Well, let’s look at the top five competitors in the division and how the championship picture looks right now:

The solution in the event of a Nunes victory would appear to be the much talked about champion-vs.-champion superfight with Cristiane “Cyborg” Justino at 145 pounds.

If Pennington wins the title, there’s an outside chance that maybe she’d take the Cyborg fight or, more likely, a rematch with Nunes.

Vieira is 4-0 and could enter the picture with a few more impressive performances, but it would be fair to say she has little name value with casual fans at this point.

A positive for either woman may be that they become more known for sheer dominance rather than just their sexual orientation. Sadly, it wouldn’t be shocking to see the division put on ice for a while after Saturday night, which could be unfortunate for the community they so proudly represent.