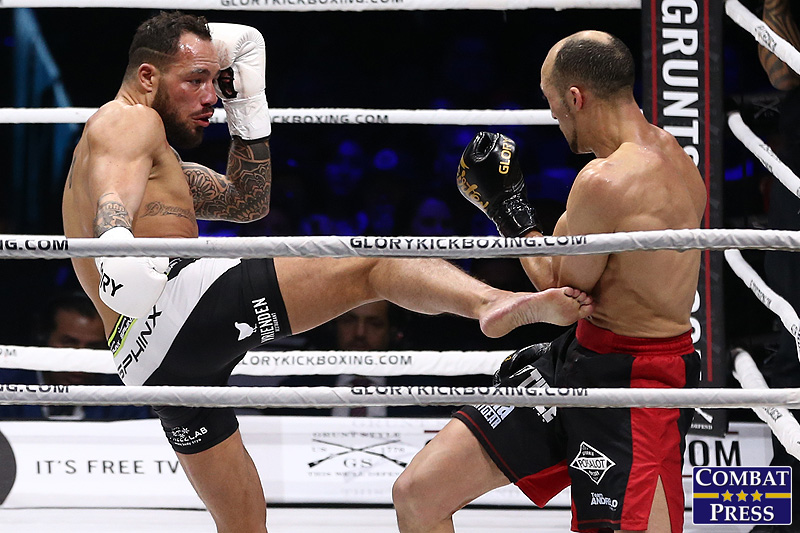 GLORY featherweight king Robin van Roosmalen continued his reign of dominance when he defended his featherweight title for the second time against Kevin VanNostrand. Van Roosmalen was content to let the American challenger throw caution to the wind in the first round, but that would be the only round van Roosmalen would give away. The Dutch kickboxing specialist put his foot on the gas and pressed forward for the remaining four frames of the championship bout. Van Roosmalen battered VanNostrand with heavy low kicks, brutal body shots, and a jumping knee that landed flush on the chin. The one-sided contest pushed the champion’s winning streak to five. We will soon find out who van Roosmalen is scheduled to face next when GLORY featherweight contender tournament winner Abdellah Ezbiri takes on former title challenger Petchpanomrung Kiatmookao at GLORY 53 in Lille, France.

GLORY 52 was the first event not to feature a one-night, four-man tournament in many years, due to the injury of Robert Thomas, who was scheduled to face Simon Marcus in a middleweight contender tournament. Instead, the former two-time GLORY middleweight titleholder took on undefeated American Zack Wells on short notice. Unfortunately for Wells, his moment in the spotlight lasted less than 90 seconds. Marcus turned up his offensive attack with Wells on the ropes, and it wasn’t long before the referee had seen enough to step in and stop the fight. Marcus was quick to call out the middleweight champion, Alex Pereira. However, the battle between Jason Wilnis and Yousri Belgaroui at GLORY 53 will likely determine who is next for Pereira.

The world’s top-ranked female kickboxer and GLORY super bantamweight champ Anissa Meksen moved her impressive resume to 95-3 with a unanimous-decision victory over the game Ashley Nichols in non-title action. Meksen will make a quick turnaround to defend her title against fellow French kickboxer Amel Dehby at GLORY 53 in her home country. Dehby has picked up three victories outside of the promotion following her only career loss, which came against Tiffany van Soest in the super bantamweight tournament final at GLORY: Collision.

Anatoly Moiseev tasted Nordin Ben Moh’s left hook to the liver in the first round, but the skilled Russian quickly turned the momentum around with a pair of spinning heel kicks to drop Ben Moh twice in the first frame. Moiseev dropped Ben Moh again with a left hook, but received a massive cut on his forehead before the conclusion of the fight. Moiseev walked to the ring for the final against Kong Lingfeng with blood still flowing down his face. The cut didn’t play a factor in the fight, though. Moiseev took out his Chinese opponent in the first round with strikes. The former top-10 kickboxer joined the likes of Yohann Drai and Victor Nagbe in the field of 16.

In the other qualification tournament, GLORY veteran Niclas Larsen knocked out Noppakow Siriluck with a jumping switch knee in the second round. In the other half of the bracket, China’s Tian Xin stopped David Calvo with a left hook to the liver in the first round. Larsen’s experience took over in the final and he moved into the final 16 with a hard-fought decision victory over Xin.

Elsewhere on the card, former top-10 kickboxer Jomthong Chuwattana returned to the win column with a decision nod over 2014 Kunlun Fight tournament champion Dzianis Zuev. After a string of tough losses in 2017, Jomthong has won four of his past five fights and could make an appearance in a 70-kilogram qualification tournament in the near future.

In what was a massively underwhelming contest — and that’s really putting it mildly — Anthony Joshua picked up the unanimous decision over Joshua Parker. The fight lacked any significant moments, with both Joshua and Parker playing it conservative. Parker struggled to find his range against the taller Joshua. Parker worked a jab that mostly came up short and landed a few body shots once he did manage to get inside. Joshua worked his jab as well and landed a few nice uppercuts, but it was a subpar performance. It didn’t help that the referee managed to oddly get in between the fighters when they were trading punches on a number of occasions. The win, which came in front of over 80,000 fans at the Principality Stadium in Cardiff, Wales, puts Joshua at four major world titles now. He now holds the IBF, WBA, IBO and the WBO title that was previously held by Parker.

Still, despite the letdown of the fight itself, Joshua remains an impressive 21-0 with 20 knockouts on his resume. After the contest, Joshua was asked what’s next, and the Brit made it clear he wants Deontay Wilder. This match-up seems like a longshot to happen next, because of the fighters’ promoters playing hardball.

Elsewhere on the card, Ryan Burnett improved to 19-0 with a unanimous-decision victory over Yonfrez Parejo. Despite injuring his hand in the fight, Burnett won easily, taking the scorecards 120-108, 120-108 and 116-112. He remains the WBA bantamweight champ.

A “Knockout of the Year” candidate was delivered when Alexander Povetkin put David Price out on his feet. Povetkin finished it with a left hook that the referee should’ve stopped from ever happening. Povetkin has drawn plenty of ire from boxing fans and media for his problems staying clean. He was most recently suspended following a failed drug test prior to his clash with the aforementioned Wilder last year. Controversial or not, Povetkin remains one of the most feared heavyweight fighters, only losing to Wladimir Klitschko in 2013.

With an off week for both the UFC and Bellator, the MMA scene was largely quiet through Easter. However, there was one big winner whose most recent victory furthered the question of why he still isn’t in one of the world’s top promotions. That man is M-1 welterweight kingpin Alexey Kunchenko.

The 33-year-old Kunchenko is now undefeated through 18 fights. He’s looked excellent while battering and knocking out numerous opponents, including Murad Abdulaev to win the crown in 2016 and Sergey Romanov in a late 2017 title defense. At M-1 Challenge 90, Kunchenko added to his resume with a third-round stoppage of Alexander Butenko. With Kunchenko’s resume, you’d think the phone would be ringing off the hook. It’d be a real shame if the Russian doesn’t get an opportunity to prove himself against the best the world has to offer.

In case anyone was wondering, UFC veteran Joe Riggs fought to a split draw with Boris Polezhay on the M-1 card. Riggs is now 7-0-1 in his eight outings since parting ways with the UFC. He’s faced some mixed levels of competition, but that run does include wins over Cody McKenzie and Shonie Carter.

UFC veteran and MMA bad boy Rousimar Palhares did not get the opportunity to injure another fighter on Easter weekend. It’s not because he didn’t fight, but because his Absolute Championship Berkut 85 opponent obliterated him in less than a minute. Palhares, who was vying for the ACB interim welterweight strap, attempted several leglocks over the course of the fight. Those attempts were fruitless, and they came at the expense of an extreme amount of damage taken by the Brazilian as his counterpart, Aliaskhab Khizriev, rained down punches. Khizriev scored the knockout in just 58 seconds.

Sean Santella successfully defended his PA Cage Fight flyweight crown with a unanimous-decision victory over the formerly undefeated Charles Johnson at the organization’s 31st event. The 125-pounder was set to make his UFC debut at UFC 201 in 2016, but he failed to get through the pre-fight medicals. He’s gone 5-1 with four finishes since then and should be on the UFC’s radar. Perhaps he’ll get a second chance at the big show soon.

World Series of Fighting veteran Tyson Nam wasn’t so fortunate in his own bid for a title. Zhalgas Zhumagalov edged Nam on the scorecards to win the Fight Nights Global flyweight strap at FNG 86.

At Kunlun Fight 71, The Ultimate Fighter: China winner Zhang Lipeng continued to build upon his already incredible resume outside of the Octagon with a second-round submission victory over Bagautdin Abasov. Lipeng has now won 18 of his 19 fights since the UFC cut him. He has built a large fan following in his home country and continues to help Chinese MMA grow. It’s truly head-scratching to see the UFC let a fighter go who could easily help build its product in one of the fastest-growing markets in the world.

Zhang Lipeng submits Bagautdin Abasov in the second round #KunlunFight71 – He moves his record to 18-1 since getting cut by the UFC pic.twitter.com/9Uyq9yi9Uk

In prospect news, female strawweight Chelsea Bailey maintained her unblemished record with a decision win over Kelly D’Angelo at Valor Fights 48. Bailey, who was quickly eliminated from The Ultimate Fighter 23 via a decision loss to Tatiana Suarez, added to a record that already included a win over Invicta veteran Kaline Medeiros. Bailey’s biggest struggle is in remaining active: this was her first fight since the early 2016 loss on TUF, and she has only recorded three official fights since her 2013 pro debut. She needs to get busy if she wants to land in a larger promotion.