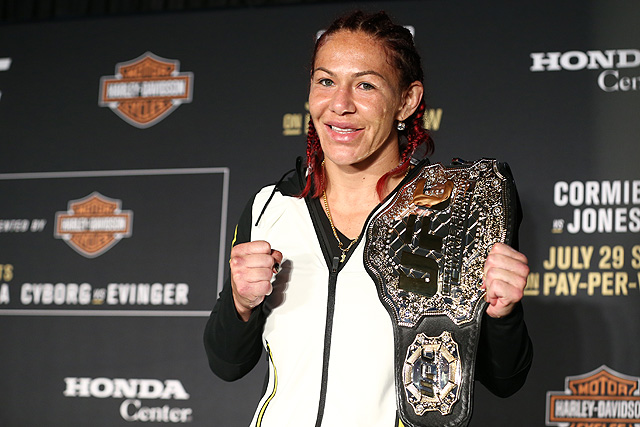 Action on the women’s side of the MMA world is heating up. UFC 222 and Bellator 195 served up a number of significant fights that have an impact on the women’s featherweight, bantamweight, flyweight and strawweight divisions. Here are four key stories to come out of these two events.

Ketlen Vieira has been on quite the run recently. With wins over Cat Zingano and Sara McMann, she has people talking about her prospects for a title shot. Let’s slow down, though. As impressive as those wins may be, the fact of the matter is that they are big wins in name only. McMann and Zingano are the most inconsistent bantamweights in the history of the division. They are essentially one-dimensional athletes with huge issues in regards to cage IQ and situational awareness.

As good as Vieira looked in winning these fights, McMann was clearing beating Vieira before she ended up in a bad spot and was finished. Vieira only won a split decision over Zingano, a fighter who hadn’t been in the cage in almost two years and was dominated in her last fight by Julianna Peña, who could be considered a lesser version of Veira. Zingano’s last win came almost three and a half years ago, too. So, when you take a closer look at Vieira’s last two opponents, the value of the victories lessens, as does the Brazilian’s case for a title shot.

Vieira needs at least one more fight. The UFC should pair her with Marion Reneau. “The Belizean Bruiser” has won three out of her last four fights and salvaged a draw against perennial top-10 fighter Bethe Correia. Reneau and Vieira are leading the pack in the bantamweight division, but both ladies need at least one more legitimate win to put a stamp on their argument and show that they are ready for the inevitable step up in class that comes when challenging for the crown.

The Difference a Year Makes

A little over a year ago, Emily Ducote was on top of the world. She had won four out of five fights in Bellator and was considered the No. 2 flyweight in the promotion. Her only loss in this span came to Ilima-Lei Macfarlane, who would later beat Ducote again when the two vied for the Bellator women’s flyweight belt in the inaugural title fight for the division.

The two losses to Macfarlane weren’t terrible for Ducote. She was still the clear No. 2 in the division. Now, following a loss to upstart fighter Kristina Williams, Ducote is at the back of the line and trying to regain the momentum she had enjoyed a little more than a year ago.

The losses to Macfarlane weren’t shocking, but neither was the loss to Williams. Ducote’s strengths and weaknesses lined up very poorly against the bigger, longer and more versatile striker. What is shocking, though, is that a woman who had been able to be competitive with one of the best flyweights in the world wasn’t able to establish any definitive momentum or sustained success against a woman who was only in her second pro fight.

Ducote is young and experienced. She has a defined identity as a fighter. However, she still needs refinement to address specific technical and strategic shortcomings that will hinder her moving forward as the division begins to fill out. There is a lot of film on Ducote. If she wants to continue to exist in the division’s upper echelon, then she is going to have to build on the success she has had and the improvements she displayed in the losing effort against Williams.

A Work in Progress

Mackenzie Dern made her Octagon debut at UFC 222. She wasn’t dominant, but she showed heart, drive, aggression and mental toughness in the biggest spot of her career and against the best opponent she has faced.

We learned Dern is indeed a real fighter and one who has both a burgeoning fan base and the drive to commit and succeed in the arena of MMA. We also learned that Dern is still painfully one-dimensional in regard to what she can do effectively, both offensively and defensively. Dern is a world-class grappler. However, she is also an awful wrestler and a barely serviceable striker — one who is willing, but woefully underdeveloped. This isn’t the fault of Dern or her camp. She has been fast-tracked, but she needs more time. The focus needs not to be on developing a star, but on developing first a competent fighter, then an above-average fighter, and so on until she can potentially become a great fighter.

Dern has looks. She has a country behind her. She has a separate combat sport that will watch her rise or fall in MMA. There is no need to push her in with anyone risky, and there is no reason to rush her back in the cage. Dern needs work, patience and great matchmaking to help her develop not just the individual aspects of her game, but her ability to use them in an offensive, defensive and counter measure. More importantly, she needs to show the ability to consistently and effectively transition between the ranges, using the strengths she has to create avenues for success in other ranges and provide a greater margin for error in those other ranges.

Dern is a talent and a potential star; but she isn’t ready quite yet. If her team or the UFC act as if she is ready, then it will be a short ride for Dern.

The Mike Tyson of Women’s MMA

Ronda Rousey was often described as the Deontay Wilder of women’s MMA. She was closer to the Muhammed Ali of the sport, in the sense that she wasn’t a true technician but more of a attribute-based fighter who wasn’t so much feared as she was targeted by her peers due in large part to her lack of experience and gaping technical holes. Much like Wilder, Rousey’s respect came as she began to cut a path through the best available opposition in her atmosphere. Even those who hated her had to respect the results. Rousey was never really feared. Everyone wanted their shot, and everyone felt they could not just expose her holes but take advantage of them.

Meanwhile, UFC women’s featherweight champ Cristiane “Cyborg” Justino is more like Mike Tyson. She is violence incarnate. She is fast, strong, destructive and savage in how she distributes abuse to all who would challenge her. Cyborg isn’t just athletic, she is one of the more experienced and skilled fighters in MMA, period.

The most dangerous weapons in her arsenal are her highlights and her training montages, though. The footage paints the picture of an unstoppable juggernaut who can be slowed but never stopped; one whose strength and power cannot be avoided, much less resisted. Many of her opponents are already defeated before they step into the cage. They’re afraid to counter, lead or commit to any attack. They holster their best weapons and any sense of aggression for fear of the penalty that will be paid for their insolence.

Cyborg’s reputation precedes her. The Brazilian has soundly defeated most of her opposition before she ever lands a punch.