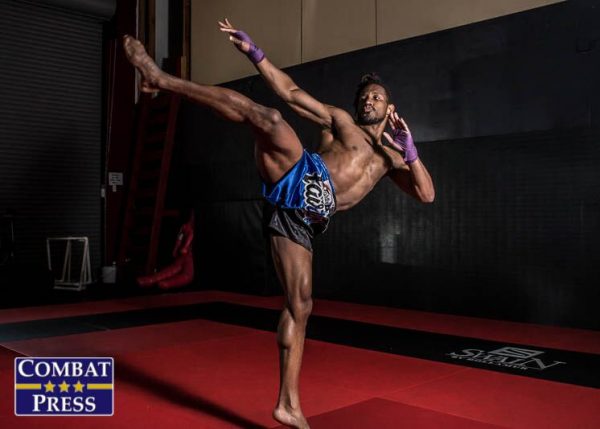 When it comes to Muay Thai, the San Francisco Bay Area is a hotbed for up-and-coming professional fighters. The area also provides a home to household names and legends such as Jongsanan Fairtex, Ganyao Arunleung and the more recent Kevin Ross. With this demanding star power and mass of high-level fighters, one would think that there would be no shortage of attention-grabbing persona to bump into. However, there are few, if any, that can turn the room into a high-energy, laugh-filled party more so than Charles Rodriguez.

Given his massive personality and natural charisma, it does not take long for one to guess how Rodriguez earned the “Rockstar” moniker. Whether it is a tiny weigh-in room with dehydrated and hungry fighters, a promotion’s media day or a packed arena, the man’s positive attitude, bright sense of humor and abandon of any representation of ego can change a serious situation or downtrodden event into the place to be, regardless of whether he’s on the card or just there to support his teammates. Now, with a professional kickboxing record that stands at 5-0, Rodriguez brings his skills to the GLORY Kickboxing organization for a battle with Brian Bruns at GLORY 52.

“I am hungry to fight,” Rodriguez told Combat Press. “For the most part, I let my coaches worry about the guiding and logistics part of it. It’s my job to be the crazy fighter that wants to fight and their job to be like, ‘OK, fight this guy.’ I haven’t even watched tape on my upcoming opponent, because I do not need to visualize it. I trust my coaches to study the tape, tell me what to work on, and put the game plan in front of me, and I focus on that.

The GLORY rule set follows along the lines of K-1, which is different than the rules a Muay Thai practitioner follows in competition. Rodriguez will lose some of the weapons he has utilized in the past.

“My last amateur fight was a K-1 rules match, and it was easier, because I was newer at using my elbows [in Muay Thai],” said Rodriguez. “After that, I fought four fights under Muay Thai rules, and I was like, ‘God, I love elbows!’ But once again, I relied on my coaches, and throughout the camp I worked through the instincts and feel very comfortable with not using them now.”

What of his “Rockstar” persona? More and more athletes in combat sports have created alternative characters to garner attention. Is Rodriguez one of these fighters, or is this the way he is around the clock?

“It was always big energy and loud,” Rodriguez admitted. “At school, it was a problem. Yeah, I have been the ‘Rockstar’ for a very long time. However, it doesn’t mean I can’t separate myself from that person and be the person in the lab with my head down, putting in work. In the ring, I am not out there showboating. I am focused and determined, but can provide the personality that people want to see at the same time.”

Rodriguez also views his personality as an opportunity to explore life in other industries.

“I’m ready to take on [WWE pro wrestler] Triple H as soon as he answers my call,” said Rodriguez. “I mean, I am ready to hit anyone with a steel chair. I am realistic with kickboxing and the age limits that it has. My hips are already 58 years old, and while I am ready to run this vehicle as far as it can go, afterwards I’m going to hit Triple H with a chair.

“The goal is to fight as long as [is] safe and healthy. I don’t really have a goal, and each year, I look back and I am grateful. I mean, my birthday is on April 2nd and I fight in GLORY on March 31st. I get to fight in GLORY before I turn 29 — I wasn’t planning on that! I will see what next year holds, and when I am 30, I will look back and say, ‘I liked that! Can I do it another year? Another five years?’ Now I know that’s not the best plan, because it is based around not having a plan, but I haven’t planned any of this. I am just enjoying the ride.”

One of the most attractive things in Muay Thai is the community. Rodriguez knows this as well as anyone.

“While I am out there, I want to represent this awesome West Coast Muay Thai movement that we have going on out here,” he said. “I owe a lot of the paramount points of my career to Geoff Quares and his promotion’s Bay Area Challenge and Triumphant Combat Series. And it is great to see that as I have grown as a fighter, they have grown alongside me and we are mirroring each other’s evolution. Big shout out to them to both of our continued future successes.

“I am a product of Bay Area-grown talent and I want to display that in GLORY. I want them to notice that there [are] talents, personality and warriors in this area. We should be all around the world, because there are some of the dopest people I know out here, and I would like to take my success and help pioneer that.”