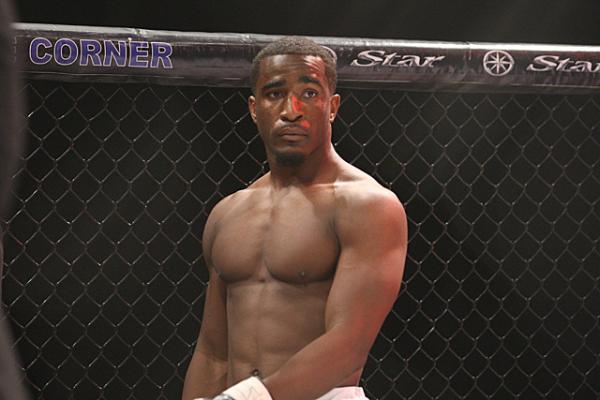 There are currently over 500 Texas Roadhouse restaurants in the United States. That means there are 500 places serving up some of the most delicious dinner rolls you can feast on. Don’t get me started about the butter, either. That’d take a whole other article. But I digress. This isn’t an article about food. It’s an article to introduce a man who gets his UFC debut served up Sunday at UFC Fight Night 126 in front of 10,000-plus rowdy Texans in Austin. He’s a man who also happens to work full-time at a Texas Roadhouse up in the Dallas-Fort Worth area.

“The Roadhouse I work at is one of the busiest Roadhouses in the nation, so I go through hell every night just to get money,” UFC newcomer Geoffrey Neal told Combat Press. “Yeah, everybody thinks I’m this super celebrity. God walking around and I’m like, ‘I am nobody’ [laughs]. Just because I’m in the UFC don’t mean I’m famous or rich or anything. I still have a long ways to go to get to that point.”

Neal attended Copperas Cove High School in central Texas, playing defensive line for one of the more accomplished teams in the state. The Bulldawgs finished with a strong playoff run in 2007, led by future NFL quarterback Robert Griffin III. Football would stay in the immediate future for Neal until his talents brought him from the field to the cage.

“I played football my whole life, and I didn’t get that D1 scholarship that I wanted,” said Neal. “[I] ended up going to a [NCAA Division] III college [and] really didn’t like the program — just the people there weren’t committed like I was to the sport, so it sucked away my motivation to play football. But I still had that itch to do something active, something competitive. I had watched some MMA on TV, and I was like, ‘You know what, I think I can do that.’”

One of the aspects of a fighter’s career that often gets lost is the start of their MMA journey and the amateur fights that come with it. Fighters rarely jump right in as a pro. There’s a process of building up to that level and getting comfortable with the skills they possess.

“My first ammy fight was the year I started, like six months after I started in 2010. I felt naked. I felt like I was jumping off a cliff,” said Neal. “With football, you have a team behind you. You have a helmet. You can hide behind your facemask. With MMA, you’re out there. And I had never been to an MMA event before I fought. My first experience of a cage was me walking out to a cage. It was a real shocking experience. I won the fight, but it was something I had never experienced before, and afterward I fell in love with it.”

Neal racked up 11 fights as an amateur, suffering only one loss. The differences in the handling of his first amateur loss and his pro loss show a fighter who’s matured.

“I fucking cried [and] threw a fit,” admitted Neal, reflecting on his first setback as an amateur. “I fought some hometown guy. We’re actually good friends now. He was a hometown dude, and his fans were a bunch of fucking dickheads — worse than Dallas Cowboy fans. They were just yelling and they started talking shit to my dad, and I started trying to go after them walking out of the cage. Wasn’t the best look.”

And how about that first professional loss?

“[I] still was upset, [but] I didn’t lash out,” said Neal. “[I] still cried like a little bitch backstage, but that first loss, I just accepted it. I took it as a learning experience [and] started working more on my ground game and my cardio. I took it pretty well.”

Neal addressed the holes in his game following the defeat. He went on a 4-1 run with three knockouts. His performance through these five fights landed him an opportunity of a lifetime: a chance to fight in front of UFC President Dana White on Dana White’s Tuesday Night Contender Series.

“The whole experience still hasn’t sunk in, because it happened so quick,” said Neal. “I had just fought the week before. I got the call Friday, and I had fought the Friday before. I was sitting at work chilling and I get a call, and my coach says, ‘Hey, pack up your shit. We’re going to Vegas. You have a fight on the Contender Series.’ It was crazy. Everything happened so quick and then I got the contract, and now I’m sitting here in a hotel with all this free UFC shit.”

The performance that put Neal in a hotel with all that free UFC shit was just your average highlight-reel left hand that dropped his opponent, Chase Waldon, to the canvas. Waldon turtled up with only the ref to save him from a further beating.

Now, Neal hopes those hands lead him to a UFC win in his debut. His opponent, Brian Camozzi, is also looking for his first Octagon win and should come out as a hungry fighter as well, even more so after suffering two defeats in a row. Whatever happens, expect the trademark violence to which Neal’s fans have grown accustomed.

“It’s gonna be a first-round knockout,” Neal said. “Somebody is getting knocked out.”

A knockout would certainly lead to more fans, many of whom might show up to Texas Roadhouse not just for those dinner rolls, but to see a UFC fighter coming off a showcase performance.