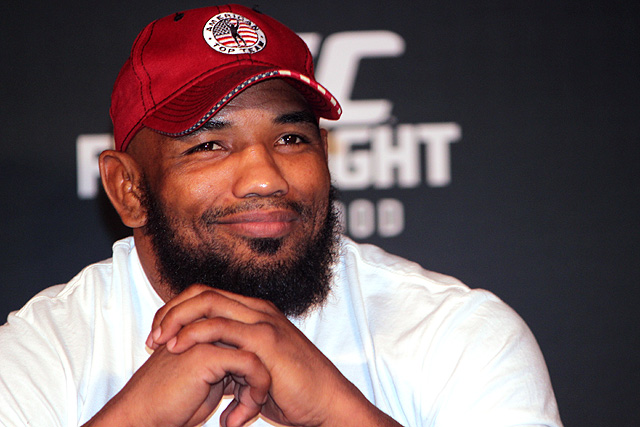 Just when it looks like Yoel Romero lacks explosiveness, he strikes. That was exactly the case for the Cuban-born middleweight on Saturday night at UFC 221. After more than two rounds of trading strikes with opponent Luke Rockhold, Romero suddenly connected with a punch that sent Rockhold to the ground. Then, he closed the distance and threw one more vicious left hand to put the former champ to sleep.

Romero’s power is ridiculous, to say the least. The former Olympian’s only recent loss came to current champ Robert Whittaker, and all signs point to a rematch between the two men for the undisputed strap. Despite his previous stumble against Whittaker, Romero’s power means there’s no guarantee that Whittaker can emerge with a second win. There’s a chance the UFC could end up with a 40-year-old champ atop it’s 185-pound division.

Curtis Blaydes had the more prominent match-up in Perth, Australia, when he took on Mark Hunt in the UFC 221 co-headliner, but he’s one of two fighters on the night who appear to finally be ushering in a new class of heavyweights. Blaydes survived at least one scare against Hunt and smothered the former kickboxing champ en route to a decision victory. Meanwhile, Tai Tuivasa added a second first-round stoppage to his UFC resume. Tuivasa, who finished Rashad Coulter in his Octagon debut in November, needed even less time to demolish Cyril Asker. The big 24-year-old needs to prove himself against the next tier of UFC heavyweights, but there’s certainly a lot of potential there.

There’s only one longtime mainstay among the flyweight elite who has yet to get his shot at Demetrious “Mighty Mouse” Johnson. That man is Jussier “Formiga” da Silva. Formiga put on another outstanding performance on Saturday night with his spinning-backfist knockdown and choke submission of Ben Nguyen. It’s time we see Mighty Mouse face off with Formiga.

Israel Adesanya’s transition to MMA, and now to the UFC, is complete. The former kickboxer still needs to work on his takedown defense and ground game, but he weathered the takedowns and grappling of Rob Wilkinson on his way to delivering a big technical knockout finish on the UFC 221 preliminary card.

There were a few interesting bouts outside of the UFC this weekend as well.

Heavyweight prospect Alexander Romanov continued to steamroll through opponents. The undefeated 27-year-old needed just 40 seconds at Eagles FC 8 to score a takedown and land a flurry of ground-and-pound strikes for the TKO finish against Alexander Stolyarov. Romanov claimed the Eagles Fighting Championship belt with the victory. Romanov has mostly fought mediocre competition, but his ability to avoid takedowns, score big takedowns of his own, and rain down punishment from top position makes him an intriguing up-and-comer.

The press release for M-1 Challenge 87 called Arman Ashimov’s victory over Mikael Silander for the M-1 flyweight belt an upset, but we didn’t see it that way here at Combat Press. Ashimov’s impressive power was difficult to overlook, and it turned out to be the answer to defeating someone with Silander’s fight style.

Nineteen-year-old kickboxing prodigy Tenshin Nasukawa continued his claim as the next great fighter from Japan with a masterful performance against former Lumpinee Stadium champion Suakim Sit.Sor.Thor.Taew at KNOCK OUT: First Impact. Nasukawa said post-fight that he was disappointed he couldn’t knock out a much larger current Thai stadium regular, who just recently won by spectacular elbow at Lumpinee Stadium just three weeks ago. Nasukawa has now won all 24 of his fights under kickboxing and Muay Thai rules including big time victories over Lumpinee champions Suakim and Wanchalong PK.Saenchai, former boxing world champ Amnat Ruenroeng, and top-ranked kickboxers Ignacio Capllonch, Ryan Sheehan and Fred Cordeiro. Seriously, is there anyone that can stop this kid?

Krush 67-kilogram titleholder Hitoshi Tsukakoshi defended his title against Keita Makihira at Krush.85 on Monday morning from Tokyo, Japan. Tsukakoshi has now won five straight inside the promotion including three knockout victories. However, there is one glaring blemish in that time frame outside of the promotion against current K-1 welterweight champion Yuta Kubo, who defeated Tsukakoshi during the semifinals of the K-1 67.5-kilogram championship tournament. Kubo defends his welterweight title at the massive K-1 Festa.1 in March, but it wouldn’t be unheard of for either Tsukakoshi to challenge Kubo or for Kubo to come down to Krush for another title.

The other big winners on the fight card were Gonnapar Weerasakreck and Kaito Ozawa, who scored dynamic knockout victories to push themselves further up the rankings. Ozawa, a former Krush champion, stopped his losing skid with a destructive stoppage of Yuzuki Satomi in under 60 seconds. Gonnapar will likely move back into K-1 for a big fight following his knockout streak in his recent Krush run.