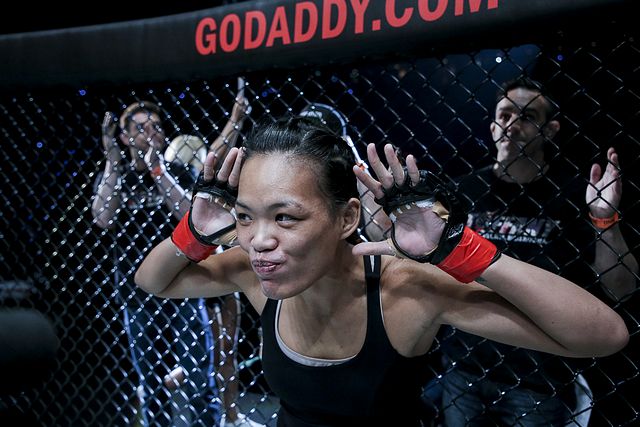 Out of Obscurity: LFA 31, ONE Championship and Gladiator 005

With reigning featherweight champion Kevin Aguilar on the sidelines due to injury, the Legacy Fighting Alliance has opted to create an interim title for the 145-pound division. That interim belt will be on the line at LFA 31 when Bobby Moffett meets Thanh Le.

After a 7-1 start to his pro career, Moffett made an unsuccessful bid for the Resurrection Fighting Alliance featherweight title. The Brazilian Jiu-Jitsu black belt lost a five-round decision to Raoni Barcelos in that fight, but he went on to eke out a split verdict over T.J. Brown in his final RFA fight and decision Nate Jennerman in his LFA debut. The 27-year-old MMA Lab product does his best work on the ground, where he’s picked up six submission victories. He also has one knockout win, but he’s never been stopped in a pro fight.

The 32-year-old Le has made the rounds. After a debut loss in 2013, Le scored four first-round finishes en route to a spot in The Ultimate Fighter 22 house. The striker scored a knockout over Andrés Quintana in his first fight on the show, but he came up short in his next outing against Martin Svensson. Le, who’d been competing as a lightweight throughout his career, made one more appearance in the weight class after his TUF tenure, but he’s since shifted his focus to featherweight. He needed less than two minutes to destroy Alex Black at LFA 3. Le went on to add a third straight knockout finish at the second edition of Dana White’s Tuesday Night Contender Series when he stopped Lazar Stojadinovic in the second round of their fight. Overall, Le has six knockout victories. His only official pro loss and his exhibition loss on TUF both came via submission.

This is the classic striker-vs.-grappler contest. Moffett is a top-notch ground specialist who has tapped four opponents within the first frame and two in the second stanza. Le is adept at putting opponents to sleep early, but he’s also proven to be vulnerable to the submission.

Le is an intriguing prospect, but the holes in his ground game are a serious concern. Moffett is a strong grappler, and his work with John Crouch and the crew at MMA Lab only serves to bolster his strength by putting him in the gym with plenty of strong wrestlers. Le might be a little too willing to test his ground skills in this contest, and it’ll certainly be to his detriment. Moffett will find an opening and lock in a submission for the victory.

The UFC has added a women’s flyweight division, and now it’s time for ONE Championship to crown what, due to ONE’s unique weigh-in rules, is essentially the league’s 125-pound champion. The promotion, however, is calling the vacant title a strawweight championship. The two ladies vying for the crown are Tiffany Teo and Jingnan Xiong. On a side note, shouldn’t this card be dubbed “Queens of Courage,” considering the headlining duo’s gender? Anyhow, on to the fight.

The 28-year-old Teo hails from Singapore and has quickly become a top strawweight and flyweight prospect on the women’s side of the sport. Her 2016 campaign kicked off with three straight first-round finishes across two regional promotions before she landed in ONE Championship to close out the year with a second-round submission of Walaa Abas. The “Soul Crusher” kept things rolling in 2017, a year in which she won three fights. Her first two appearances of the year ended on the scorecards, where Teo topped rookie Hertati Lumban Gaol and .500 fighter Rebecca Heintzman. In her most recent outing, Teo locked in an armbar to score a first-round submission victory over Puja Tomar, another rather inexperienced foe. Overall, Teo has finished two fights via strikes and picked up three submission victories.

Xiong is one of the bigger prospects on the Chinese women’s MMA scene. “The Panda” was a Kunlun Fight regular from her 2014 debut up until the end of 2016. During that stretch, Xiong, now 30, fed mostly on inexperienced opponents, including Julia Borisova. The one anomaly in this run was her lone loss, which came in a 2015 fight against women’s MMA veteran Colleen Schneider. Schneider edged Xiong on the scorecards in Xiong’s native China to take the victory. In 2017, following scrapped Kunlun bouts against Alesha Zappitella and Simone Duarte, the Fighting Empire and Phuket Top Team export transitioned to ONE Championship and met April Osenio. Xiong needed less than four minutes to steamroll Osenio. Overall, the Chinese star, who also holds a victory over Lena Ovchynnikova in sanda competition, has seven knockouts and just one submission finish as a pro MMA fighter.

These two ladies are accomplished finishers, but neither has been able to pick up a signature win. Xiong lost to Schneider, who stands as her best opponent to date. Teo, meanwhile, has yet to take on a well-known opponent (although that will change when she meets Xiong). Schneider is a tough grinder of an opponent, and her experience level made her a good bet to overwhelm Xiong.

This fight is far different for the Chinese fighter. Her boxing skills and Brazilian Jiu-Jitsu savvy — she won the China Open BJJ Championship in 2017 — put Xiong in a strong position going into her fight with Teo. Teo isn’t too shabby herself. The Singapore native holds a national boxing championship in her homeland and is highly decorated in BJJ competition in Asia.

Teo’s start in the world of martial arts came through the world of Muay Thai, but she’s faced with an opponent who packs a ton of power. Xiong also has a dangerous grappling game that could put Teo in serious trouble. Furthermore, the Chinese star, while failing to win, did last three full rounds with Schneider, a fighter who has shared the cage with the likes of Sarah D’Alelio, Liz Carmouche, Shayna Baszler, DeAnna Bennett, Brenda Gonzales, Irene Aldana, Raquel Pa’aluhi, Tonya Evinger and Kate Jackson. Schneider even topped Gonzales and Pa’aluhi, and she took Carmouche and Evinger the distance. Xiong was beat up in that fight, but she never quit.

The wealth of experience Xiong gained in those three rounds adds to a solid resume and gives the Chinese fighter the edge here. These ladies love the finish, and either of them can score it regardless of where this bout heads. Xiong, though, stands out as the favorite. She might even add to her knockout total when she clashes with Teo.

The Japanese MMA scene has been mostly quiet so far this year, but Gladiator is stepping up for its fifth event, which takes place in Osaka, Japan. The lineup doesn’t have quite as much depth as Japanese cards usually feature, but it’s headlined by a lightweight championship showdown between titleholder Ken Hamamura and challenger Yasuaki Kishimoto.

The 34-year-old Hamamura is a true veteran of the sport. He debuted under the Deep banner in 2003 and has fought at least once a year ever since. He was most active early in his career, competing four to six times a year from 2005 through 2008. Despite a lengthy resume of 42 fights, Hamamura has never won more than four fights in a row. He also lacks a signature win, though he defeated Takenori Sato long before Sato won a Pancrase title or appeared in the UFC. Hamamura’s other highlights include victories over Hidehiko Hasegawa and Hidetaka Monma, but he’s also suffered losses to the likes of Xavier Foupa-Pokam, the aforementioned Hasegawa and Daisuke Hoshino. The Honey Trap and Tri.H Studio fighter has scored 15 knockout victories and three submission finishes.

Kishimoto is just one year younger than his opponent. The Cobra Kai MMA Dojo product has been competing at the professional level since 2007. Kishimoto went 14-3-2 through his first 19 fights, but he has fallen on harder times in his more recent fights. Since 2012, he has struggled to string together victories. His longest streak in this stretch consisted of three consecutive wins. The Deep mainstay has made stops under the Powergate, Shooto, Heat and Gladiator banners as well. He came up short in a bid for the Deep lightweight strap when he dropped a decision to Daisuke Nakamura. He does, however, hold victories over such notables as Jutaro Nakao, Juri Ohara and Naoto Miyazaki. Kishimoto has seven submission victories and just four stoppages via strikes.

Neither of these fighters is exactly killing it right now. Hamamura has been through numerous battles, and he always has the ability to score the knockout. However, Kishimoto has never been stopped by way of a knockout of any kind. The same cannot be said for Hamamura and submission defeats. The champ has succumbed to a rear-naked choke at the hands of respectable veteran Yoon Young Kim and former Deep welterweight kingpin Hasegawa.

Kishimoto appears poised to capture the Gladiator crown. The younger fighter gave Katsunori Kikuno a run for his money in their 2012 match-up, and he has the better track record against quality competition. Hamamura can’t be counted out, but this hard-fought battle should go to Kishimoto on the scorecards.