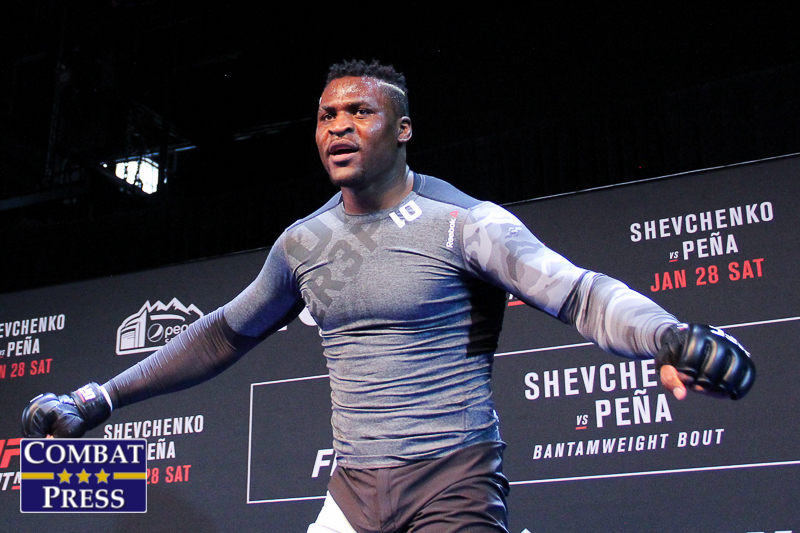 Knockout of the Year – Francis Ngannou vs. Alistair Overeem (UFC 218)

UFC 218 may have been the penultimate major UFC event of the year, but it was without a doubt one of the most exciting cards in recent memory. The show featured the Combat Press “Fight of the Year” award winner, along with an additional finalist, and also featured 2017’s “Knockout of the Year” winner.

When Francis Ngannou and Alistair Overeem met at UFC 218, it was the quintessential meeting of the up-and-coming challenger against the seasoned veteran who could derail the hype train. Overeem, a veteran of over 50 professional MMA bouts and a K-1 Grand Prix kickboxing titleholder, initially presented a sizable challenge to his younger adversary. Overeem enjoyed the experience advantage and had seen numerous heavyweight contenders rise and fall during his time as an elite fighter. However, even “The Reem” wasn’t prepared for what awaited him at UFC 218.

In the opening seconds of the fight, Overeem looked to press Ngannou against the fence and utilize his vaunted clinch game. Not only would this stifle any chance Ngannou had of unleashing his freakish punching power, but it would allow Overeem to throw the devastating knees for which he’s known. Just as it seemed Overeem’s plan was coming to fruition, Ngannou reversed the script and shrugged Overeem off of him. It was an ultimate “big brother” moment. Overeem, the more experienced and well-versed fighter, was simply pushed away by the hulking Ngannou.

With ample space now between them, Ngannou aimed to unleash the power behind his fists. It wouldn’t take long, as he avoided an Overeem strike to land an uppercut of his own that produced one of the scariest scenes in recent memory. Overeem’s head went completely back and he collapsed to the canvas, his legs stiffened by the concussive blow. We had seen Overeem knocked out before, but never like this. Ngannou’s powerful display at UFC 218 propelled him to superstar status and put the wheels in motion for a title shot down the line.