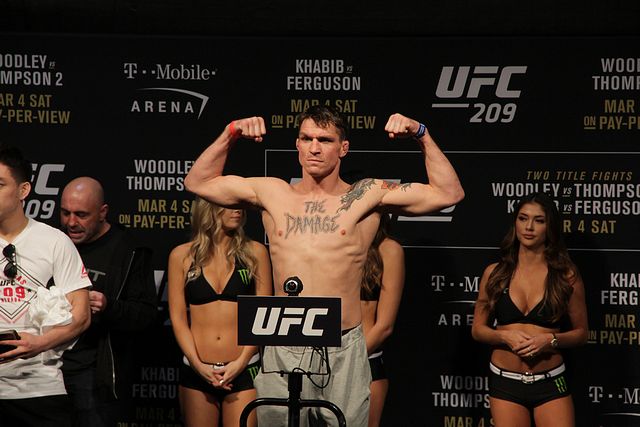 Comeback of the Year – Darren Elkins vs. Mirsad Bektic

The year 2017 brought a lot of crazy fights, and many of them nearly broke social media. Everyone loves a great comeback. When a combatant looks to be all but finished and then they dig deep to find a way to get the job done, that’s what really shows the heart of a true fighter.

When veteran Darren Elkins stepped into the cage at UFC 209 on March 4, he was a +500 underdog to the former Bosnian refugee Mirsad Bektic. Granted, Elkins was riding a three-fight winning streak, all by decision, but Bektic had finished almost all of his previous opponents and had never been beaten in his combined professional and amateur careers, dating back eight years. The first half of the fight really proved why the odds were against Elkins.

In the first round, Bektic battered Elkins on the feet, before landing a takedown, which, after much transitioning, led to Elkins in a nasty crucifix position taking elbows to the face. He looked to be on the losing end of a knock-down, drag-out brawl after just five minutes. The first few minutes of the second round were much of the same, but the momentum eventually started to shift to Elkins. The veteran was fired up, although likely down two rounds, going into the third.

In the third, instead of sticking to his striking, Bektic attempted unsuccessful takedowns over and over again until he started to wear. He eventually got Elkins down. However, that turned into a heel hook attempt for Elkins. They started to get back to their feet, but Elkins pinned Bektic to the fence and started grinding the Bosnian down. Bektic stood up, completely worn down, and started to walk away when Elkins landed a right hand to wobble his opponent. Then Elkins landed a right head kick to knock Bektic flat on his face.

That knockout was the most amazing comeback of 2017, and one that truly showcased the heart that Elkins brings to the table. It’s a big reason why he is now the 10th-ranked featherweight in the UFC.

The win by Elkins was the unanimous choice for the Combat Press 2017 “Comeback of the Year.”