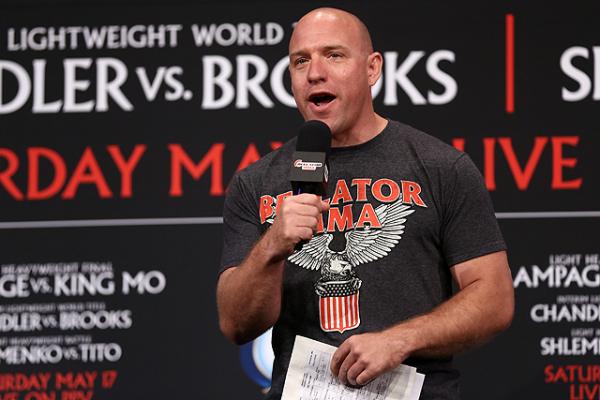 Joe Rogan isn’t the only bald mixed martial arts analyst that fans should familiarize themselves with. The UFC’s rival promotion, until very recently, had a capable analyst of its own who many consider as the best in the business, including the staff at Combat Press.

Former Bellator MMA color commentator Jimmy Smith, who left the promotion last month after failing to reach an agreement with the promotion on a contract extension, was on hand to call some of the most exciting moments in Bellator’s history in 2017. From the promotion’s first card in Madison Square Garden to highlight-reel knockouts by fighters like Michael “Venom” Page, Matt Mitrione and Paul Daley, Smith’s cageside insight and rapport with fighters made him an easy pick as the Combat Press 2017 “Broadcast Analyst of the Year.”

Smith worked with a revolving door of play-by-play partners during his nine-year career in Bellator, including Sean Grande, Sean Wheelock, former UFC play-by-play announcer Mike Goldberg and famed announcer Mauro Ranallo. Smith also lent his knowledge of the fight game to Bellator Kickboxing and Premier Boxing Champions events, and he is a black belt in Brazilian Jiu-Jitsu.

Although Smith’s immediate future is unclear after his recent departure from Bellator, there is little doubt that MMA fans would enjoy having Smith join the UFC’s stable of talented commentators like Jon Anik, Joe Rogan, John Gooden and Dan Hardy. Rogan has campaigned for the UFC to sign Smith, which should make fans worldwide salivate at the idea of hearing Smith’s voice call the action inside the Octagon.