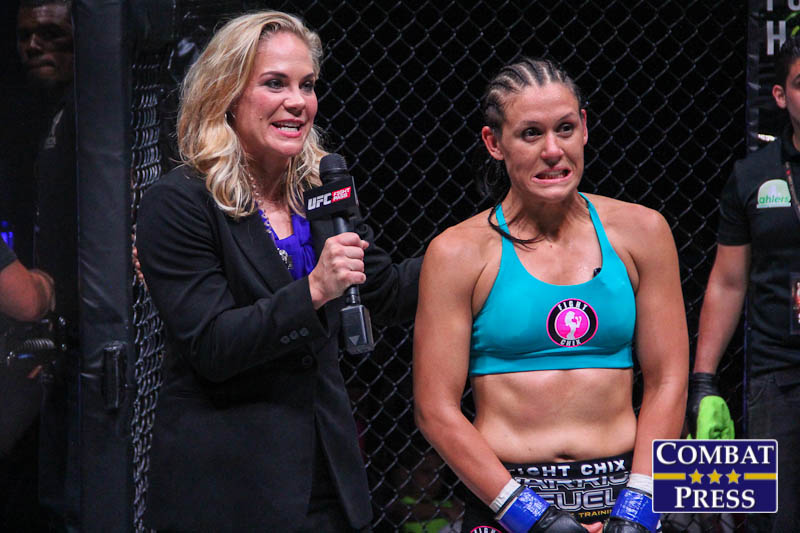 We were finally back in the win column after Sijara “Sarj” Eubanks defeated Maia Stevenson to claim her spot in the next round. There’s more to be said about that, but that’s for another day.

If you don’t know who Barb Honchak is, shame on you. Before the show, if you had asked if there was anyone that I had wanted to fight but hadn’t, that person was Barb. Not because I disliked Barb. Oh, quite the opposite. She was somebody that I looked up to, admired and wanted to test my ability against. Barb was the original Invicta FC flyweight champion and never lost her belt by defeat. I remember walking into tryouts and seeing Barb there, and I had an, “Oh shit, she’s here,” moment. Of course she was going to make the show, even if she had not competed for a couple of years. Of course, there were doubters who questioned her ring rust, but as somebody who has admired her as a fighter for so long, I was not one of them.

Gillian Robertson was somebody who I wasn’t too familiar with before the show. At the coaches’ evaluation, I did draw with her a little bit, and she is a skilled fighter, with her favorite being the ground game. I didn’t talk to her too much in the house, maybe because she was on the other team or it might be my ability to make a situation awkward… could be a combination of both. She was really quiet in the house; not that she’s a shy person — I can be quiet too, and y’all know I can be batshit crazy — she was just more reserved around us on the other team.

I loved how Eddie Alvarez brought in different coaches with different skill sets to help improve all aspects of our team. This week we got Rich Pohler, Eddie’s strength-and-conditioning coach. As a former, and sometimes current, fat kid, lifting weights has never really been my thing. I do it and I don’t mind doing it, but it takes somebody like Rich (or a strength-and-conditioning coach in general) to guide me through it. I liked the quick-burst exercises they put us through. Even my A.D.D. didn’t kick in and get distracted. I did make the mistake of telling Rich that I don’t really lift weights. I thought his eyes were going to pop out of his head. Whoops. In the future, don’t tell the strength-and-conditioning coach you don’t lift, bro. I’m working on it.

I loved Eddie’s fight prep with Barb. She’s an amazing fighter, and it was great to see him appreciate that and not want to change too much, all the while still being an excellent corner during her fight.

Gillian is a young fighter, but she’s a skilled fighter. She’s had a good amount of fights for as young as she is, and she shouldn’t be slept on, as far as the competition goes. We saw it in the Lauren Murphy and Nicco Montano fight, and we saw it with Sarj and Maia. Anything can happen in this tournament. It doesn’t matter what you’re seeded.

Before I talk about the fight, though, somebody has got to talk about Barb’s abs. I mean, hot damn, woman, do you work out? Haha. I’d kill for those abs, but my lot in life is to have a fighter body like Roy Nelson, not a chiseled one like Barb. Even after rehydrating, she had Chuck Liddell’s abs to my “Big Country” gut.

Did somebody say ring rust? I didn’t see any out there. This was a good fight by Barb and Gillian. There were good exchanges by both, but in the end Barb took it with the TKO. My hat goes off to Gillian, though. She went out there against arguably the best flyweight in the world and even cut her face open. She’s going to have a hell of a fight career.

Obviously, I was ecstatic that Barb won. Although I was intimidated by her in the past, she very quickly became one of the favorite humans I’ve ever met. She showed the world why everyone should know who Barb is and why they should never forget it.

Next on the docket, we’ve got Team Alvarez’s Hungarian badass Melinda Fabian against Team Justin Gaethje’s Rachael Ostovich-Berdon. Will Melinda’s injury cause issues going into this fight? Tune in next week to find out. If not, tune in for Rachael’s weigh-in outfit — you don’t want to miss that one.